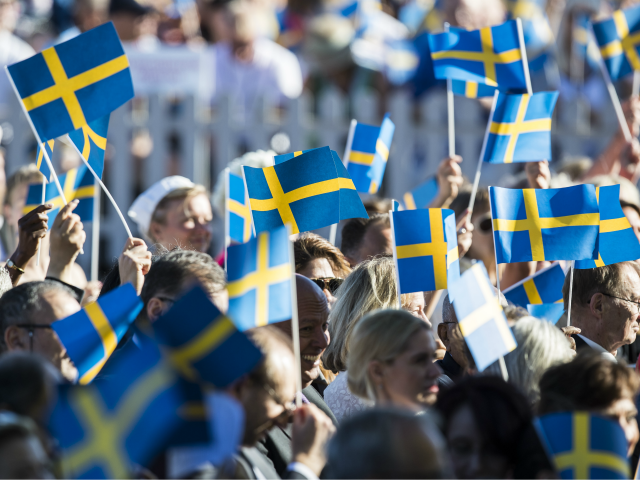 A hardcore headbanger in the Malmö no-go zone of Rosengård has claimed that Muslims carrying Swedish flags are “heretics” as the flag contains a Christian cross.

Imam Basem Mahmoud, also known as Abu Hamza, has a history of allegedly preaching hatred against Jews and others he deems “infidels”, with Swedish media having reported on his hate-filled sermons six months ago.

The police will do nothing about it.

Despite the imam being reported to the police for incitement to racial hatred, he continues to preach hateful sermons weekly at the al-Sahaba Mosque in Rosengård, Swedish newspaper Expressen reports.

According to the newspaper, the imam became angry seeing high schools students waving Swedish flags and said in a sermon: “Those who carry crosses should not be offered prayer because it is our belief that these people are perfect heretics.”

Islamic Terrorists Are Not Motivated By Hate

But of course they are. They follow the al-Wala’ wal-Bara’ doctrine.

The al-Wala’ wal-Bara’ doctrine is portrayed as a defensive policy. Given that Muslims are peaceful tolerant human beings, while non-Muslims are aggressors, imperialist-colonialist occupiers, their victims and even their potential victims, i.e., all Muslims must fight to defend themselves and retaliate against the Kuffar (non-believer), who always instigate war.,

If we continue to characterize these mass killings as events disassociated from Islamic doctrine and faith, we will fail to identify and thus defeat our enemy.

After an American Muslim who pledged allegiance to the Islamic State killed 50 people and injured 53 at a gay nightclub in Orlando, President Obama said it was an act of hate. This portrayal has led people across the country to focus on homophobia and gun control instead of exposing the real motivation so we can recognize the actual threat.

While any atrocity like this is certainly hateful, we would be remiss to simply leave it at that, because we’d fail to comprehend the complex motivations that set a man like Omar Mateen apart from other mass killers. That failure to comprehend only increases our vulnerability.

It is imperative for us to understand that the driving impulse of a man like Mateen is religious in nature. A lot is being said about how he beat his ex-wife and that he made homophobic comments to coworkers, but this behavior is part of his belief system, which allows men to beat their wives, to put homosexuals to death, and to slaughter unbelievers en masse.

This last part is stated in Surah 9:14, “Fight them [unbelievers]; Allah will punish them by your hands and will disgrace them and give you victory over them and satisfy the breasts of a believing people.” Also, “They shall be slaughtered, or crucified, or their hands and feet shall alternately be struck off; or they shall be banished from the land. That is a degradation for them in this world; and in the world to come awaits them a mighty chastisement.”

The jihadist’s act of killing, therefore, becomes less about hate and more about honor and righteousness. Those who obey Allah, who “cast into the hearts of the unbelievers terror,” who “fight them till there is no persecution and the religion is Allah’s,” will be richly rewarded for their righteous act. They fight—and they die—for the “gift of Paradise.”

“The person who participates in [Holy Battles] in Allah’s cause and nothing compels him do so except belief in Allah and His Apostle, will be recompensed by Allah either with a reward, or booty [if he survives] or will be admitted to Paradise [if he is killed]” (Al Bukhari vol 1:35).

Mohommed Bouyeri, who murdered Dutch filmmaker Theo Van Gogh, explained his motivations when he said “what moved me to do what I did was purely my faith. I was motivated by the law that commands me to cut off the head of anyone who insults Allah and his Prophet.”

It is important to understand this core motivation of Islamic terrorists in order to identify and stop them. If we continue to characterize these mass killings as events disassociated from Islamic doctrine and faith, placing the blame totally on personal hateful impulses, we will fail to identify our enemy. If we can’t identify him—if we can’t name him—we won’t know him, which means we can’t defeat him.

These Are Acts of Religious War

We will also fail to recognize that this is an act of war by a group of people who have no wall of separation between the religious and the political. As terrorism expert Sebastian Gorka said, “stop calling the Orlando shooting a hate crime. Nobody should be shocked by the attack. This is what jihadists had been planning to do after Paris, after Brussels.” This isn’t a hate crime; it’s not a tragedy, like a train being derailed. “This is part of the Global Jihad strategy. It’s not an accident—it’s a war against America. . . . it is part of an ideological military assault on the United States of America.”

It is, in reality, a religious war, driven by religious doctrine (in this case radical Islam), and carried out with religious impulses. Continuing to call this a hate crime and failing to grasp what actually defines and motivates these people will blind us to their methods, practices, and plans.

It will also cause us to look inward at ourselves instead of outward at the enemy storming our gates. We will wrongly assume we have contributed to the hate in some way, that we have done something to make them lash out and attack us. We will then erroneously conclude that there is something we can do to make them not hate us anymore. This is what leads to political correctness and weakness when we need to be bold and courageous.

The fact is we can do nothing to appease radical Islamists. They are not motivated by our policies, words, and actions, no matter how much they reference them to manipulate us. They are motivated by who we are: We are unbelievers. We are, by our very nature an offense to them. That goes for all of us, whether we are straight, gay, male, female, black, or white. We are in this together, facing an enemy who wants to kill us equally. Our response, therefore, should be a unified one, standing together against a common foe.

That foe does not act alone. Because these individuals are motivated by a divine directive and act with a communal mindset, they don’t need orders from the leaders of the Islamic State to act. For one thing, those orders have already been issued. In 2014, the chief spokesman for the Islamic State called for all supporters to kill unbelievers “in any manner or way, however it may be.”

“Do not ask for anyone’s advice and do not seek anyone’s verdict,” said Abu Mohammed al Adnani. “Kill the disbeliever whether he is civilian or military, for they have the same ruling.”

If they want to shoot up a Christmas party where Christians are gathered, ISIS sympathizers can do that, according to their faction’s leaders. If they want to target U.S. military members because that’s their particular bugaboo at the time, then they are free to do that. Or they can target a gay nightclub, killing homosexuals with the same hand of judgment as their brethren in the Middle East who execute homosexualsby the thousands.

To Them, War Is a Means of Peace

Whatever their target, these “soldiers of Islam” are motivated by the same impulse: honor, faith, and the glory of god. In 1998, Osama bin Laden made this clear, saying, “I am one of the servants of Allah. We do our duty of fighting for the sake of the religion of Allah.” The Taliban has stated that those who wage war on unbelievers are bound by the command “to restore to this world the light of divine justice…. For to die in the cause is to be sent immediately to paradise.”

Whatever their target, these ‘soldiers of Islam’ are motivated by the same impulse: honor, faith, and the glory of god.

How these men and women feel about the infidels—whether they hate them or not—doesn’t really matter. Of course, if they think Allah considers unbelievers to be evildoers who need to be eradicated by any means necessary, then they probably will hate them—for “righteousness sake.” But it’s not a prerequisite. What they desire is to bring glory to Allah.

They don’t need marching orders or emails with instructions. They don’t need a green light from ISIS headquarters. All they need is the courage and the opportunity to do what Allah has commanded—because, according to their faith and doctrine, it is the right thing to do.

Abu Musab al-Zarqawi, the militant Islamist from Jordan who ran a paramilitary training camp in Afghanistan, said Allah commanded them to strike unbelievers (the Kuffar), to “kill them and fight them by all means necessary to achieve the goal. The servants of Allah, who perform Jihad to elevate the word of Allah, are permitted to use any and all means necessary to strike the active unbeliever combatants for the purpose of killing them, snatch their souls from their body, cleanse the earth from the abomination, and lift their trial and persecution of the servants of Allah.

“The goal must be pursued even if the means to accomplish it affects both the intended active fighters and unintended passive ones such as women, children and any other passive category specified by our jurisprudence.”

These are the “defenders of Islam and its sanctity” who wear, as Hassan al-Smeiksaid, terrorism as “a badge of honor on our chests until Judgment Day.”

Assimilate, Fight, Or Be Slaughtered

The words of Mohammad Sidique Khan, who bombed a subway in London, should ring in the ears of every politician, law enforcement official, and American citizen: “Our driving motivation doesn’t come from tangible commodities that this world has to offer. Our religion is Islam—obedience to the one true God, Allah, and following the footsteps of the final prophet and messenger Muhammad… This is how our ethical stances are dictated.”

In other words, assimilate or die. This is unacceptable to every liberty-loving American, and it’s why we must fight back with courage, solidarity, and strength, without appeasement or apology. We must be willing to look our enemy in the eye as a united free people and call him by the name he has given himself—the name of Islam.

Denise C. McAllister is a journalist based in Charlotte, North Carolina, and a senior contributor to The Federalist. Follow her on Twitter @McAllisterDen.
.