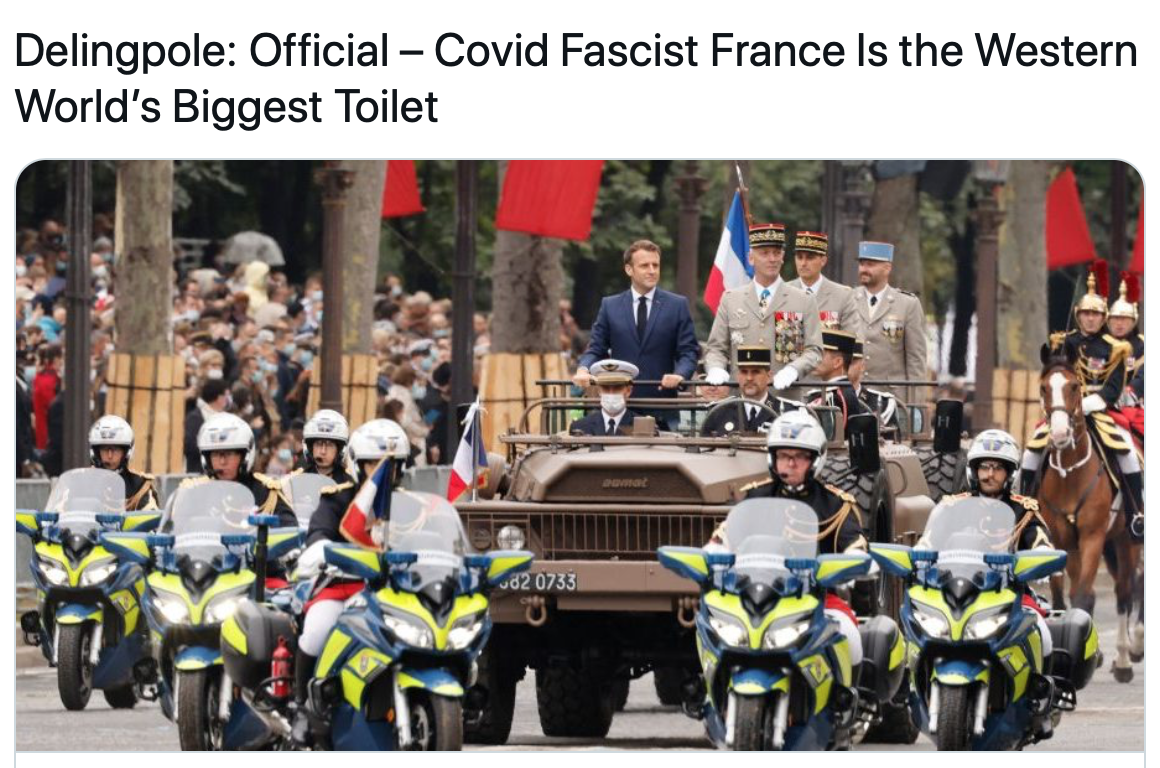 As Kurt Zindulka reported for Breitbart, the French president has just announced the most draconian Chinese coronavirus measures any vaguely civilised country has yet dared attempt:

…citizens of France will either have to scan in via QR code or present a document proving that they have either been fully vaccinated or have recovered from the Wuhan virus to enter businesses such as restaurants, bars, cinemas, theatres, and shopping centres as well as to use public transport… Starting from July 21st, anyone over the age of 12 in France will have to present a “health pass” to attend concerts, festivals, shows, or to enter amusement parks.

Mr Macron has also announced that starting on September 15th, healthcare workers and volunteers at care homes will be required to be vaccinated. He said that vaccination is a “matter of individual responsibility… but also a matter of our freedom.”

Even worse, Macron has warned in a televised address to the nation, these new jabs may at some stage become compulsory for the entire country.

Let no one be under any illusions: if all this comes to pass, then France is totally over.

Macron: Vaccine Passports Will Be Mandatory for Restaurants, Bars, Transport in France https://t.co/oTaTzivYwb

Sure, in fairness to the pint-sized Mummy’s boy French president, you could argue that France was already well past its sell-by date, long before Macron toddled into the Élysée Palace  – what with its sclerotic, subsidised, unionised economy, its demographic time bomb, and its overabundance of terrorist incidents.

But these draconian anti-Covid measures take France into a new realm of lunacy altogether.

Most of us are old enough to remember the era when France, Paris especially, was the most romantic destination on the planet thanks to its winning combination of fine wine, gastronomy, outrageously beautiful women, berets, onion sellers and so on.

The French are taking to the streets tomorrow July 14 to fight back against vaX passports for entry to living life….#NoVaccinePassportsAnywhere pic.twitter.com/BagYfLLjbA

I wish them all the best. It’s true that as an Englishman I’m supposed to consider the French my natural enemies. But actually, I love and admire them. My two favourite works of fiction — Alain-Fournier’s Le Grand Meaulnes and Zoe Oldenbourg’s The World Is Not Enough — are both French; my favourite food is fresh, pan-fried foie gras; and I once had an interesting fling with a French bird I met at a New Fast Automatic Daffodils gig in Montpellier near where I was living while writing my first novel. What I like about the French is that they are so cussedly French: they do what they want and they are happy in their skin.

At least, they did and they were.

Will they lead the most important revolution in the history of the world, against a globalist regime which is far, far more evil and oppressive and powerful than the Bourbons ever were?