Imagine the news coverage if this had been a bunch of White boys. 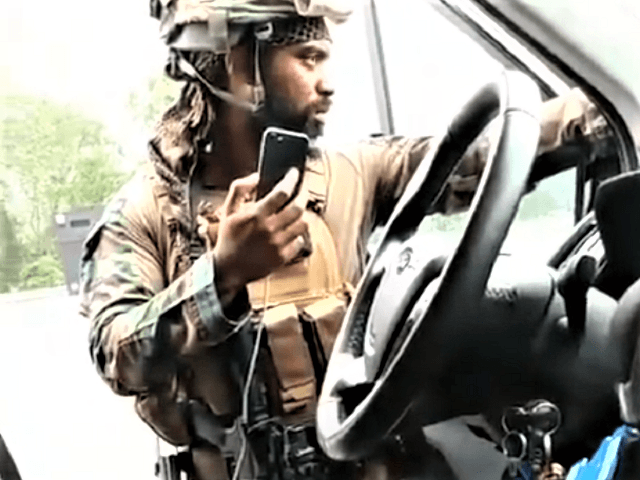 Members of the “Rise of the Moors” armed militia appeared in a Massachusetts court Tuesday after being charged with multiple crimes over the Independence Day weekend. The defendants denied the court’s jurisdiction and claimed to have committed no crimes.

Massachusetts State Police arrested 11 people on Saturday who allegedly claimed to be members of a group known as the “Rise of the Moors,” Breitbart Texas reported. The arrests followed an hours-long standoff with the armed members on Interstate 95 near Wakefield after suspects reportedly said they do not “recognize our laws.”

What do we know about the “Rise of the Moors?”

1: Who are the identified members of the group?

Boston.com identified the following members of the group who police arrested on Saturday:

2: What charges do the arrested members face following the nine-hour standoff?

.
According to the Boston Herald, the men are charged with the following in a Massachusetts court:

3:  The members of the group claim the government has no jurisdiction over their affairs.

During a Zoom hearing, multiple members of the group claimed the court has no jurisdiction over them, the Boston Herald report continued. Several members provided fake names. Two refused to provide any names at all.

During the nine-hour standoff, the members of the group told police they were not carrying gun licenses and they did not recognize state laws, The Washington Post reported.

The “Rise of the Moors” is based in Pawtucket, Rhode Island, according to its website. The Washington Post reports a claim from Mark Pitcavage, a senior research fellow at the Anti-Defamation League’s Center on Extremism, that the men who were arrested are “adherents of the ‘Moorish Sovereign Citizens.’” They are part of a group that reportedly believes they are part of a sovereign nation and are thus not subject to U.S. law.

Moors are not ‘Sovereign Citizens’, as sovereignty does not stand alone, sovereignty and nationality can be considered synonymous. The record show that the Moors are the organic or original sovereigns of this land – America. When we declare our nationality as Moorish Americans we are taking back the position as the aboriginal people of the land, to which the sovereign power is vested in.

5: Claims by the group about police, government, and violence during the armed standoff with state police.

A spokesman for the Rise of the Moors posted claims on social media that “We’re not anti-government, we’re not anti-police, we’re not sovereign citizens, we’re not Black-identity extremists.” During the video, he repeatedly told the officers they would do nothing to escalate the situation or threaten the officers.

“I’ve expressed to you multiple times we are not anti-government.”

An armed uniformed man speaking with MSP negotiators in the middle of a standoff on 95 as it’s being live streamed on an IG account for the Moorish Constitutional Convention Committee. @wbz https://t.co/swiYDUFnIT pic.twitter.com/2oKJqrGg5G

“You can imagine 11 armed individuals standing with long guns slung on an interstate highway at two in the morning certainly raises concerns and is not consistent with the firearms laws we have in Massachusetts,” Massachusetts State Police Colonel Christopher Mason said during a press conference over the weekend. “I understand that they have a different perspective on that. I appreciate that perspective. I disagree with that perspective.”

State police officials warned, “No threats were made, but these men should be considered armed and dangerous.”

6: Claim of Morocco/U.S. treaty as a basis for sovereignty.

The group claims their sovereignty is based on what retired FBI special agent Ken Gray called a “bogus treaty,” NBC 10 in Boston reported.

“No such treaty existed, but they claim there was a treaty that allowed them to operate in the country without being citizens of the country,” Gray explained.

On their website, the Rise of the Moors cite a letter from President George Washington to the Sultan of Morocco in 1789 that reads (in part, emphasis original):

The encouragement which Your Majesty has been pleased, generously, to give to our commerce with your dominions, the punctuality with which you have caused the Treaty with us to be observed, and the just and generous measures taken in the case of Captain Proctor, make a deep impression on the United States and confirm their respect for and attachment to Your Imperial Majesty.

7: Why were the members of the “Rise of the Moors” in Massachusetts and armed?

The spokesman for the group told police they were headed from Rhode Island to Maine for “training,” WMTW ABC8 reported. The Maine Information Analysis Center, the intelligence arm of the state police, said they did not know the final destination for the alleged “training” encampment.

The members of the group who appeared before the Massachusetts judge pleaded not guilty. The judge ordered the adult men held without bail pending a “dangerousness hearing” scheduled for Friday, July 9. The juvenile is reportedly being held pending a future arraignment date, the Boston Herald notes.