The appeal comes amid talks to revive the nuclear deal to prevent Iran from developing a nuclear weapon.

Scumbag Guterres. There never was a “deal”. So let’s just pretend there was one and let’s treat the genocidal mullahs as if they were partners on the world stage.
.

UN Secretary-General Antonio Guterres appealed to US President Joe Biden’s administration to lift or waive all sanctions on Iran as agreed under a 2015 deal aimed at stopping Tehran from developing a nuclear weapon.

In a report to the United Nations Security Council, Guterres also urged the United States to “extend the waivers with regard to the trade-in oil with the Islamic Republic of Iran, and fully renew waivers for nuclear non-proliferation projects”. 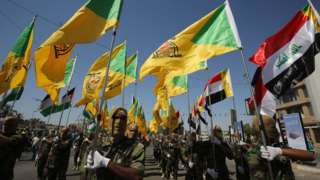 The militias threaten revenge after facilities in Iraq and Syria linked to drone attacks are bombed. Ethiopia-born ex-model jailed for helping 21/7 bomber was handed £1.4million in legal aid – dwarfing the amounts victims got in compensation