The Taliban appear to have learned from Western politicians that there’s great value in playing the media in support of their cause, as seen this week when they claimed with a straight face that women’s rights will be respected in Afghanistan.

On the same day this propaganda was being uttered, Taliban fighters shot and killed a woman in Takhar province after she went out in public without a burqa, according to The Associated Press. The Taliban have said women will have to wear hijabs but not burkas.

None of them shares our values.

“We won’t be able to solve the Afghanistan question through migration to Germany.”

800 Afghans, including translators, who helped French troops on the ground as part of the US-headed coalition that invaded Afghanistan in the wake of the September 11, 2001, attacks have been taken to French territory.

Sounds like the glorious French army had more  translators than feet on the ground. 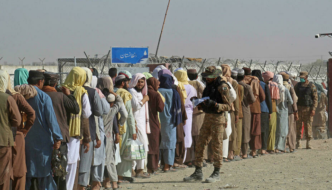 How fucking f*kcing cuckoo do you have to be to import tens of thousands of unvetted Afghans two weeks before the 20th anniversary of 9/11. If that’s not intentional, what is?

One thought on “A Kinder, Gentler Taliban?”