Iran’s police force daughter to hang her own mother in jail, while the family watches the execution 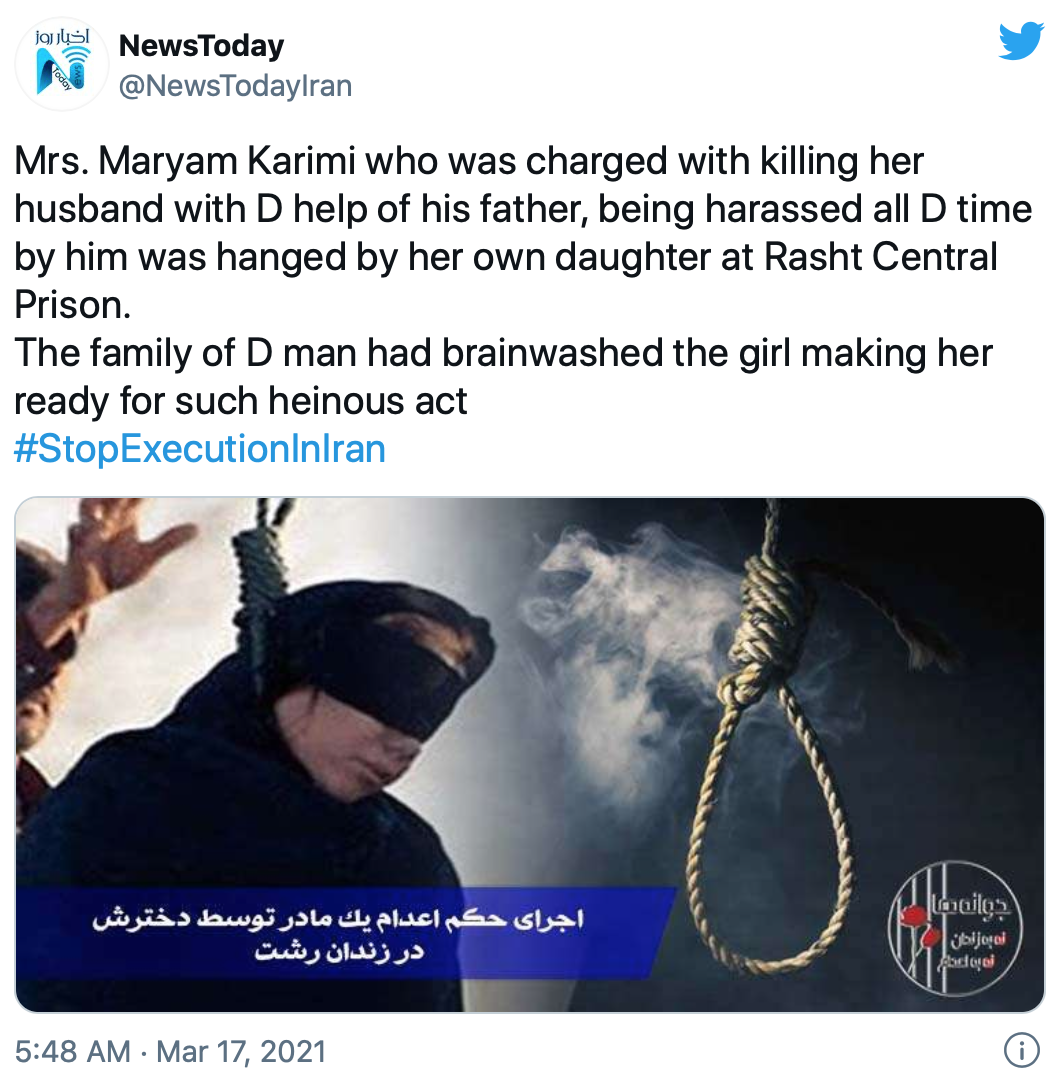 On Saturday, March 13, 2021, a woman named Maryam Karimi was hanged in Rasht Prison in Iran.

.
Like many other girls in Iran, she was sold into forced-marriage, and was subjected to domestic violence and rape. The regime court court denied her repeated requests for divorce and protection from her abusive husband as he continued to torture her. She was forced to defend herself and killed her husband. After she was arrested, authorities forced her own daughter to take part in the execution and tie a rope around her neck while the rest of the family watched.

.
No human being should be subjected to such inhuman torture.
The Iranian terrorist regime and its affiliates in the Middle East (Shiite militias and terrorist organizations) implement the Islamic penalty code of 1,400 years ago which include public amputations, floggings, executions by hanging and even stoning to death.

.
The Iranian people are being brutally oppressed by a religious regime that uses “Islamic scriptures” to justify the execution of children, minorities, human rights activists, Journalists, protesters, etc.

Yes indeed. It’s also known as sharia and it is no different from any other Islamic hellhole where Islam has the upper hand. It is us ignorant Western fools who are being hoodwinked by irresponsible journaille that the Iranians somehow got their Islam wrong. That is not the case. They are practising the real Islam.

.
Iranian prisons (torture camps) are full of innocent people imprisoned for their protests against gender apartheid in Iran.
Under Iranian strict modesty laws women are not allowed to dance, sing, show their hair in public or even leave home without the permission of the “male guardian”.

.
It is well known that Iran is the world’s biggest jailer of Innocent women including journalists, rape victims, women’s rights activities and Human rights lawyers.

.
Iran’s regime holds the infamous record of the world’s top executioner per capita. It also ranks first for most number of juvenile executions in the world. Women are also victims of the death penalty in Iran, with dozens of women hanged in public squares every year.

.
The regime in Iran uses the death penalty as a tool to suppress and silence a disgruntled society the majority of whom live under the poverty line, are unemployed and deprived of freedom of speech.

.
Sadly, the UN is turning a blind eye to Iran’s regime continued practice of unjustified executions and inhuman torture methods.

The UN always does.  Because the UN is totally corrupt and run by the OIC.

2 thoughts on “Iran: regime forces daughter to hang her own mother”