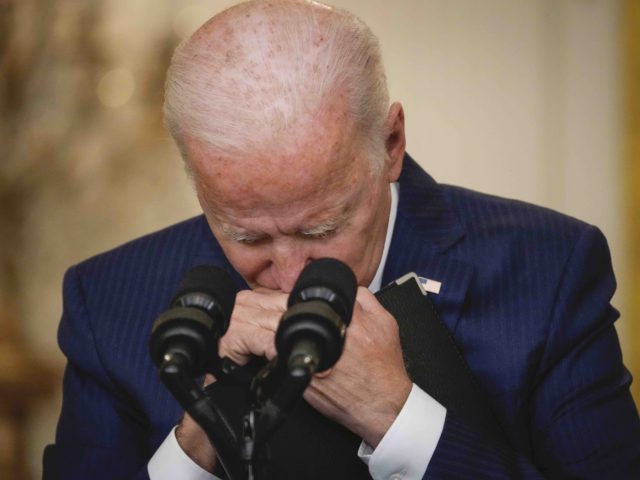 “The first person I was instructed to call on….” What is going on?

David Flint The Spectator Australian 28 August 2021
.
In a world increasingly dominated by the Chinese communist-led Beijing-Moscow-Tehran Axis, it is timely to ask the political class, much of the commentariat and other elites a series of questions beginning: are you still happy with your preferred candidate in the 2020 election, Joe Biden?
.
With his ignominious surrender to the Taliban, this question is particularly appropriate for Australians who are even now more dependent for our defence on a United States which, under the Biden presidency, is clearly unreliable. We even had to go to Poland to buy Pfizer vaccine supplies whicen Biden refused to sell us, one of America’s closest allies, some of his surplus ageing stocks.
.
Biden’s attempt to explain the Afghan disaster was duplicitous, claiming that he inherited this from President Trump. No so, Trump made it clear that the Taliban would face the full force of the US military in a carefully conditioned withdrawal if they caused any harm to Americans or American interests in Afghanistan. Crucially, a small special-operations force would remain to take direct action. The Taliban know, as do all malefactors, never cross Trump, the most effective president since Reagan. Trump would never have been so incompetent and so callous to leave behind civilians, friends, allies and the latest equipment and would have locked in intelligence-gathering and machinery to enforce any agreement before withdrawing US troops.
.
Afghanistan is the latest of the never-ending Biden disasters. Another is the mounting price of petrol, the inevitable result of Biden making the US once again dependent on Middle Eastern oil. Another is the return of inflation, now 5.4 per cent, with a likely impact across the world’s financial markets. Then there is his destruction of women’s sport, something which has already infected the Olympics.
In direct contrast to Trump who stood up strongly against Beijing, Pyongyang,Tehran and Moscow, Biden has shown himself curiously accommodating towards the Wests’ enemies. By waiving Trump’s sanctions on the Iranian oil trade and allowing Tehran access to frozen funds he only encouraged the mullahs’ excesses, so much so that Britain, France and Germany have just condemned Iran’s acceleration of uranium enrichment, a clear breach of the 2015 Obama-Biden deal with Iran now close to having nuclear weapons.
.
Then he lifted the sanctions on the Nord Stream 2 pipeline from Russia to supply natural gas to Germany, a gift to Russia and a weakening of the Western alliance. Unlike Trump, he has been weak with China, justifying their human rights crimes as ‘cultural differences’, even dismissing the genocidal measures against the Muslim Uighurs and justifying internal controls and the winding down of Hong Kong’s freedoms as methods for unifying the country. Biden fails to display any of Donald Trump’s strength in standing up to the Chinese communists over their abuse of the world trading system and their theft of intellectual property.
In the meantime, he is undermining the security and the health of the nation by illegally throwing open the southern border, allowing criminals, as well as those suffering from the Wuhan virus, (and with the fall of Afghanistan, terrorists) free entry into the United States and then imposing such illegal immigrants on republican states.
.
Meanwhile education, administration and the armed forces have been made subject to Marxist propaganda in the form of critical race and other ‘theories’, while ensuring little respect is shown to the origins and exceptionalism of the United States.
.
It was not only that Biden’s failings and Trump’s strengths were obvious, the 2020 election was highly questionable. This was not only from the way the scrutineers were neutralised or expelled, or counting was held in their absence, but also from the case brought by Texas and seventeen states on the way the election victory was centred on constitutional breaches. On this and other cases a judiciary frightened by threats of violence and afraid of consequential disorder hid behind technicalities to avoid hearing many cases on the merits, despite Trump’s attempts to appoint real judges to the courts.
.
Even before the election, Biden supported the law-breaking Marxist organisations BLM and Antifa to wage a reign of terror and a campaign for police defunding in selected blue states. Already in obvious cognitive decline, Biden had a questionable background, known for lying about his academic record and degrees and never having real life experience outside of politics. In fact, he came to Congress allied strongly to the segregationist wing of the Democratic party.
.
What is exceptionally worrying is that evidence continues to mount confirming that the Biden family has long been engaged in the sale of access and influence into the heart of Washington. This was to foreign oligarchs, most notably from Russia, the Ukraine and communist China. Those who preferred Biden cannot hide the fact that much of this corruption was known before the election, especially from the research of Peter Schweizer, president of the Government Accountability Institute. It is reasonable to suspect therefore that Biden was in the nature of a Manchurian candidate, and that he was and is severely compromised by the activities of the Biden family. Certainly, the Beijing-Moscow-Tehran- Kabul Axis is very well aware of his weaknesses and will take advantage of them.
.
If anyone were in any doubt as to Biden’s competence, the recently revealed letter from Osama bin Laden, instructing Al-Qaeda not to kill Biden is relevant. Bin Laden argued that if Biden were to succeed Obama, he would make an incompetent president and would act in the interests of Al-Qaeda.
.
Biden was never worthy of the great office once held by Washington, Lincoln and Reagan. Rather than impeached, former UK Afghanistan Commander Colonel Richard Kemp says Biden should be court-martialled for betrayal. So my question remains to the elites, should you not now admit that you were terribly wrong?