Now they demand “booster shots” to prove that you are “fully vaccinated”. 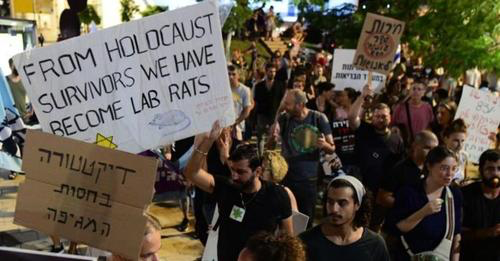 The Jab That Broke The Camel’s Back: Thousands Protest in Tel Aviv Over Israel’s Vaccine Passport That Now Requires Citizens to Take Booster Shot to Be Considered “Fully Vaccinated” –

At the end of last month, Israeli Health Officials announced that any individual who has not received a 3rd Jab within 6 months of their second dose would no longer be considered “fully vaccinated” under the countries vaccine passport system.

There have even been rumblings of a 4th mandatory shot that could be right around the corner.

People who do not get the booster will be back at square one, no longer having access to everyday activities – just like those who never took the jab in the first place.

So far, almost 2/3 of all Israelis have played along with the government’s restrictions and have been fully vaccinated, but now that a 3rd shot has been mandated, the people are coming together to protest en masse against the restrictive vaccine passports.