Politicians who constantly talk climate change are making our country weaker and poorer, not stronger.

And they can never tell us what will replace the export revenue we receive from coal, which pays for our enormous welfare bill, new schools, new hospitals and the infrastructure we enjoy.
.
Only an intellectual lightweight would advocate for such economically destructive policies.

Is it any wonder that there is so much hostility and anger towards politicians?

Political elites and many in the media who peddle the nonsense mouthed by these elites are complicit in the destruction of the freedoms and, dare I say, the prosperity we have worked for and come to love.
.
This trend is worldwide.
.
Look at Germany where both major parties hovered around 25 percent in the vote count. Unheard of.
.
Then you see a “conservative” leader in Boris Johnson going mad over climate change, cosying up to the geriatric Biden and his jet-setting Climate Envoy, John Kerry.
.
Have a look at the polls here this week. In fact, you can sum up what is happening here simply.
.
Our political leaders are presiding over the greatest theft of our civil liberties and the sledgehammering of our economy.
Josh Frydenberg spending $90 billion on JobKeeper.
But so much for a reforming, fiscally responsible Treasurer.
And these people wonder why Australians are taking to the streets?
.
Children have been ordered to months and months of at-home learning. Parents are beside themselves wondering where on Earth the next dollar will come from.
Industry bans and lockdowns all over the country.
.
Australians denied the dignity of work, yet the political and bureaucratic class stay on full salary.
.
Many businesses are gone for good, never to return.
The Prime Minister refuses to address these public grievances and instead flies to America to speak with Biden about climate change and gifting Boris Johnson a packet of Tim Tams.
.
Our politicians are obsessed with talking about net-zero emissions but give every indication that they’re just repeating the lines of the bureaucrats and have done no homework of their own.
.
If this continues, the future we face is grim.
We are looking down the barrel of an Australia filled with politicians, consumed with green ideology and stealing our freedoms.
.
And Scott Morrison and his henchmen wonder why the Coalition are down in the polls.
.
Blue collar workers in Western Sydney have had enough of the Berejiklian lectures.
.
That’s before we get to Dr Chant and the unprecedented control that the public health bureaucrats have had over us and our way of life.
Look at Western Australia. Is there even a Liberal Party left in Western Australia?
Political elites, everywhere, wrecking the joint.
.
What will be left?
As Janet Daley points out in London’s Daily Telegraph, “Perhaps we are living through the dying moments of what will one day be seen as a golden age of mass prosperity and individual freedom that is destined to become mythic in the eyes of later generations.”
.
You see, in the UK they are facing the realities of the political establishment’s obsession with climate change and the impoverishment it will bring to our way of life.
.
Boris Johnson has taken up the cause – hook, line and sinker.
We see Liberals like Matt Kean advocating this nonsense here.
.
But Janet Daley bells the cat, “The chief objective of twentieth-century democracy was to equalise the living conditions and economic opportunities of entire populations. Whatever your view of the urgency of climate change, it is critically important to recognise, she writes, that many of the steps now being proposed (in some cases, enshrined in law) to deal with what is considered to be a global emergency… are designed precisely to reverse that progress.”
She is right.
.
Now remember, in November everybody who is anybody will be on a junket to Glasgow, with all the problems of the world and they will be talking about climate change.
.
The Godfather of climate change is a bloke by the name of Maurice Strong. He is now dead. A Canadian businessman and an oil and mineral billionaire. He was President of the Power Corporation of Canada. 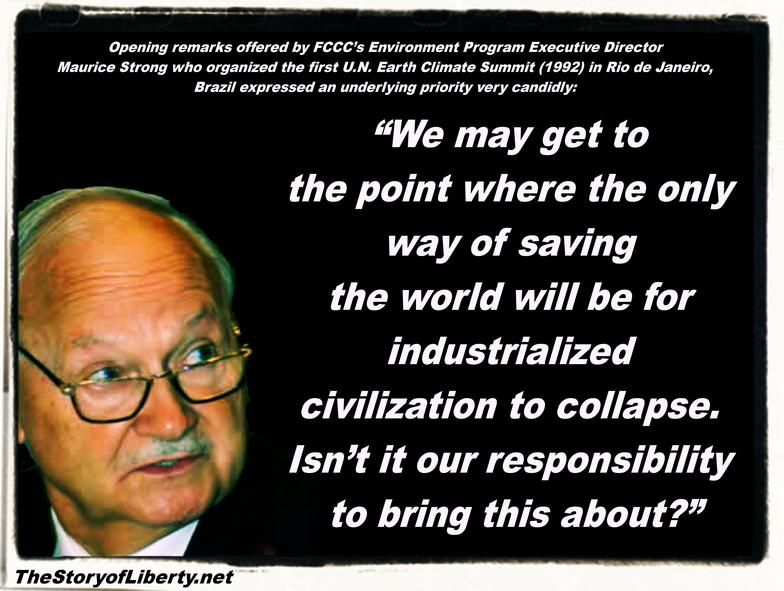 He got the United Nations bug and was credited with forming the United Nations Environment Program. We live with his legacy today.
.
In 1992 he said, “We may get to the point where the only way of saving the world will be for industrialised civilisation to collapse. Isn’t it our responsibility to bring this about?”
.
When he died in 2015, Quadrant magazine wrote an article about him, the Godfather of climate change.
.
In the opening paragraph the Quadrant magazine said, “The consummate sleazebag thief and all-round corrupto-crat who launched and shaped the UN effort to rid the world of carbon dioxide has died, appropriately enough as his heirs gather in Paris to rob the world blind. Good riddance.”
.
We are told, aren’t we, to listen to the “experts” and “listen to the science.”
Well, Professor Steven Schneider was the lead author of the intergovernmental panel on climate change reports of 2001 and 2007. He was the Stanford Professor of Climatology. He died in 2010.
.
He said of global warming, “We need to get some broad-based support to capture the public’s imagination… so we have to offer up scary scenarios, make simplified, dramatic statements and make little mention of any doubts… each of us have to decide what the right balance is between being effective and being honest.”
.
Christine Stewart, the former Canadian Minister for the Environment said, “No matter if the science of global warming is all phony, climate change provides the greatest opportunity to bring about equality and justice in the world.”
.
And what about the Emeritus Professor of Ecology at the University of Santa Barbara, Daniel Botkin, who said in 2007, in a Wall Street Journal article, “The only way to get our society to truly change is to frighten people at the possibility of catastrophe.”
.
And don’t forget the founder of the UN Environmental Program, “We may get to the point where the only way of saving the world will be for industrialised civilisation to collapse. Isn’t it our responsibility to bring this about?”
.
If this stuff doesn’t frighten you, you mustn’t have a pulse.
How many of these Glasgow disciples, whether they be Biden or Johnson or Morrison have done any homework on this?
.
This stuff is about standing the capitalist free world on its head.
.
Christina Figueres, of the UN Framework Convention on Climate Change said in February 2014, in Brussels, “This is the first time in the history of mankind that we are setting ourselves the task of intentionally, within a defined period of time, to change the economic development model that has been reigning for at least 150 years since the industrial revolution.”
.
So there you are.
.
No matter that Bjorn Lomborg, the Danish author, world authority and visiting Professor at the Copenhagen Business School wrote in 2017, “The findings from the major climate models are clear: achieving the 1.5 degrees centigrade target would require nothing less than the entire planet abandoning the use of every single fossil fuel in less than four years.”
.
He said that in 2017, the four years is up.
.
In a 2010 interview, the UN Intergovernmental Panel climate change official, Ottmar Edenhofer said of the climate change summit in 2010, like this one in Glasgow in November.
Ottmar Edenhofer said, “Basically, it is a big mistake to discuss climate policy separate from major themes of globalisation. The climate summit in Cancun at the end of the month is not a climate conference, but one of the largest economic conferences since the Second World War… one has to free oneself from the illusion that international climate policy is environmental policy. This has almost nothing to do with environmental policy anymore. This is about wealth transformation.”
.
But then the public didn’t understand. I think they understand now.
Look at the vote in Germany. Look at the polls here.
.
Whenever you hear a politician talking net-zero, it equals sending the country broke and trashing the life you want your children to enjoy.
.
I have called it, for years, a national economic suicide note and so it is.
But the Prime Minister and the modern-day Liberal Party, same with Labor and some parts of the Nationals, do not seem to understand this or, even worse, won’t speak out against it.
.
Well may we ask are our best days behind us?
.
*****
Whenever you hear a politician talking net-zero, it equals sending the country broke and trashing the life you enjoy.
.
As Janet Daley points out in London’s Telegraph, “The chief objective of twentieth-century democracy was to equalise the living conditions and economic opportunities of entire populations. Whatever your view of the urgency of climate change, it is critically important to recognise that many of the steps now being proposed (in some cases, enshrined in law) to deal with what is considered to be a global emergency are designed precisely to reverse that progress.”
.
Daley continues, “The quite explicit message, not only of the lunatics who block motorways but of the wider environmental movement, is that too many people can now afford too much. This is the real force of the new incarnation of anti-capitalism: far too great a proportion of the population can now spend money in ways that are potentially dangerous to the environment… [so, the answer?] make sure, by strategy or edict, that either they are unable to afford their irresponsible behaviour or are actually banned from doing so. Make no mistake, this is the moral core of the militant environmental cause…”.
.
This is the political establishment’s end goal.
.
The same political establishment who have not sacrificed a single dollar during the past 20 months, while the majority of Australians have suffered.