Australia is heading towards Wokestan. It’s not a joyride.

David van Gend The Spectator Australia 30 October 2021
.
I know a thing or two about terminal illness, and it seems to me that this patient, our country, has lost the will to live. If the Morrison government goes gentle into Glasgow’s good night, what should grieve us most? That our hard-won sovereignty should be surrendered to the eco-socialists of the United Nations? That a pro-business party should subject business and industry to net zero’s suffocating regulations? That a Christian prime minister should bend the knee to an apocalyptic nature-cult that terrifies our children?
.
The biggest emitter of the elixir of carbon-based life, President Xi, sends his apologies for Glasgow. He is too busy burning Aussie coal to smelt Aussie steel to build more battleships for the world’s largest navy. But our Prime Minister will be there, like a palliative care nurse holding the hand of a nursing-home nation that can no longer make its own way in the world. 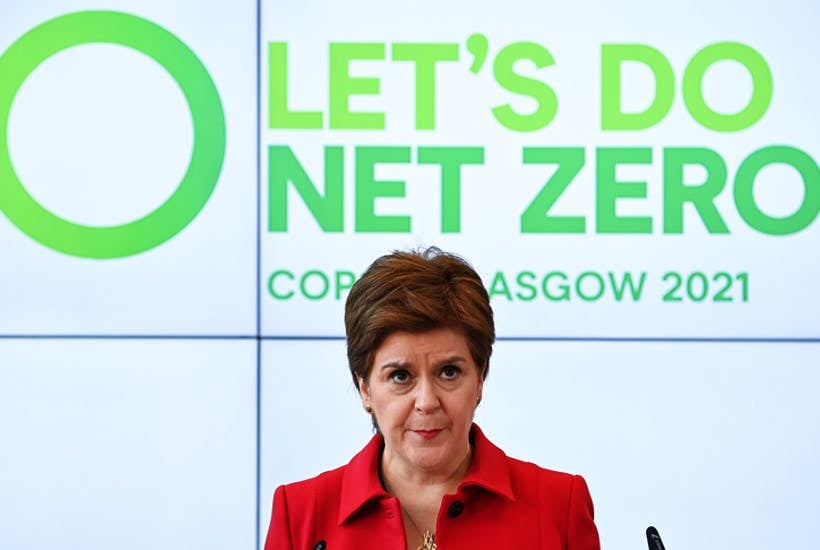 I know a thing or two about the grassroots of Queensland’s Liberal National party, and long-time members tell me the party will be getting net zero support from them in future. I tell them the PM would not go lightly to Glasgow; that only the gravest of reasons could justify this cultural and economic self-harm.
.
The PM hints darkly at the national security implications if we don’t toe the net zero line (read Aukus and globalist Joe’s quid pro quo that if he sells us subs, we must sell our soul).
.
The Reserve Bank governor warns that a failure to get with the global agenda means woke investors might withhold money for – shock, horror! – green energy projects.
.
The self-immolating Business Council of Australia assures us we will thrive under net zero with all those clean green jobs. Wrap small business in green tape and it will spread its wings! Cull Australia’s herd of belching cattle and the tofu industry will take off! It’s as if we celebrated the economic possibilities of the pandemic by pointing to all those nose-swabbing jobs. Green if not clean.
.
So the logic goes thus: to keep national security, we must compromise national sovereignty. To keep international investment, we must submit to international diktat. How miserably weak we have become.
.
The PM’s position, I think, is that the sea of climate groupthink has risen so rapidly, we now must sink or swim; it is not the alleged impact of global warming but the real impact of global politics that forces his hand. Perhaps he feels the shame of this surrender as much as LNP members do, but if the Biden-Boris-Business Council-Media Axis of Woke cannot be overcome, then negotiate terms.
The deputy PM still has some fight in him. He tells Sky News a net zero target would make ‘no difference at all’ to global temperatures. Barnaby is right: he echoes Chief Scientist Finkel’s response to former Senator Ian Macdonald’s question about the effect on global temperature by 2100 if the entire Australian economy was shut down (being 1.3 per cent of global emissions). The answer: ‘virtually nothing’.
.
The tragedy is that this economic pain is for no detectable environmental gain, yet Barnaby’s government can’t get that message through. Conservatives, with rare exceptions like Senator Matt Canavan, have not made a dent in the mass delusion of ‘man-made climate catastrophe’ that is driving us off the cliff like walruses fleeing an Attenborough film crew.
.
John Howard reminds us you can’t fatten a pig on the way to market; you need time to win the policy argument before you can win an election. Mrs Thatcher said the same: ‘First you win the argument, then you win the vote.’ But their hapless heirs didn’t win the argument on the great political challenge of our generation because they didn’t make one. For a Liberal to argue against global green piety is to blaspheme and risk the wrath of the ABC, so best be silent. And so the subversion of independent nations by the borderless ideology of global governance meets only timid resistance.
.
We know the global warming movement is politics all the way down. Maurice Strong, the political genius who fostered this campaign against industrialised nations from the first UN Earth Summit in 1972, said, ‘Isn’t the only hope for the planet that the industrialized civilisations collapse? Isn’t it our responsibility to bring that about?’ Strong channelled the ideology of the Club of Rome into the UN’s Agenda 21 and helped set up that great corrupter of climate science, the IPCC, as part of his stated goal to ‘control the agenda’. But Liberals shouldn’t trouble their heads with all that politics.
.
Decades after Maurice, there’s Boris and his fatuous apology for an economic revolution that lifted billions out of poverty. Says PM Johnson: ‘We were the beginners of this crime. The industrial revolution started in this country. We owe it to other countries to support their move to net zero.’ His contrition gained no graces from Saint Greta, who still damned the UK as a ‘climate villain’.
.
What a moribund spectacle: political leaders abasing themselves before psychologically troubled youth, flagellating their constituents for imaginary offences against Gaia and abandoning reason for a cult-like delusion.
.
That old word, ‘reason’, has nostalgic overtones of commitment to facts and truth. In the light of reason, we could bear glad tidings to Glasgow: that there is nothing in the climate record of the last two centuries that falls outside natural variation; that our Barrier Reef is in rude good health, cyclones are milder, polar bears are booming, the Antarctic is cooling, the globe is greening (that’s what CO2 does) and those Pacific islands are waving, not drowning. Every scare-mongering campaign has come to nought, this whole boondoggle is about global governance not global warming; it’s Abbott’s ‘socialism masquerading as environmentalism’.
But the grim globalists don’t want glad tidings; they want apocalyptic panic in the service of anti-democratic politics. They want independent nations to move into the global nursing home where they can be looked after. Australians all, let’s sign up to that, for we are old and frail. 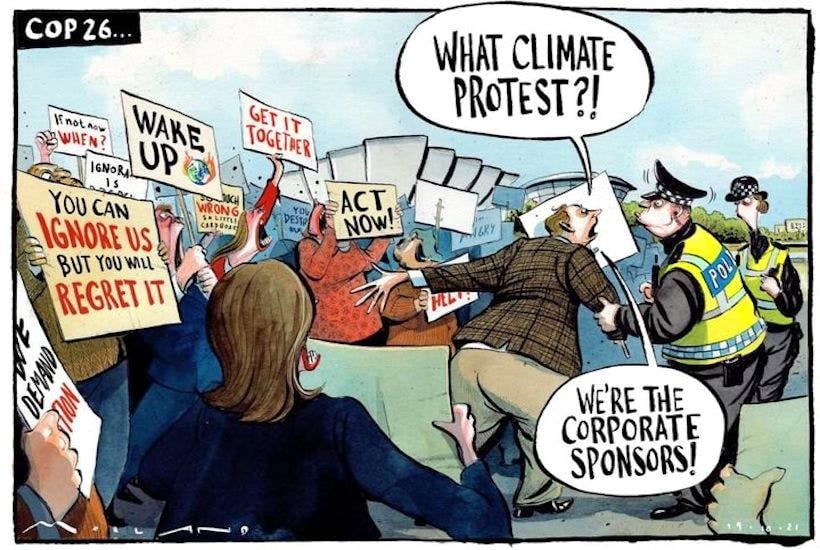 Charles Pier The Spectator Australia 28 October 2021
.
Last week, as our papers filled with greenwash and Scott Morrison worked on the betrayal of his “quiet Australians” ahead of COP26 in Glasgow, the Times came out with one of the best cartoons you’ll see all year (it’s the illustration to this story, just in case you haven’t guessed). To use Homer Simpson’s line, it’s funny ‘cos it’s true. Much of the best humour is based on exaggeration of what’s going on around us to expose it for the true nut-jobbery it is.
.
All around the world, companies are embracing virtue signalling and there’s nothing different about corporate Australia.
.
It’s becoming incredibly “inner-city” in its approach to the world, embracing the values of mobile, economically secure, knowledge class professionals. The top end of town has decided politics is a vital part of business — in an entirely different way to its traditional practice of defending its interests as a creator of wealth and jobs.
.
This is politics politics where there are far different faultlines to the old divisions of labour and capital.
.
By embracing the politics of the inner-city, corporates are spurning the rest of us.
That’s not only a turn off for people in the regions, the burbs and city fringes. It exacerbates divides as advocates of inner-city values are notoriously exclusionary, regarding those who don’t share their views as, well, deplorables.
The woke corporates pushing for grand climate commitments at Glasgow, net-zero emissions and so forth are happy to talk about “social licenses” to operate while moving way ahead of their customers and other stakeholders on a whole string of issues, even cutting across these people’s interests.
.
Their “social license”, put simply, violates the social contract. It not only divides society but segregates it into worthy and less worthy groups, the inner-city elect and the rest of us.
.
We need to follow Times cartoonist (and frequent Spectator cover artist) Morten Morgan’s lead and laugh their posturing out of existence while we still can.