Our rulers don’t like to let a crisis go to waste, as Obamunist Rahm Emanuel noted, because a crisis is “an opportunity to do things … you could not do before.” That’s why leftists are extending the crisis for as long as possible.

Australia would not be investing in Covid concentration camps if they were willing to let this go any time soon.

Speaking of Australia, Chief Health Officer Kerry Chant is the Tony Fauci of New South Wales. She has forbidden Australians from speaking to each other and does not intend for their lives ever to go back to normal. Now she proclaims that her subjects may be forced to wear obedience muzzles in the name of Covid for years:

In the absence of sufficient pushback, there is no reason for our rulers not to keep this up indefinitely — or at least until the ChiComs leak the next engineered virus.

So, the Great New Normal Purge has begun … right on cue, right by the numbers.

As we “paranoid conspiracy theorists” have been warning would happen for the past 18 months, people who refuse to convert to the new official ideology are now being segregated, stripped of their jobs, banned from attending schools, denied medical treatment, and otherwise persecuted.

Relentless official propaganda demonizing “the Unvaccinated” is being pumped out by the corporate and state media, government leaders, health officials, and shrieking fanatics on social media. “The Unvaccinated” are the new official “Untermenschen,” an underclass of subhuman “others” the New Normal masses are being conditioned to hate.

You can see the hatred in the New Normals’ eyes … 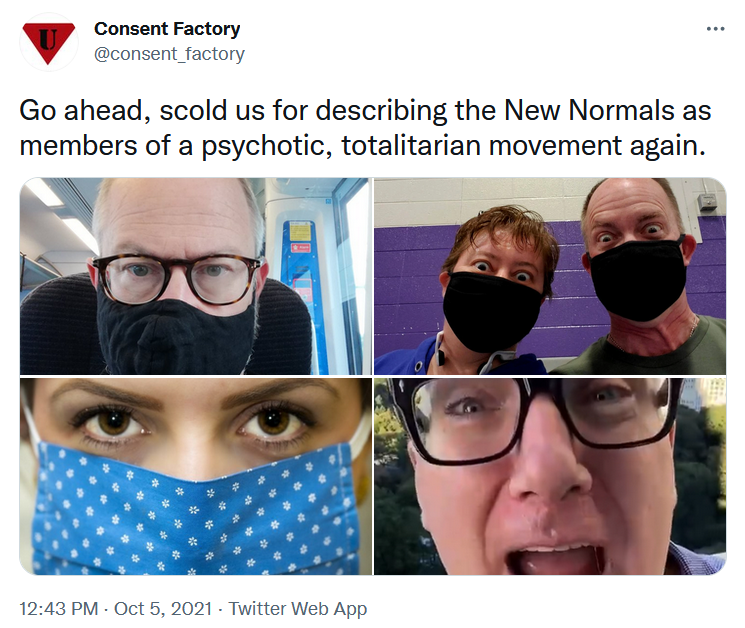 But it isn’t just a purge of “the Unvaccinated.” Anyone deviating from the official ideology is being systematically demonized and persecuted. In Germany, Australia, and other New Normal countries, protesting the New Normal is officially outlawed. The New Normal Gestapo is going around to people’s homes to interrogate them about their anti-New Normal Facebook posts. Corporations are openly censoring content that contradicts the official narrative. New Normal goon squads roam the streets, checking people’s “vaccination” papers.

And so on … a new official “reality” is being manufactured, right before our eyes. Anything and anyone that doesn’t conform to it is being purged, unpersoned, memory-holed, erased.

None of which should come as a surprise.

Every nascent totalitarian system, at some stage of its takeover of society, launches a purge of political opponents, ideological dissidents, and other “anti-social deviants.” Such purges can be brief or open-ended, and they can take any number of outward forms, depending on the type of totalitarian system, but you cannot have totalitarianism without them.

The essence of totalitarianism — regardless of which costumes and ideology it wears — is a desire to completely control society, every aspect of society, every individual behavior and thought. Every totalitarian system, whether an entire nation, a tiny cult, or any other form of social body, evolves toward this unachievable goal … the total ideological transformation and control of every single element of society (or whatever type of social body it comprises). This fanatical pursuit of total control, absolute ideological uniformity, and the elimination of all dissent, is what makes totalitarianism totalitarianism.

Thus, each new totalitarian system, at some point in its evolution, needs to launch a purge of those who refuse to conform to its official ideology. It needs to do this for two basic reasons: (1) to segregate or otherwise eliminate actual political opponents and dissidents who pose a threat to the new regime; and (2) and more importantly, to establish the ideological territory within which the masses must now confine themselves in order to avoid being segregated, or eliminated.

The purge must be conducted openly, brutally, so that the masses understand that the rules of society have changed, forever, that their former rights and freedoms are gone, and that from now on any type of resistance or deviation from official ideology will not be tolerated, and will be ruthlessly punished.

The purge is usually launched during a “state of emergency,” under imminent threat from some official “enemy” (e.g., “communist infiltrators,” “counter-revolutionaries,” or … you know, a “devastating pandemic”), such that the normal rules of society can be indefinitely suspended “for the sake of survival.” The more terrified the masses can be made, the more willing they will be to surrender their freedom and follow orders, no matter how insane.

The masses’ fear is then channeled into hatred … hatred of the official “Untermenschen,” whom the system encourages the masses to scapegoat. Thus, the purge is also a means of allowing the masses to purge themselves of their fear, to transform it into self-righteous hatred and unleash it on the “Untermenschen” instead of the totalitarian system, which, obviously, would be suicidal.

Every totalitarian system — both the individuals running it and the system, structurally — instinctively understands how all this works. New Normal totalitarianism is no exception.

Just reflect on what has happened over the last 18 months.

Day after day, month after month, the masses have been subjected to the most destructive psychological-terror campaign in the history of psychological terror. Sadly, many of them have been reduced to paranoid, anus-puckering invalids, afraid of the outdoors, of human contact, afraid of their own children, afraid of the air, morbidly obsessed with disease and death … and consumed with hatred of “the Unvaccinated.”

Their hatred, of course, is utterly irrational, the product of fear and propaganda, as hatred of “the Untermenschen” always is. It has absolutely nothing to do with a virus, which even the New Normal authorities admit. “The Unvaccinated” are no more of a threat to anyone than any other human being … except insofar as they threaten the New Normals’ belief in their delusional ideology.

I don’t know about you, but, so far, it has certainly made quite an impression on me. So much so that I have mostly set aside my satirical schtick to try to understand it … what it actually is, why it is happening, why it is happening now, where it is going, and how to oppose it, or at least disrupt it.

The way I see it, the next six months will determine how successful the initial stages of the roll-out of this new totalitarianism will be. By April of 2022, either we’ll all be showing our “papers” to the New Normal Gestapo to be able to earn a living, attend a school, dine at a restaurant, travel, and otherwise live our lives, or we will have thrown a monkey wrench into the machinery. I do not expect GloboCap to abandon the roll-out of the New Normal over the longer term — they are clearly committed to implementing it — but we have the power to ruin their opening act (which they’ve been planning and rehearsing for quite some time).

So, let’s go ahead and do that, shall we? Before we get purged, or unpersoned, or whatever. I’m not sure, as I haven’t seen a “fact-check” yet, but I believe there are some commercial airline pilots in the USA who are showing us the way.

DISCLAIMER: The preceding essay is entirely the work of our in-house satirist and self-appointed political pundit, CJ Hopkins, and does not necessarily reflect the views and opinions of the Consent Factory, Inc., its staff, or any of its agents, subsidiaries, or assigns. If, for whatever inexplicable reason, you appreciate Mr. Hopkins’ work and would like to support it, please go to his Substack page, or his Patreon page, or send your contribution to his PayPal account, so that maybe he’ll stop coming around our offices trying to hit our staff up for money. Alternatively, you could purchase his satirical dystopian sci-fi novel, Zone 23, or Volume I and II of his Consent Factory Essays, or any of his subversive stage plays, which won some awards in Great Britain and Australia. If you do not appreciate Mr. Hopkins’ work and would like to write him an abusive email, feel free to contact him directly.