Shrillary and Dr. Fraudci Meet Up at Funeral – Look Like Long-Lost Lovers Reunited

Shrillary & Fraudci, two traitors who have done more to destroy America than any others living, other than Obama, met up yesterday at the funeral for vaccine-protected General Colin Powell.  They looked like long lost lovers.  Sick. 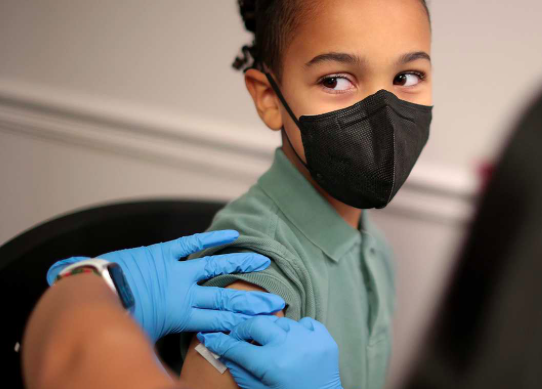 Children between the ages of 5 and 11 are eligible to receive $100 to get vaccinated against COVID-19 in New York City, Mayor Bill de Blasio announced Thursday.

The kids will need to have their parent or guardian’s consent to get vaccinated, and de Blasio cautioned that the shot can hurt a little.

Accuses Fauci of having “just changed the definition of gain of function, sort of like flushing it down the memory hole.”

Following another intense clash between Anthony Fauci and Rand Paul at a hearing Thursday, the Senator later declared that “no amount of smarmy word salad will get Fauci out of the fact that he lied before Congress.”

The people telling you to be deathly afraid couldn't themselves care less about it.
It was never about a virus.
Your never-ending fear is what gives them everlasting power. https://t.co/cZULaUR2k6

Appearing on Fox News after the Senate hearing, Paul noted that “The NIH has admitted” that gain of function research funded by their agency took place at the Wuhan labs, but that “Fauci won’t admit it because I think he then thinks he’ll have some kind of moral responsibility for the pandemic.”

Paul further reiterated that Fauci “changed the definition” of gain of function on the NIH website, a point that he confronted Fauci with at the earlier hearing, and which Fauci denied.

“It sounds like a lot of government doublespeak,” Paul said of the NIH’s word play, adding “He doesn’t get it, he hasn’t learned anything from this and he doesn’t want to take any responsibility. He’s been the number one advocate for gain of function research and now he acts as if ‘oh it doesn’t exist and we never did it,’ but they just changed the definition, sort of like flushing it down the memory hole.”

Paul further urged that Fauci is “trying to redefine” the definition of gain of function, noting “he’s using a sort of smarmy word salad to try to get around the fact that it happened.”

In a further op-ed published by Fox News, Paul urged that “Defining away gain-of-function research by saying it doesn’t exist unless you know in advance it will occur is the very essence of hubris.”

Elsewhere in the interview Paul addressed the news that the federal government is pressing ahead with a January deadline for vaccine mandates for businesses.

“I think they are unlawful and unconstitutional,” Paul said of the mandates, adding “We need to take them to court and people need to stand up and resist.”

“what a disservice to our first responders and doctors,” Paul continued, noting “they had to show up for work when there was no vaccine, a lot of them got COVID, survived and now have natural immunity, and Fauci and the rest say ‘sorry, you’re yesterday’s trash.”

This mandate is illegal, unconstitutional, and immoral. I applaud every worker who is standing up for the right to make his or her own medical decisions. https://t.co/VkrqZPbMyD