The Great Reset Is Real, and It Is Taking No Prisoners

“The naked individual against an all-powerful state is the dream of every tyrant and the nightmare of every freedom-loving citizen. That is why there is always the pressing need to have something that stands between the individual and the state.”

Klaus Schwab of the World Economic Forum have been happily using the Covid crisis to further push their nefarious agenda, and are also using ‘climate change’ as another ‘crisis’ to exploit and bring in their dystopian future. And it is all about increasing the power of the state while reducing the power of the individual.

I’ll begin by addressing the elephant in the room. Isn’t the Great Reset simply a “conspiracy theory” concocted and circulated by “rightwing extremists?” The so-called conspiracy theories run something like this: the Great Reset is a plot hatched by a technocratic global elite to establish a socialist-communist New World Order. The Great Reset will abolish the property rights of the majority, as well as individual and national sovereignty, and wipe out the last vestiges of personal freedom. It uses covid-19 and climate change as pretexts to enslave what will remain of humanity, using never-ending lockdowns, experimental vaccines, and pervasive and inescapable surveillance. 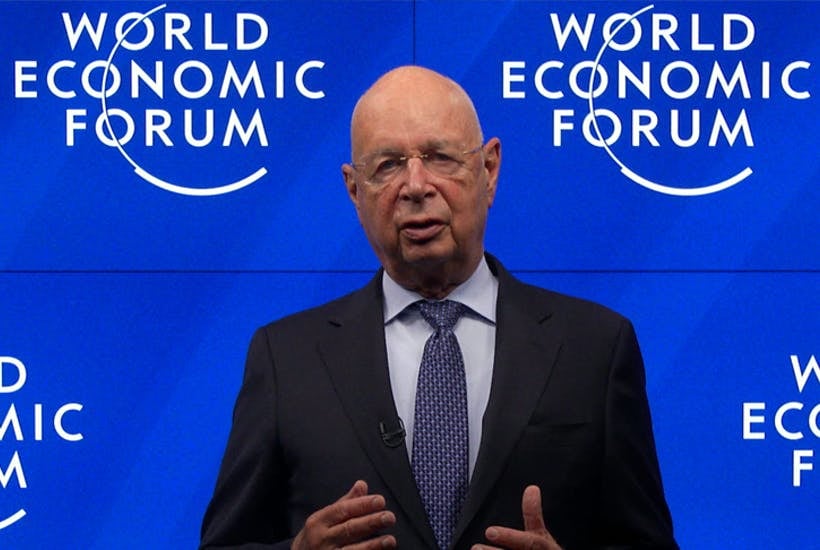 According to the New York Times[1] and the Anti-Defamation League,[2] the Great Reset has no basis in fact. Or, as the BBC claims,[3] the Great Reset is a benign effort on the part of “leading thinkers”[4] to bring about “a fairer, greener future,”[5] based on a reset of capitalism. Meanwhile, Time devoted an issue to the Great Reset, effectively hailing it as the solution to all our problems post-covid.[6]

Klaus Schwab, the Founder and Executive Chairman of the World Economic Forum (WEF), suggests that the Great Reset is merely an attempt to address the weaknesses of capitalism exposed by the covid crisis, as well as the looming catastrophes posed by unmitigated climate change and environmental degradation. This is what Klaus Schwab and Thierry Malleret suggest in their book, Covid-19: The Great Reset. It’s what numerous documents on the WEF website claim. Why, then, has the Great Reset been construed as a vast leftwing conspiracy to create a totalitarian one-world government?

I don’t mean to suggest that the truth lies somewhere between denial and conspiracy. Rather, I want to make clear just what the Great Reset entails, according to its architects and subscribers. I rely on the claims of Klaus Schwab and his WEF contributors, the WEF’s partnerships, developments in the U.S. and around the world, and on the implications that can be reasonably drawn from proposals and their implementation. In the process, I also mean to show how the Great Reset idea generates “conspiracy theories,” as if spontaneously.

Before grappling with the main components of the Great Reset, a history of the idea and its development is in order. Although its philosophical roots may go much deeper, the Great Reset can be traced to the inception of the World Economic Forum, founded as the European Management Forum in 1971. In the same year, Klaus Schwab, an engineer and economist by training, published his first book, Modern Enterprise Management in Mechanical Engineering, written in his native German.[7] Here, Schwab first introduced what he would later call “stakeholder capitalism,” arguing, as the WEF website notes, “that the management of a modern enterprise must serve not only shareholders but all stakeholders to achieve long-term growth and prosperity.”[8] Schwab and the WEF have promoted the multistakeholder concept ever since. The WEF is the source for the stakeholder and public-private partnership rhetoric and policies embraced by governments, corporations, non-governmental organizations (NGOs), civil society organizations, and international governance bodies worldwide. Public-private partnerships have played a key role in the response to the covid crisis and are instrumental in the response to the supposed climate change crisis.

The exact phrase, “the Great Reset,” came into circulation in 2010 with the publication of the book, The Great Reset, by the American Urban Studies theorist Richard Florida[9]—although others claim that they used the phrase before him. Florida’s Great Reset was a response to the 2008 financial crisis and argues that the 2008 crash was the latest in a series of Great Resets, including the Long Depression of the 1870s and the Great Depression of the 1930s. Far from being the fallow years typically depicted, Great Resets are periods of paradigm-shifting innovation and geographical reconfiguration. Schwab apparently appropriated the phrase and adapted it to represent his stakeholder vision for a new kind of capitalism and world system.

At the WEF annual meeting in 2014, Schwab declared: “What we want to do in Davos this year …  is to push the reset button.”[10] By this he referred to an imaginary reset button on the world economic system of “neoliberal” capitalism. A graphic depiction of a reset button would later appear on the WEF’s website. In 2017, the WEF published a paper entitled, “We need to reset the global operating system to achieve the SDGs [Sustainable Development Goals]” of the United Nations (UN).[11]

Next, the WEF organized two events that eerily anticipated covid-19, which became the primary inspiration for the Great Reset project. In May 2018, the WEF collaborated with the Johns Hopkins Center for Health Security to conduct the CLADE X Exercise, a “tabletop” simulation of a national response to a pandemic.[12] The exercise simulated the outbreak of CLADE X, a novel strain of a human parainfluenza virus with genetic elements of the Nipah virus. According to Homeland Preparedness News, the CLADE X simulation demonstrated that “[t]he lack of both a protective vaccine and a proactive worldwide plan for tackling the spread of a catastrophic global pandemic resulted in the death of 150 million people across the Earth.”[13]Clearly, preparation for a global pandemic was in order.

A little over a year later, in October 2019, the WEF’s uncanny prescience was again on display, only this time with greater precision. Along with the Bill and Melinda Gates Foundation, the WEF teamed up with Johns Hopkins University to stage another pandemic exercise, called Event 201. Event 201 simulated the international response to the outbreak of a novel coronavirus—two months before the covid-19 outbreak became international news and five months before the World Health Organization (WHO) declared it a pandemic. The Johns Hopkins Center for Health Security’s summary of the exercise closely resembles the actual covid-19 scenario, including apparent foreknowledge of so-called asymptomatic spread:

Event 201 simulates an outbreak of a novel zoonotic coronavirus transmitted from bats to pigs to people that eventually becomes efficiently transmissible from person to person, leading to a severe pandemic. The pathogen and the disease it causes are modeled largely on SARS, but it is more transmissible in the community setting by people with mild symptoms.[14]

The CLADE X and Event 201 simulations anticipated practically every eventuality of the covid crisis, notably the responses by governments, health agencies, conventional media, social media, and elements of the public. The responses and their effects included worldwide lockdowns, the collapse of businesses and industries, the adoption of biometric surveillance technologies, an emphasis on social media censorship to combat “misinformation” and “disinformation,” the flooding of social and legacy media with “authoritative sources,” widespread riots, and mass unemployment.[15]

These premonitory exercises and other covid curiosities have contributed to the “plandemic” narrative—speculation that the covid-19 crisis may have been staged by global elites centered around the WEF as an alibi for initiating the Great Reset. In addition to the pandemic exercise just referenced, Swiss Policy Research points to the WEF’s role in promoting digital biometric identity systems, thrusting its Young Global Leaders into major roles in the management of the covid crisis, and advocating the vaccination of children as “an entry point for digital identification.”[16]

On June 13, 2019, the WEF signed a Memorandum of Understanding with the UN to form a partnership centered on advancing the UN “2030 Agenda for Sustainable Development.”[17] The WEF published the “United Nations-World Economic Forum Strategic Partnership Framework for the 2030 Agenda” shortly thereafter.[18]  The WEF promised to help “finance” the UN’s climate change agenda. The framework also commits the WEF to helping the UN “meet the needs of the Fourth Industrial Revolution,” including providing assets and expertise for “digital governance.” Agenda 2030 appears to have been tailor-made to accommodate the UN-WEF partnership. It adopts the stakeholder concept introduced by Schwab decades before. The word “stakeholders” is used no less than thirteen times in the 2030 resolution. The Great Reset, then, may be understood, in part, as the WEF’s contribution to Agenda 2030.

In June 2020, the WEF held its Great Reset summit as the fiftieth annual meeting of the World Economic Forum—delayed and refocused due to the covid crisis—and announced the Great Reset’s official launch.

Just months into the covid crisis, on July 19, 2020, and a mere month after the annual meeting, Klaus Schwab and Thierry Malleret published Covid 19: the Great Reset. Steve Umbrello, the Managing Director at the Institute for Ethics and Emerging Technologies at the University of Turin, wrote in his academic review of the manifesto:

Although not impossible, the speed at which a book on this particular topic, proposing these theses, was produced[,] does play into the conspiratorial aesthetic that the book has since induced. Even though the authors are transparent about writing and publishing the book within a month’s time, this neither confirms the veracity of such claims nor dispels suspicion from those who question its expediency.[19]

The short interval between the WHO’s declaration of a pandemic and the book’s publication is not the only factor that has fed “the conspiratorial aesthetic” surrounding the Great Reset. Schwab’s writing with Malleret and other WEF statements have stoked the speculations. The co-authors declare, without apparent regret or shame, that covid-19 represents an “opportunity [that] can be seized,”[20] and “we should take advantage of this unprecedented opportunity to reimagine our world,”[21]