Nothing to do with climate. Nothing at all. It’s all about our money. 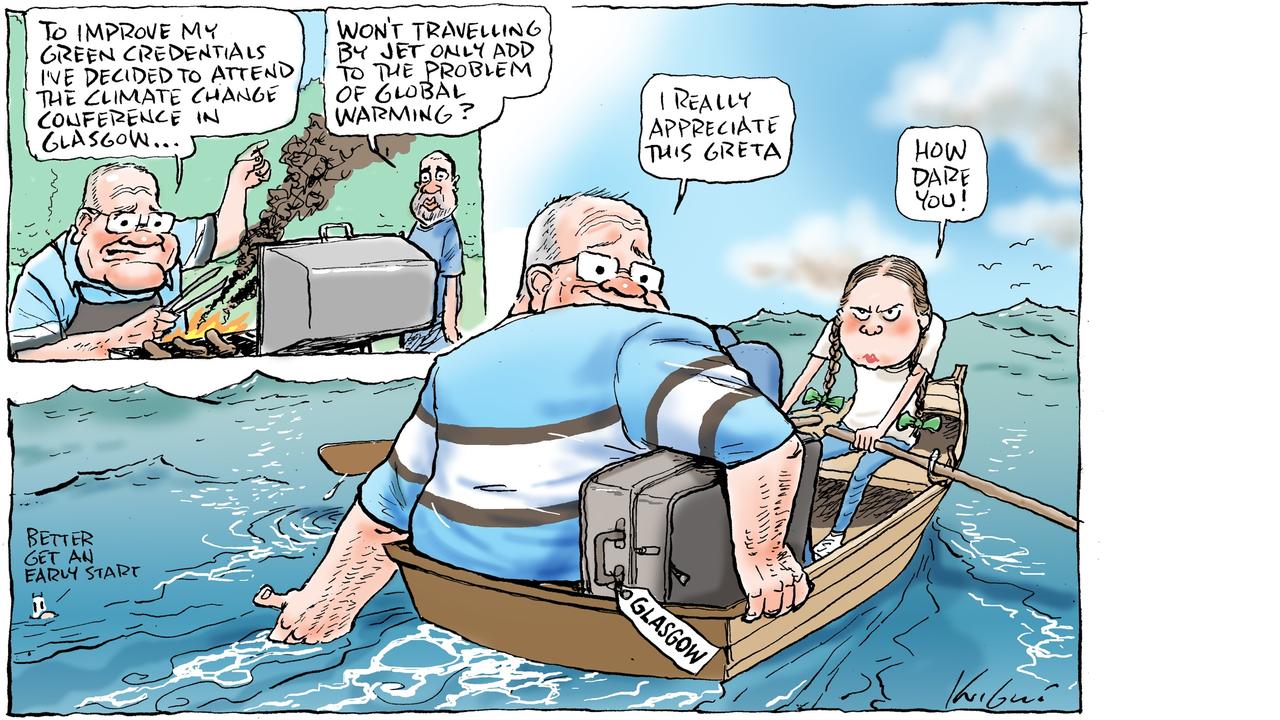 Andrew Bolt Herald Sun November 14, 2021
.
The Morrison government’s climate modelling, released on Friday, reveals the truth at last: Global warming activists are more dangerous than global warming. Forget cyclones, droughts, famine, fires, dying reefs and rising seas. None of that will hurt us more than the giant international financial institutions, which worked out there’s a fortune to be made by going woke and scamming governments in this gigantic fake scare.
.
They’re now issuing us demands: Hand over green subsidies, handouts and tax breaks or else they’ll blow out our brains.
.
You thought global warming was about the “science”? Wake up: It’s actually about the money.
.
It’s the biggest business in town, which is why – flap, flap, flap – every business vulture has flown in to feed on it, from the Business Council of Australia and Commonwealth Bank to billionaire Andrew Forrest, now spruiking his unproven “green hydrogen” as the fuel of the future.
.
But worst are the international financiers, and their greenmail is revealed in disgusting detail in this 99-page modelling that the Prime Minister says he relied on to change his mind and promise to cut Australia’s emissions to net zero by 2050, and spend $21 billion in the next decade trying.
.
Actually, “modelling” is the wrong word. The report is just a blackmailer’s list of demands.
For a start, it’s all about cash, not the climate. Nowhere in those 99 pages of Morrison’s modelling is there a word about droughts, fires, cyclones or dying reefs, or how global warming itself will supposedly hurt us by 2050.
Nor is there any attempt to show what difference we’ll make to the climate if we cut our emissions even harder.
.
In short: Nowhere in this document are we told the price of global warming – and how much we’ll save ourselves through averted climate catastrophes if we try harder to “stop” it.
.
The reason is simple: Because that would expose an inconvenient truth. Global warming is not a big threat.
.
I know, hysterics at the Glasgow climate summit wail that humans face “extinction” (says the United Nations) and “our children will be waging wars over water and food” (says the European Union).
.
They lie. We’re instead getting fewer cyclones and bigger crops, and now have near-record coral cover on the Great Barrier Reef. Land burned by fire is falling, and deaths by climate disasters have never been so low.
It turns out that a warming world may help us. In any case, nothing Australia does will stop it, so you can understand why the government did not want the report’s authors, McKinsey and Company, to check the science and admit the global warming scare is based on lies.
.
So what does this modelling measure instead?
The truth is astonishing: It calculates how much woke financiers will smash Australia if we don’t give in to their global warming blackmail.
.
Read it yourself: It frankly warns that if “Australia does not adopt a 2050 target”, international financiers will attack us “in the form of a risk premium imposed on Australia’s cost of capital”, raising interests rates on loans and credit cards by up to 1.5 per cent.
.
We could also be hit with “trade action against Australian exports” by other countries that have gone net zero, as well as “lower demand for specific Australian products” from woke consumers angry with our “perceived lack of action on climate”.
.
These activist financiers, consumers and foreign governments could between them allegedly “reduce investment in Australia by an average of 5.5 per cent over the period to 2050”, cutting our national income then by 0.5 per cent.
The modelling claims this will cost every single Australian in 2050 about $600 in lost economic activity – or a total $21 billion a year of losses in 2050, assuming our population then is 35 million.
.
What a shakedown. What blackmail, because check what we must do to avoid this attack by warming activists and carpetbaggers on our standard of living.
The government’s modelling suggests Australia switch to electric cars (pleasing car makers), to green hydrogen (pleasing energy billionaires) and to trading in carbon offsets (pleasing banks and other financial institutions).
.
This is what the great global warming scare has come to.
.
It’s Big Money blackmailing governments to make us buy whatever they’re selling, through subsidises, tax concessions, rebates and mandates, while spreading insane hysteria about what will happen to the planet if we don’t.
.
“Extinction!” “Your children will die!”
.
The great scare has become the great heist, and the Morrison government’s “modelling” is just the ransom note.
.
In other news:

2 thoughts on “Global warming is the biggest business in town”