Bill Gates is trending. Is there a new virus?

Fraudci is more flexible than a tennis shoe:

Fauci: I Don’t Want to Take Sides on NYC Exempting Athletes and Entertainers from Vax Mandate, ‘I’m Not There on the Ground’

On Friday’s broadcast of the Fox News Channel’s “Your World,” White House Chief Medical Adviser Dr. Anthony Fauci said that he doesn’t want to criticize New York City Mayor Eric Adams’ (D) decision to exempt professional athletes and entertainers from the city’s vaccine mandate while still imposing the mandate on city workers because “I’m not there on the ground in New York. I don’t have a good feel for what the situation is. So, it really is a tough problem.”

RIP. He was fully VXD. It was required by Dave Grohl.

Will we ever know what the cause of Taylor Hawkins death was? 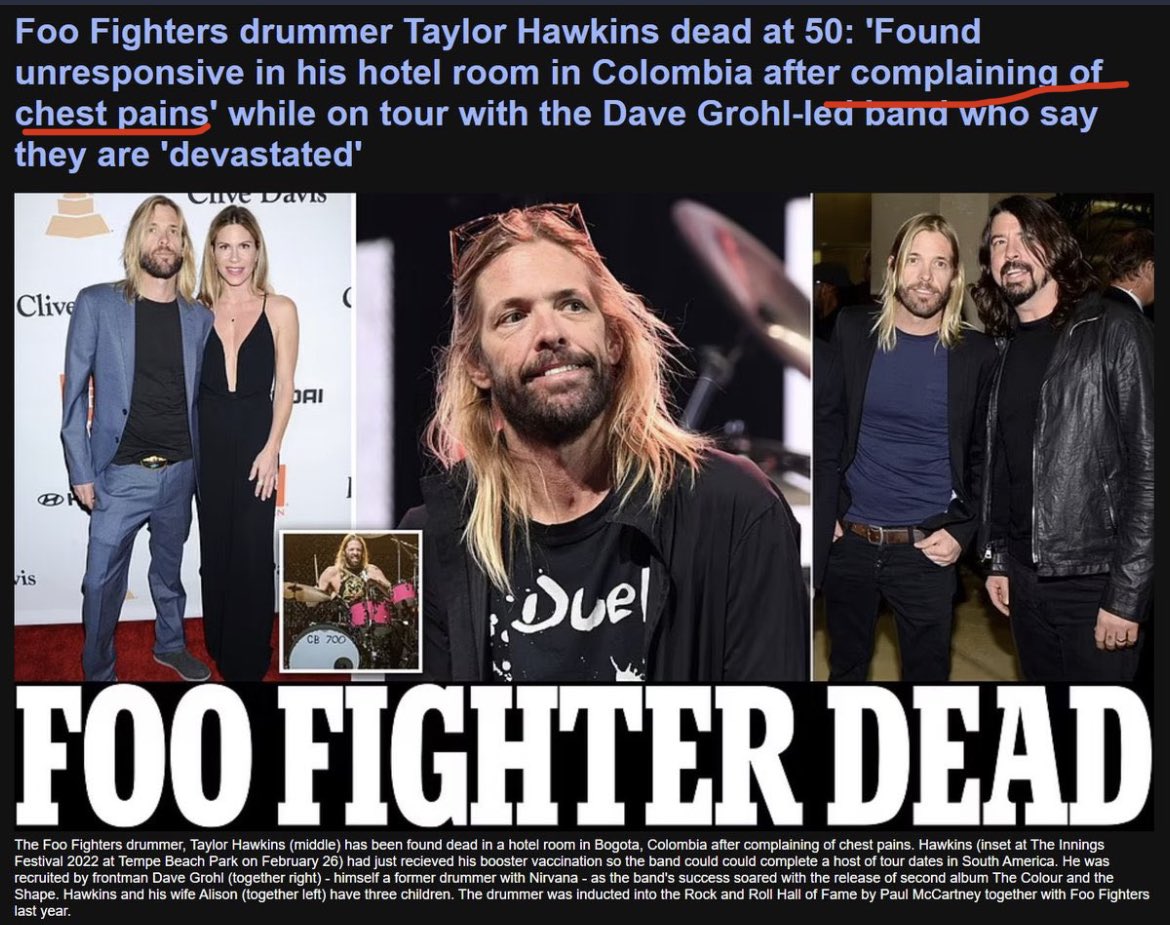 How many jabs before immune system is completely destroyed?

Why are so many doctors and hospital staff scared of saying what’s really going on?

The city of Louisville’s Covid vaccine coordinator – and a vocal proponent of mRNA shots – “died unexpectedly” last week. She was 36. The city doesn’t seem to think it needs to say more. It’s wrong.

For over a year, Dr. SarahBeth Hartlage urged people to take Covid vaccines.

She urged them online, in person, and in briefings with Louisville’s mayor. She tweeted a picture of herself opening a box of mRNA jabs and said she’d had “a little visit from the Pfizer fairy.” She was thrilled when regulators authorized shots for five-year-olds and disappointed when Pfizer postponed its application for six-month-olds.

She didn’t just talk or tweet, either. She ran the city of Louisville’s vaccine clinic, which injected people with almost 120,000 shots.

And she wanted vaccine mandates.

She was attending a medical conference in Florida. Her death was “sudden and unexpected,” according to Louisville’s chief health strategist. Dr. Hartlage was 36.

Beyond that, no details are available.

Sudden deaths in adults under 40 are frequently overdoses or suicides, of course. But Dr. Hartlage’s Twitter feed makes her appear to be as unlikely a candidate for either as anyone alive. In one of her final tweets, she proudly talked of helping a passenger who was having an emergency on a flight she was taking.

So how did Dr. Hartlage die? Was her death a cardiac event?

I understand this question is awful for her husband and the people who knew and loved her.

But she forfeited her right to privacy when she cajoled other people to take Covid shots that are known to have cardiac dangers to young people – and even encouraged mandatory vaccinations. “Sudden and unexpected” will not do. (If I “died after a brief illness,” you can bet the bluechecks on Twitter would insist on knowing whether Covid had killed me; and they’d be right to ask.)

The city of Louisville needs to be honest about what happened, the sooner the better.