Boys have a penis. Girls have a vagina. 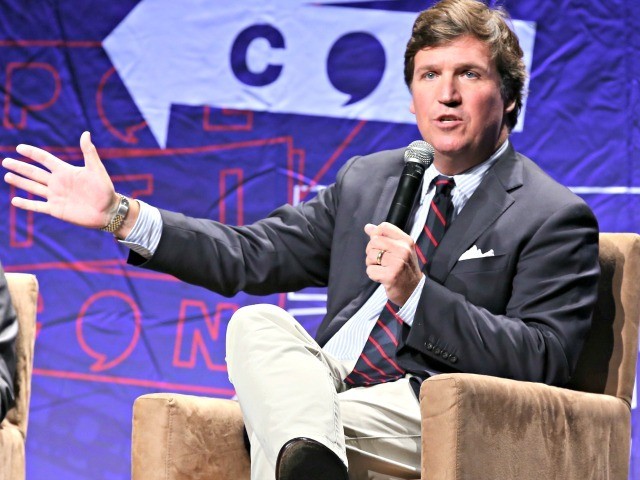 Fox News’ Tucker Carlson, the most popular cable news host on television, is the latest victim of Twitter censorship as the platform cracks down on anyone who even jokes about the fact that Biden administration Health & Human Services Assistant Secretary Rachel Levine is a biological man.

The censorship of Tucker follows the censorship of the official account of conservative satirical website The Babylon Bee, the editor-in-chief of the same website, and Turning Point USA founder Charlie Kirk, both because of tweets referring to Levine by his biological gender. 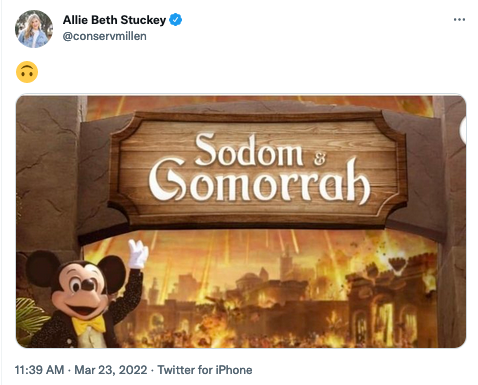 If you don’t know what this is referring to, make sure to listen to yesterday’s ep (#586) of ‘Relatable’ or watch this episode on the ‘Allie Beth Stuckey’ YouTube page or on BlazeTV!

Disney has gone the way of Sodom & Gomorrah: 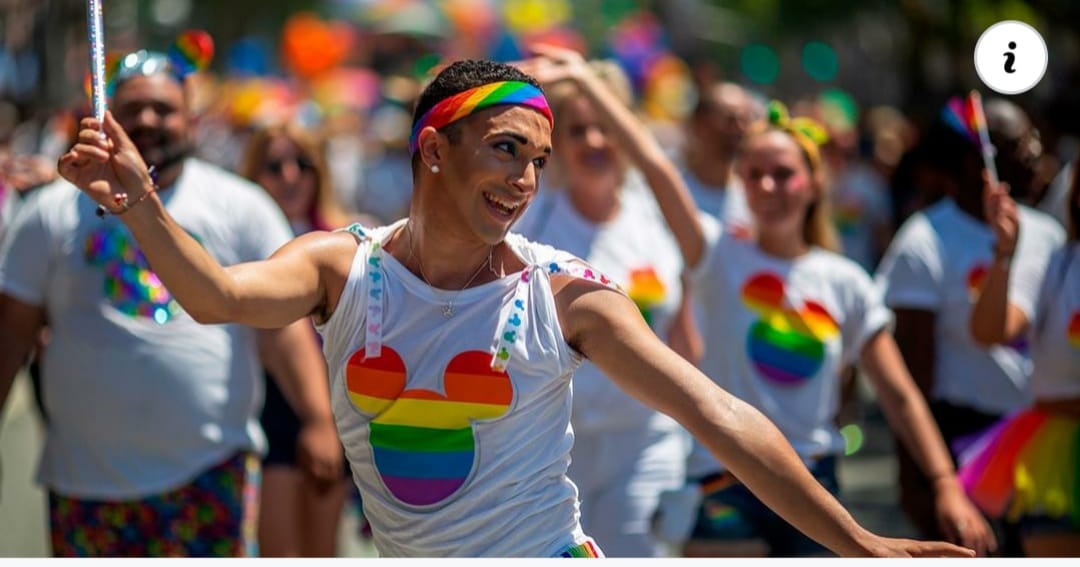 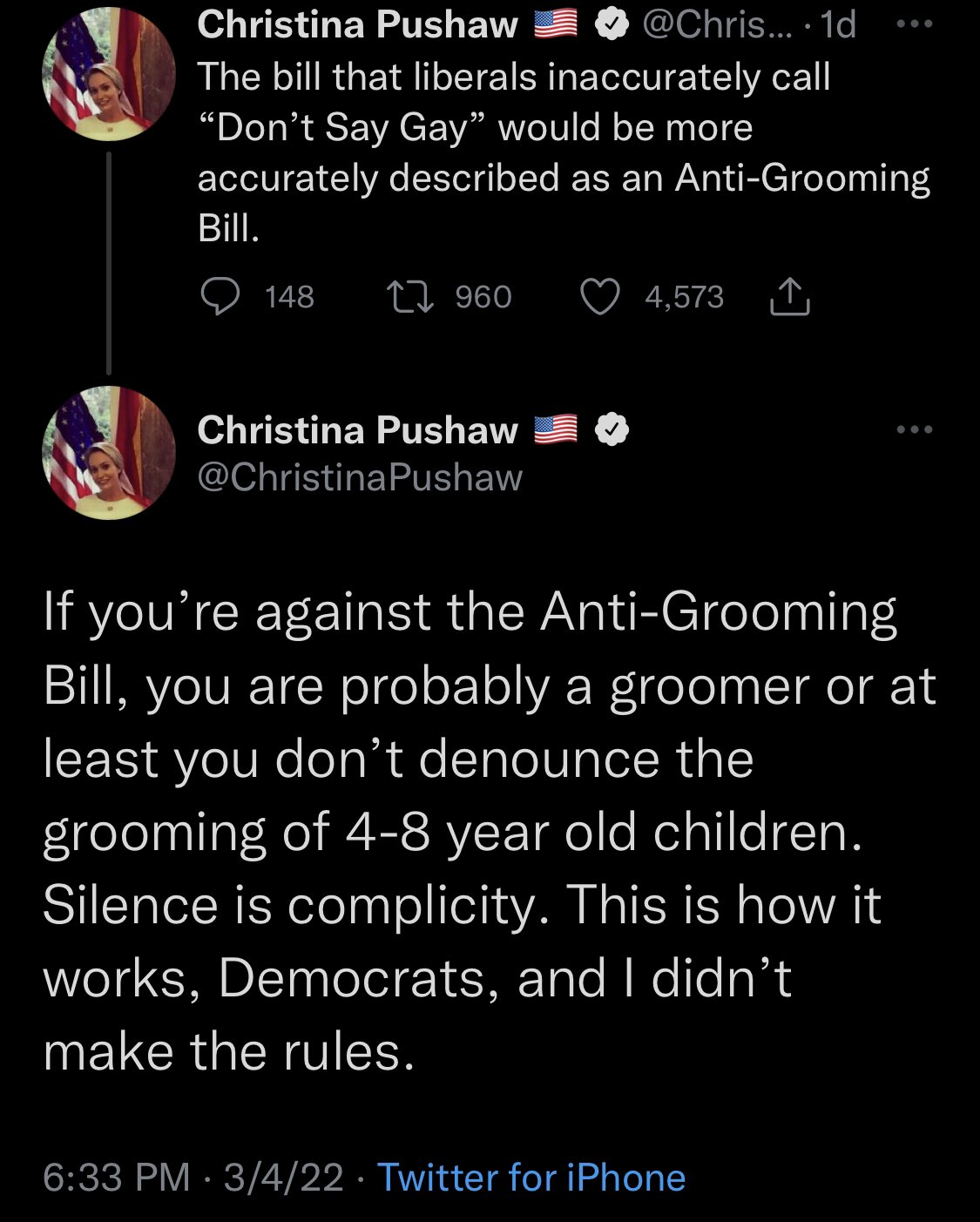 Is she over the target?

If you aren’t for the anti-grooming bill you just might be a pedophile:

Who needs discussions about sex with seven-year-olds?

To anyone focused on real-world events and relationships, America is obviously the most tolerant and inclusive society that has ever existed. If you are looking for irrefutable evidence, watch an hour of TV commercials created by major U.S. companies. Racially integrated couples, gay couples and families, multi-racial professionals and creators are featured on virtually every one. This would hardly be the case if anti-Black and anti-gay sentiments were perceived by corporate advertisers to pose a significant threat to their sales. The same is true of television programming generally, where series featuring little people, obese people, and every mix of gay couples, non-white and non-straight TV hosts and commentators, are ubiquitous all day long. Yet the political left and the Democratic Party still refuse to take yes for an answer and prefer instead to focus on fringe and marginalized bigots who come in all colors, genders and sexual orientations, and will be with us to the end of time.

In fact, through a perverse but also inevitable twist to Identity Politics, the most aggressively bigoted and hate-filled censors seeking to suppress and marginalize individuals whom they regard as “other” are the very movements organized as advocates for “victim” minorities. The haters include white supremacist fringe movements who think that through attacks on Jews and Blacks they are actually defending whites (who are indeed targeted by so-called social justice warriors. But the most prominent and far more numerous hate groups are the social justice warriors themselves – Black Lives Matter, the misnamed Human Rights Campaign and the equally misnamed Gay and Lesbian Alliance Against Defamation, an organization that is well-practiced in the art of defamation against what it refers to as “oppressor” groups.

Vice President Mike Pence and Trump’s gay Ambassador to Germany, Richard Grenell, are leading a Trump-inspired global campaign to end the criminalization of gay sex and gay relationships, but you would never know it from the hate that gay “civil rights” groups are directing at them. Pence has been singled out by leading Democratic presidential candidate, Pete Buttigieg as a dangerous bigot – not because he actually is a bigot but because he holds traditional Christian views of gay marriage, which offend Buttigieg and the gay vigilantes. When Buttigieg announced he was gay and introduced his husband in 2015, Pence went out of his way as the governor of Indiana – as Buttigieg’s political rival – to praise him for his public service as mayor of South Bend.

Being able to hold opinions that others find offensive is called freedom of conscience or religious liberty, and is the most basic freedom we have as Americans, which is why it is stipulated in the First Amendment to the Bill of Rights. It is the most basic freedom because without the ability to hold dissenting opinions and express them freely you can’t defend any of the other freedoms you have. The sin committed by Vice President Pence that gave Buttigieg the license to demonize and defame him was his signing of a bill to protect the religious liberty of the people of Indiana. The presumption behind Buttigieg’s slander of Pence was his membership in a group purportedly “marginalized” and therefore “oppressed.” In fact, in the present political climate, even in Indiana, Buttigieg’s homosexuality is an obvious asset – one so powerful as to catapult an obscure mayor of a crime-ridden small town to third or fourth place in the race to become the Democrats’ presidential candidate for 2020.

Buttigieg’s assault on Pence and religious liberty was supported by the LGTBQ left represented by organizations like the Human Rights Campaign and GLAAD. Deploying victim politics to suppress opponents of leftist ideas has been the pattern of leftist attacks on Christians since gays won their rights through a series of questionable Supreme Court decisions culminating in the legalization of gay marriage in 2015.

Most notorious among the vigilante assaults was the attempt by a gay Colorado couple, to drive a Christian baker named Jack Phillips out of business because he could not in good conscience bake them a wedding cake endorsing gay marriage. There was nothing in Phillips’ attitude or behavior that a reasonable person would describe as bigoted. He was gracious to these gay customers and offered to sell them any cake in the shop they desired. What he would not do was endorse a sacrament that violated his religious principles.

His gay assailants reciprocated by cursing him and smashing his wares as they exited his shop. They then mobilized the LGBTQ legal agencies to file suit and force him to defend himself in lengthy and expensive court battles. During these trials, he was forced to give up making wedding cakes, which constituted 40% of his business.  Not satisfied with attacking his business, the LGBTQ vigilantes also incited a hate campaign against him personally. In one incident a member of their lynch mob called to inform Phillips he was coming to kill him. Phillips had to hide his granddaughters who were visiting him in the pantry until the police came. Eventually, Phillips won his Supreme Court case but this didn’t end the campaign against him. His gay antagonists came back with a request that he make them cakes dedicated to Satan and featuring other statements of belief they knew he could not accommodate.

Nor was Phillips alone as a target of gay-lesbian hate groups. In Lexington Kentucky, the Gay and Lesbian Services Organization (GLSO) asked a Christian T-shirt maker named Blaine Adamson to make them a T-shirt promoting a Gay Pride Festival. Adamson turned them down. He had done the same with many other T-shirt requests for slogans and causes he could not in good conscience produce. At the same time, he offered to connect them to a T-shirt maker who could and would fulfill their request. In other words, Adamson was a tolerant believer in live-and-let-live American pluralism.

But his GLSO antagonists were not. They filed a lawsuit against him and began a public boycott campaign to defame him and drive him out of business. Large enterprises withdrew their patronage and the Mayor of Lexington denounced him. Adamson has prevailed in two court decisions but this has not caused his persecutors to relent. His case is now before the Kentucky Supreme Court, eight years after it began.

There are numerous cases like this all driven by the same agendas. Claiming the authority to pursue these vendettas through their status as a “marginalized” and “underserved” group – both demonstrable falsehoods – LGBTQ activists have conducted nationwide campaigns to force religious Christians to give up their freedom of conscience and submit to the kind of tyranny and religious persecution that caused America’s Founders to flee Europe and create the rights that have protected us ever since.

The assaults on these rights – vigorously encouraged and often led by the Obama Administration – have become so serious and so widespread that the Trump administration has countered with an “Extended Religious Conscience Rule” promulgated by the U.S. Health Agency. As summarized by Kaiser Health News, “The HHS rule is designed to protect the religious rights of health care providers and religious institutions by allowing them to opt out of procedures such as abortions, sterilizations and assisted suicide.”

In other words, if you are a religious Christian and believe in the sanctity of human life you cannot be forced to perform an abortion or assist in a suicide. In normal times, this might seem like a reasonable defense of religious liberty and individual conscience, without causing threats to third party patients since obviously there are plenty of health care providers who would be willing to perform the procedures.

But these are not normal times, and this is now the defining issue in the war between the left and Christian America.  A headline on the leftwing Internet site, Salon.com, describes the conflict in these distorted and inflammatory terms: “Progressives fight back on the Christian right’s grotesque ‘religious freedom’ power play.” Salon describes the new HHS rule as “a sweeping assault on civil rights” and an effort to advance the religious right’s “discriminatory agenda.” The legal director for “Americans United for Separation of Church and State has joined offered the following phony distinction to defend these assaults on the First Amendment: “Religious freedom is incredibly important. It’s right to believe and worship as you see fit. But it’s never an excuse to discriminate.” In other words, you can have opinions and beliefs but keep them to yourself.

This is perfectly Orwellian. Under these guidelines, it’s discrimination to choose not to perform a procedure that would violate your most cherished principles and beliefs – but it’s okay to force people to do just that. By this logic it’s bigotry to hold a belief – for example against gay marriage – even if your real world behavior towards gay married couples like Pete Buttigieg and his husband is generous and tolerant. At the same time, it’s not bigotry to force people to perform acts that they consider hateful. Or to stop them from expressing themselves publicly. A senior living home in Oregon has actually banned its seniors from playing Christian music. The case is in the courts.

This is the divide in our nation today. The left has disconnected itself from the American tradition of individual freedom, which originated as an idea of the Protestant Reformation and became a fundamental part of our founding documents as the First Amendment. The First Amendment not only grants its beneficiaries freedom of conscience but the freedom to speak and advocate their conscience. Leftist opponents of these freedoms have redefined religious liberty so that it’s not liberty at all.

To totalitarian leftists, religious liberty is the freedom to worship according to the values you believe in, but not to advocate or live by those values; they have redefined tolerance as a mandate to force people to act against their beliefs if those beliefs are at odds with the prejudices of the left. These are anti-American ideas and they constitute a determined attack on America’s pluralistic culture – a culture and respect they hypocritically demand for themselves but refuse to afford to others. These attacks have already corroded our national dialogue and created divisions so deep it is problematic as to whether in the long run, our nation can survive them.