Is the House of Mouse an El Dorado for Pedo’s?

Disney’s reaction to Ron DeSantis is proving him right–woke lunatics want to queer & groom your kids. 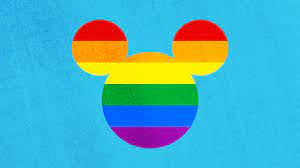 DISNEY GOES WOKE, WILL NO LONGER SAY ‘BOYS AND GIRLS’ WITHIN PARK

The most magical place on earth is now also the most bizarre. Disneyland and Disney World are removing “gender greetings” from its parks, meaning, those inside the budget-bursting theme parks will no longer be addressed or greeted by the phrases “boys and girls” or “ladies and gentlemen.”

Thank goodness. I’ve never heard something so offensive in my life!

SCOOP: Disney diversity and inclusion manager Vivian Ware says the company has eliminated all mentions of "ladies," "gentlemen," "boys," and "girls" in its theme parks in order to create "that magical moment" for children who do not identify with traditional gender roles. pic.twitter.com/OWsGTUoeCA

Satan’s work in America must be nearly complete. Disney — an iconic company based on entertainment for kids — now promotes the depraved sexual corruption of children as a matter of corporate policy.

Disney opposes a Florida bill that protects children from being corrupted through deviant sexual indoctrination by their teachers in kindergarten through third grade. That’s just the tip of the iceberg.

In videos posted by journalist Christopher F. Rufo, Disney officials can be seen talking to employees at an “all-hands” meeting about the Florida bill, recently signed into law by Republican Gov. Ron DeSantis, and saying some teams at Disney have implemented an openly “gay agenda.”

The gay agenda takes degeneracy to extremes never before tolerated in the modern world.

SCOOP: I've obtained video from inside Disney's all-hands meeting about the Florida parental rights bill, in which executive producer Latoya Raveneau says her team has implemented a "not-at-all-secret gay agenda" and is regularly "adding queerness" to children's programming. pic.twitter.com/eJnZMpKIXT

What could be more abhorrent than pushing sexual depravity onto children?

President of Disney’s General Entertainment Content Karey Burke revealed on a Zoom call that for her, molding children to be homosexual starts at home. From the New York Post:

“I’m here as a mother of two queer children, actually,” Burke said on the call. “One transgender child and one pansexual child, and also as a leader.”

Only at Disney and in the deepest pit in hell could you hear a mother boasting of grooming a “pansexual child.”

This top executive’s social engineering objectives are more ambitious than merely perverting her own children.

Burke said she supports featuring “many, many” characters who are LGBTQIA, which stands for lesbian, gay, bisexual, transgender, queer (or questioning), intersex, and asexual (or allies).

By the end of the year, Burke said she wants at least half of the entertainment giant’s characters to be LGBTQIA or racial minorities.

SCOOP: Disney corporate president Karey Burke says, "as the mother [of] one transgender child and one pansexual child," she supports having "many, many, many LGBTQIA characters in our stories" and wants a minimum of 50 percent of characters to be LGBTQIA and racial minorities. pic.twitter.com/oFRUiuu9JG

Now that leftists dominate the business world, the evil corporations they used to shriek about actually exist. Evil is not seeking to maximize profits. Evil is what Disney does.

Virtually everyone in the government and media is complicit in the corruption that characterizes Disney, either actively or passively. Two rare exceptions are Ron DeSantis and Tucker Carlson:

DeSantis openly accused Disney of being obsessed with sexualising children Tuesday, questioning why the company is choosing “the hill to die on” as having “transgenderism injected into kindergarten classrooms.”

Appearing on Tucker Carlson’s show, DeSantis was reacting to Disney’s public rebuke of his “Parents Rights in Education” bill which prevents children as young as kindergarten age being taught about transgender and gay sex issues in schools. …

Carlson charged that Disney has a “fixation on the sexuality of children” pointing to recent reports that four employees of the media giant were charged with human trafficking in Florida, with one having allegedly sent sexually explicit texts to a law enforcement agent posing as a teenage child.

Disney is an abomination that should be abolished in the name of decency.

2 thoughts on “Keep your children away from Disney”