“You cannot shout ‘Fire!’ in a crowded room” is not binding law. It was the opinion of one SCOTUS justice, and the case was overturned. This false analogy is used by advocates of #censorship because they hate #FreeSpeech.

Elon Musk bought Twitter to restore free speech. Zuckerbugger bought the election with his bag full of Zuckerbucks. One was legal, the other was not.

Refusing to permit people to speak stems from fear. Fear of what will be revealed.

The big losers of #Twitter embracing #FreeSpeech will be all legacy media. Why would anyone go to the self-censored, highly politicized media when they can watch events unfold in real time documented by the people who are actually there? Their power and profits will crash.

The people most terrified of #FreeSpeech on #Twitter are the barons of #BigPharma. 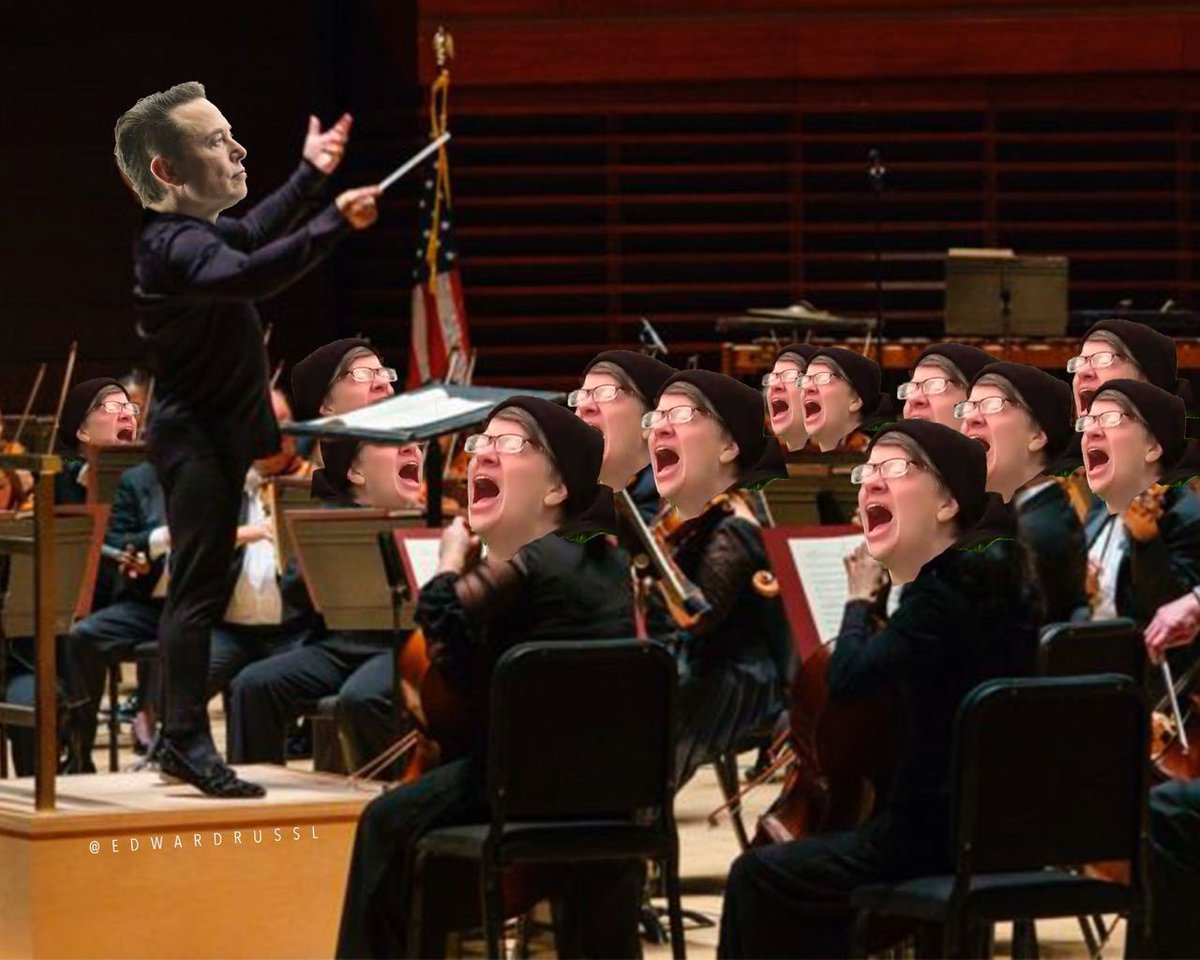 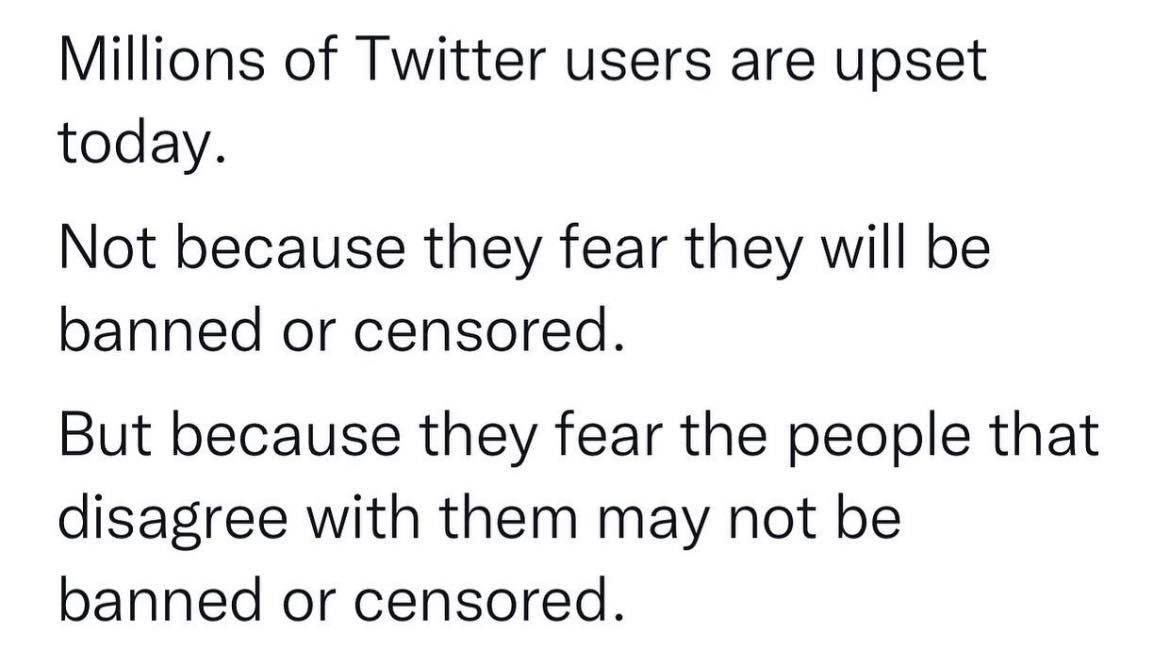 Restoring #FreeSpeech here isn't going to be easy. @elonmusk is in for a huge fight against very powerful people. We spoke to @ggreenwald about that & more. The full interview streams exclusively on @foxnation – plus: unlock free sign-up offers only at https://t.co/voL1Yti7Mo pic.twitter.com/PYeid9Xjez

TWITTER *STILL* HAS A MAJOR PEDOPHILE PROBLEM: UNCOVERING THE COVER UP

The #Left: “I know we said that the apocalypse is going to wipe out all life on earth unless we buy electric vehicles but we’re gonna trash #Tesla – the leading EV – to stop #Musk buying #Twitter and giving the peasants #FreeSpeech. WHAT?! We’re not authoritarians! We’re not…” 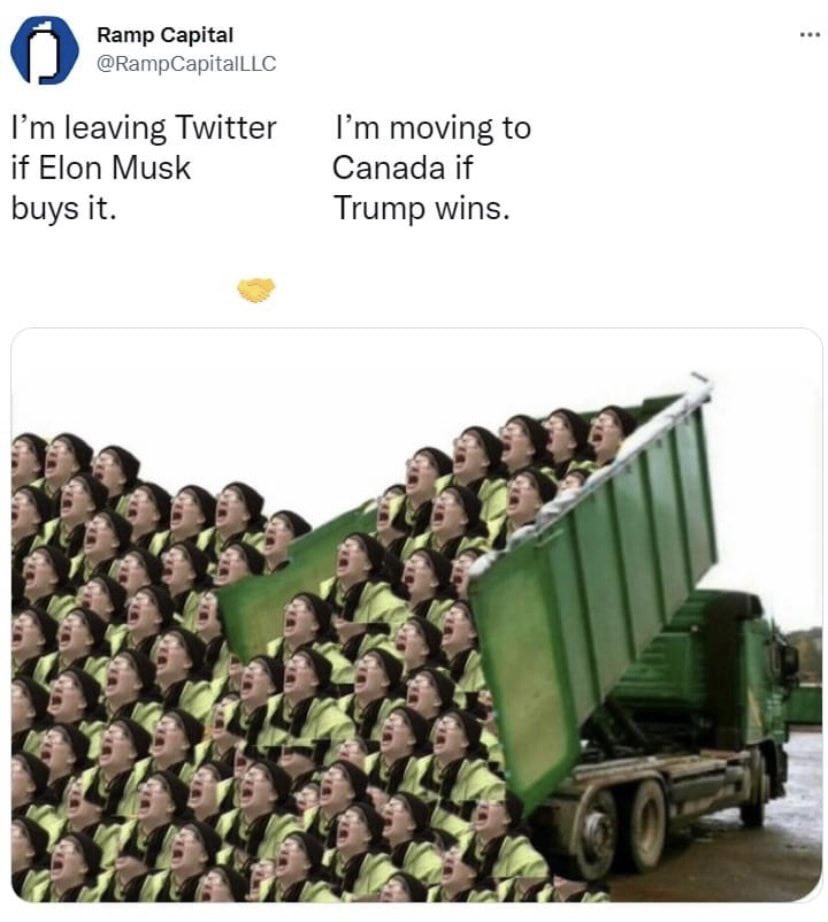 Trump is the rightful president. Biden is illegitimate. Men have a penis. Women have a vagina. The COVID vaxx is designed to kill you. Jan6 was a false flag planned by the FBI.

The cabal springs into action:

Biden’s DHS is creating a ‘Disinformation Governance Board’ dedicated to ‘countering misinformation’ The same people who lied about COVID, Trump, the Laptop from Hell and the Russia Hoax will now be creating a real Ministry Of Truth.

Republican officials ripped recent plans of the U.S. Department of Homeland Security (DHS) to set up a “Disinformation Governance Board” intended to combat “misinformation” online, describing it as an “Orwellian abuse of power” and calling to defund it.

In response, Republicans blasted the move, with many comparing it to the “Ministry of Truth” that disseminated propaganda in the classic dystopian fiction novel “1984,” while others pointed to Jankowicz’ past, accusing her of promoting disinformation herself.

They didn’t need a ‘Disinformation Governance Board’ until @elonmusk threatened their control over the narrative. 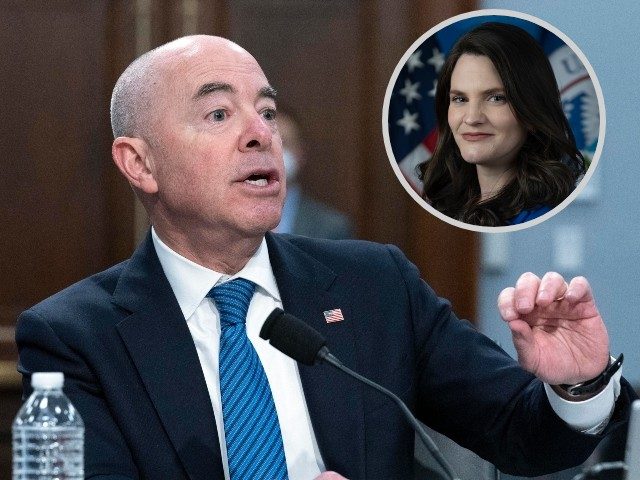 The Department of Homeland Security is setting up a Disinformation Governance Board in an attempt to combat “misinformation” online. 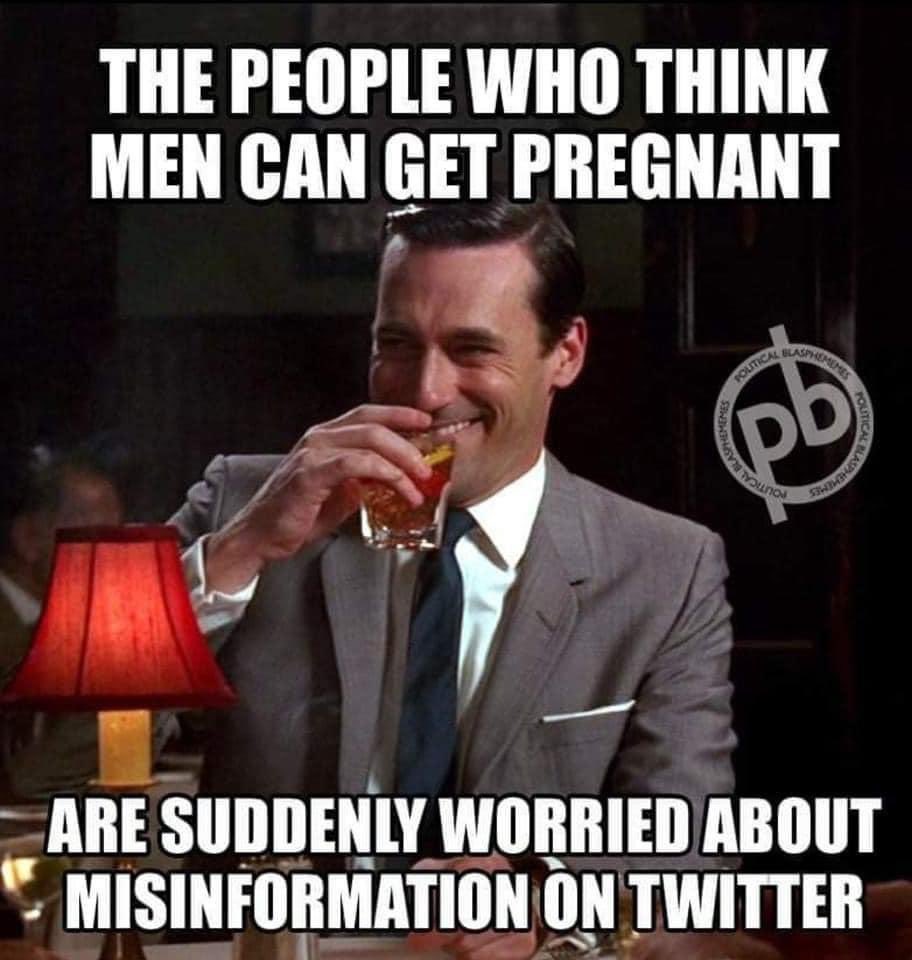 Liberal Twitter Meltdown Tells You All You Need to Know

Of all the media meltdowns over Twitter potentially allowing free speech under Elon Musk’s ownership, this clip of MSNBC host Ari Melber may be the most revealing:

“You could secretly ban one party’s candidate…secretly turn down the reach of their stuff and turn up the reach of something else and the rest of us might not even find out about it until AFTER the election.”

“If you own all of Twitter or Facebook or what have you, you don’t have to explain yourself. You don’t even have to be transparent. You could secretly ban one party’s candidate or all of its candidates, all of it nominees. Or you could just secretly turn down the reach of their stuff and turn up the reach of something else and the rest of us might not even find about it ’til after the election.”

This is exactly what liberals have exploited their control of social media to do. As Jason Rantzputs it, “He’s merely reciting what Twitter did to conservatives.” Twitter is infamous for shadow-banning. Its aggressive suppression of the Hunter Biden laptop story, which implicated Joe Biden in treasonously taking payoffs from our communist Chinese enemies in exchange for influence, possibly cost America the 2020 election.

Mark Dice weighs in, and warns that the liberal establishment will now come after Musk with all its vindictive viciousness, with the intention of totally destroying him for disrupting the left-wing monopoly on control of the information highway:

No one seriously expects Musk to transform Twitter from a left-wing to a right-wing platform. The hope on the right and the fear on the left is that he will make good on his promise to make it a neutral platform that honors the fundamental American principle of free speech. That this sets liberals’ hair on fire tells you all you need to know about them. (Moonbattery)