The strange thing about this case is that self-proclaimed anti-jihadists who have no trouble recognizing Palestinian “Paliwood” War-Is-Deceit propaganda designed to advance the jihad cause by manufacturing Israeli atrocities, and who even recognize fauxtography generated by the Palestinians, Iran, and others for the same purpose, refuse even to consider the possibility that Muslims could have carried out any deceptive atrocity-manufacturing in the Balkans. Indeed, some even charge that anyone who thinks that Balkan Islamic jihadists carried out any deception at all must be secretly a sympathizer of this genocide-that-never-was.

But that, of course, is a common tactic of both Leftists and jihadists: if you can’t refute ’em, defame ’em.

As the saying goes, history is written by the winners. And when it comes to the former Yugoslav peoples, that can readily be described as everybody but the Serbs. So it is unsurprising then that they have been vilified throughout the West, labeled as war criminals and butchers whose unmitigated xenophobia caused the collapse of a great multi-ethnic state and the bloodiest set of wars Europe had witnessed in a half century. Yet much as Joe Biden and other Serbophobic politicians who called for the repeated bombing of Serbia during the Wars of Yugoslav Secession might believe that summary to be accurate, the facts simply do not lend themselves to such a conclusion. This may be no better demonstrated than by looking at Srebrenica, which has long been Exhibit A in the court of world opinion in the case against the Serbs.

END_OF_DOCUMENT_TOKEN_TO_BE_REPLACED 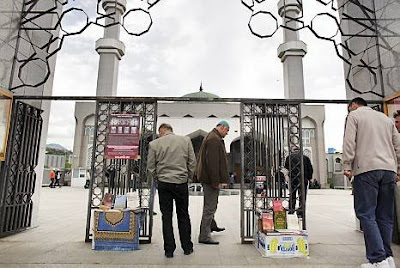 END_OF_DOCUMENT_TOKEN_TO_BE_REPLACED

Muslim with suicide bomber vest arrested in secular, moderate Kosovo, where there is no jihad

Yet another blow to the prevailing wisdom. “Kosovo Albanian with suicide vest arrested,” fromÂ Serbianna, February 16 (thanks toÂ Islam In Action via JW):

Sarajevo: Islam classes in kindergarten seen as part of “obvious attempt to Islamicize the city”

* Ah, but not to worry, didn’t Rotten Totten just travel the country and couldn’t find anything Â other than lots o’love for the good old USA?

Anybody want to guess where this is going, even in modern, moderate, secular Bosnia, where everyone knows there is no jihad or Islamic supremacism?

“It is yet another step in an obvious attempt to Islamicize the city.”