Not only. Afghan ‘youths’ are increasingly draw to jihad, and they don’t practice the ‘inner struggle’ variety…..

A senior NATO official said Osama bin Laden and his deputy Ayman al-Zawahiri are believed to be living in relative comfort in Pakistan houses and not hidden away in a cave.
“Nobody in al-Qaeda is living in a cave,” he told CNN. (BBC)

Funding Pakistan’s double game for another round, even while reports emerge of bin Laden and al-Zawahiri living in PakistanÂ underÂ ISIÂ protection, and even after years of Pakistan’s demonstrable aiding and abetting of jihadists, including theÂ ISI’sÂ backing of the Taliban inside Afghanistan.

TheÂ U.S.Â is allowing itself to be blackmailed, sending Pakistan the message that Washington can be leveraged with the choice of the ongoing, duplicitous policy, or losing even the friendly lip service to cooperation, such as the insistence of Pakistan’sForeign Ministry spokesman: “Let me reiterate that Pakistan is committed not to allow its territory for terrorist actions anywhere in the world.”

Except when it does. Funny how that keeps happening.

According to Bob Woodward’s book, Obama’s Wars, the status ofÂ U.S.Â relations with Pakistan was like a “cold shower“ for the Obama administration. And yet, Pakistan is in line for another $2 billion funded on the backs of the American taxpayer. “Sources:U.S.Â finalizing aid package to help Pakistan fight extremists,” by Elise Labott forÂ CNN, October 18/via JW:

END_OF_DOCUMENT_TOKEN_TO_BE_REPLACED

Former Vice President and Nobel Laureate Al Gore found an unlikely ally in his mission to save the world from the ravages of global warming â€“ Osama bin Laden. In a new audiotape released by Al Jazeera, the terrorist warns that it is industrialized nations that are to blame and urged “drastic solutions” to solve the climate change crisis. (support the climate terrorists!)

CAIROÂ (AP) â€” Al-Qaida leader Osama bin Laden sought to drum up support by taking advantage of Pakistan’s flood tragedy with a new audiotape released Friday criticizing Muslim governments for their slow response and calling for the creation of a new relief body to aid Muslims.

Its worse than you think:

The Jeddah Economic Forum â€” at which Al Gore spewed some of the mostÂ inflammatory anti-American propaganda this side of al-Jazeera â€” was funded in part byÂ Osama bin Laden’s family. Jeddah is bin Laden’s home town.

In January 2002, Bill Clinton was paid $267,000 to address this same forum. You may remember Clinton as the randy ex-President who responded to September 11 by publicly spitting up stuff likeÂ this:

Those of us who come from various European lineages are not blameless. Indeed, in the first Crusade, when the Christian soldiers took Jerusalem, they first burned a synagogue with 300 Jews in it, and proceeded to kill every woman and child who was Muslim on the Temple mound. The contemporaneous descriptions of the event describe soldiers walking on the Temple mound, a holy place to Christians, with blood running up to their knees. I can tell you that that story is still being told to today in the Middle East and we are still paying for it. Here in the United States, we were founded as a nation that practiced slavery and slaves were, quite frequently, killed even though they were innocent. This country once looked the other way when significant numbers of Native Americans were dispossessed and killed to get their land or their mineral rights or because they were thought of as less than fully human and we are still paying the price today. Even in the 20th century in America people were terrorized or killed because of their race.

America was Â spared the catastrophe of an Al Gore presidency. But that doesn’t mean al-Gore can’t follow in Slick Willie’s footsteps.

The Goracle gets shouted down: “Global warming is a fraud!”

END_OF_DOCUMENT_TOKEN_TO_BE_REPLACED

Bin Laden makes common cause with the warmists

Osama bin Laden is naturally a global warming worrier, too, being an enemy of modernity and its freedoms:

Al-Qaida leader Osama bin Laden has called for the world to boycott American goods and the U.S. dollar, blaming the United States and other industrialized countries for global warming, according to a new audiotape released Friday.

In the tape, broadcast in part on Al-Jazeera television, bin Laden warned of the dangers of climate change and says that the way to stop it is to bring “the wheels of the American economy” to a halt.

He blamed Western industrialized nations for hunger, desertification and floods across the globe, and called for “drastic solutions” to global warming, and “not solutions that partially reduce the effect of climate change.”

Of course, bin Laden may just be appealling for allies in his crusade to bring back the Stone Age. Interesting that he feels they may be found among global warming extremists.

The speech, which included almost no religious rhetoric, could be an attempt by the terror leader to give his message an appeal beyond Islamic militants.

Is bin Laden’s endorsement of global warming science what they mean by “peer review”? And what will be this joint movement’s slogan:Â Save the planet! Destroy America.

“He seemed to beÂ treating women with contempt, and his conduct warranted a disciplinary hearing.”

Who guessed it? This touchy feely polit-kommissar for Â Islamic causes displays all the usual traits, attitudes andÂ atmosphericsÂ that come as a package. A Muselmanic package, so to speak. A scruffy beard? Check.Â Misogyny? Check. Disregard for infidel laws? Check. Milking the infidels for discrimination? Check. An obsession with special rights that would elevate him over the infidels? Check. Just ask him about how he feels about Israel and Jews, then you know everything…

A Muslim police officer, who claims a boss compared him to Osama Bin Laden, was fined for boasting about hisÂ sexual performance and use of Viagra, it emerged yesterday.

An employment tribunal heard how Pc Tariq Dost, 40, from Birmingham, who is claiming racial and religious discrimination against West Midlands Police, was fined 13 days’ pay and “came close to dismissal” over the incident.

END_OF_DOCUMENT_TOKEN_TO_BE_REPLACED END_OF_DOCUMENT_TOKEN_TO_BE_REPLACED

* We knew it all along, but now it’s confirmed:Â 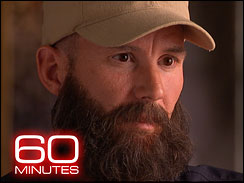 (CBS)Â The man who led the Pentagon’s mission to kill Osama bin Laden says the Afghan allies he was forced to use may have undermined his operation. He also tellsÂ correspondent Scott PelleyÂ his superiors scuttled the most effective plan of attack against the al Qaeda leader.Â