Pat Condell takes on the Zionhass in the ‘progressive’ enemedia:

Posted ByÂ Alan M. DershowitzÂ On April 1, 2011 (this is not an April joke!) InÂ Daily Mailer,FrontPage

I recently completed a “speaking tour” of Norwegian Universities on the topic of “international law as applied to the Israeli-Palestinian conflict.”Â  The sponsors of the tourâ€”a Norwegian pro-Israel groupâ€”offered to have me lecture without any charge to the three major universities in Bergen, Oslo and Trondheim.Â  Norwegian universities, especially those outside of Oslo, tend to feel somewhat isolated from the more mainstream academic world, and they generally jump at any opportunity to invite lecturers from leading universities.Â  Thus, when Professor Stephen Walt, co-author ofÂ The Israel Lobbyâ€”a much maligned critique of American support for Israelâ€”came to Norway, he was immediately invited to present a lecture.Â  Likewise, with Ilan Pappeâ€”a strident demonizer of Israelâ€”from Oxford. Â Many professors from less well-known universities have also been invited to present their anti-Israel perspectives.

END_OF_DOCUMENT_TOKEN_TO_BE_REPLACED

If you doubted how evil the UN is — look no further. Co-opted lock, stock and barrel by the Mohammedans.

Morocco [Muslim] andÂ Mali [Muslim] introduced an amendment on behalf of African and Islamic nations that called for deleting the words “sexual orientation” and replacing them with “discriminatory reasons on any basis” in a resolution condemning unjustified executions.

How is that leftist/Islamic alliance thing going for ya, LGBT crowd? No comment from ‘Queers for Palestine.’

“Freedom is my Religion”

Pat Condell says he has been excommunicated by his fellow atheists for speaking out against Islam:

“Political Islam is a Threat to All Civilized People”

Pat promotes the book Muslim Mafia: ,written by Dave GaubatzÂ  Inside The secret underworld to Islamize America. Dave was the first U.S. Federal Agent in Iraq in 2003. He has publicly exposed numerous Muslim Brotherhood supporters, including Hamas-linked CAIR.

The Cordoba House is now Park51.

“We came, kill and conquer in the name of Allah…”

Yvonne Haddad, a professor at the Center for Muslim-Christian Understanding at Georgetown University: Â “Americans have always been open toward religion and prayer and people’s faith as a private space,” Ms. Haddad said. “But building mosques makes a statement that ‘we are here and we are here to stay,’ and some people would like to wish them away.” (NYT)

Check out the link “Dr Yvonne Haddad” . She Â lies when her lips move. This is your typical Islamo-agit-prop with a cherry on top!

Nonie Darwish on the Gates of Vienna:

The Silence of the Imam

WoJ posted this video before. Here Â is Pat again, because the corrupt dhimmies in NY and mayor Bloomberg are about to rubber-stamp the application for this abomination.

Godless comic and political commentator Pat Condell’s rants will be called “hateful” and “xenophobic” at best by those progressive free thinkers out there who, Obamaesquely, believe all nastiness and hate in the world will simply go away if we just understand the Islamic world a little better (and take down America a few more pegs while we’re at it). On this occasion, Condell pretty much nails all that is wrong with both Islam and the Ground Zero Mosque in one 6-minute rant. He opens:

All you Americans who’ve been following the Islamization of Europe from afar with horrified incredulity: if any of you are still nursing the cozy illusion that it could never happen in your country, it’s time to wake up and rub those sleepy eyes, because the moment of truth has arrived.

As most people know islam doesn’t tolerate neither democracy nor freedom of speech, therefore islamists have not right to enjoy the freedom of the democratic countries, which they so eagerly want to destroy.
Any logically thinking being realizes that one should not give freedom to those who want to abolish it.
Tolerance is a crime when applied to evil.

A Pound for a Brown

Nigerians in the Home Office and Pakistanis in the Foreign Office: No Wonder Britain Is the World’s Laughing Stock

It comes as no surprise Â to learn that what the media call “British Pakistani” Anjoum Noorani was the leader of the Foreign Office’s Papal Visit Team which drew up a document mocking the upcoming papal visit.

According to reports, Mr Noorani has been moved to “other duties” after he gave authorisation for the memo to be sent to Downing Street and three Whitehall departments.

It would not even be possible to conceptualise British people working in the Pakistani Department of Foreign Affairs, or Yorkshiremen running the Nigerian Department of Internal Affairs and issuing permits for other people to enter Nigeria.

Yet this is precisely what is happening in Britain today, courtesy of decades of insane immigration policies pursued by both Tory and Labour parties. Read it all

The British National Party has announced its plans to launch a last minute newspaper advertising campaign in key areas to focus voter attention on the contempt with which Gordon Brown and the Labour Party hold the public, as revealed by the “bigot” gaffe, Nick Griffin MEP has announced. Â More

Brown and the bigot

Gordon Brown demonstrates the arrogance of the committed high-immigration politician:

BRITISH Prime Minister Gordon Brown was forced to make a humiliating apology today after he wascaught on microphone calling a senior citizen “bigoted”.
Mr Brown was confronted by the 66-year-old woman, Gillian Duffy, while election campaigning in Rochdale, northern England.

After spending nearly five minutes answering her questions about immigration and migrant workers from Eastern Europe, he told her, “It’s been very good to meet you,” before getting into a car.

However, a Sky New wireless microphone picked up his words to an aide as he was driven away.

He said, “That was a disaster … You should never have put me with that woman … Whose idea was that?”

His aide then asked, “What did she say?”

He replied, “Oh, everything, she’s just a sort of bigoted woman who said she used to vote Labour.”

Ms Duffy, who worked for 30 years at Rochdale’s local council and still works with handicapped children, told reporters: “I’m very upset … He’s an educated person. Why has he come out with words like that?

Why? Because if you don’t can’t explain why you’re importing so many people that the country is changing its very character, and not altogether for the best, then at least by abusing your questioners as racist or bigoted, you can escape not just with your dignity intact but your self-regard enhanced.

Thanks to eye on the world blogspot

“The more I know, the disgusting it becomes…”

It would help if he knew a little more.

These are the earlier, the more tolerant Meccan verses. After the hijra to Medina and after raiding the caravans of the Jewish tribes the meshugga profit changed the tune.

These verses were then abrogated, replaced with the killer stuff that drives Muhammedanism to this day…..

Koran 2:106 Whatever a Verse (revelation) do We {Allah} abrogate or cause to be forgotten, We bring a better one or similar to it. Know you not that Allah is able to do all things?

“That Pungent Mix of Authoritarianism and Cowardice”

thanks to the Gates of Vienna

Would be nice to have Â the transcripts to some of his best speeches. Any idea where we can get them?

Wilders trial: “I much look forward to seeing Wafa Sultan take the stand. Though I slightly pity the prosecution for having to attempt to cross-examine her.”

Douglas Murray points out some of the many, many absurdities of the Wilders free speech trial in the Netherlands. “The trial of Geert Wilders: why we won’t be hearing about camel urine,” by Douglas Murray in theÂ Telegraph, February 4 (thanks toPamela):

[…] When the trial opened a fortnight ago, Wilders asked for a rather sparky list of 18 expert witnesses. They included some noted experts on Islam and social cohesion. And also a few, ahem, practitioners of the same. They were to include Mohammed Bouyeri, who shot, stabbed and partly beheaded the film-maker Theo van Gogh in Amsterdam in 2004. And also Yusuf al-Qaradawi, the jihadist cleric who was given the red-carpet treatment in London by former mayor Ken Livingstone a few years back.Sadly the Dutch court haven’t allowed these witnesses or most of the others, leaving the defence with only three witnesses. They are expert Simon Admiraal and leading Dutch scholar Hans Jansen (author of numerous scholarly books and the hilariously titled recentÂ Islam for Pigs, Donkeys, Monkeys and Other Beasts). Most interestingly the court has allowed Wilders to call as an expert witness the brave and eloquent Wafa Sultan.

Sultan made her name – and garnered her first fatwas – for a blinding hit-the-ball-out-of-the-stadium interview on Al Jazeera a few years ago viewable here. It caused terrible convulsions across the Muslim world, and also apparently in Sheikh al-Qaradawi who described her home-truths session as consisting of “unbearable, ghastly things that made my hair stand on end.”

I much look forward to seeing Wafa Sultan take the stand. Though I slightly pity the prosecution for having to attempt to cross-examine her.

But I can’t help feeling disappointed that Qaradawi won’t be appearing.Â Although he believes talking about the contents of the Koran is “unbearable, ghastly and makes his hair stand on end”, I have always thought it interesting that he doesn’t find at all hair-raising – in fact he has even been quoted on his own website as defending – certain forms of female circumcision.…

Indonesia’s blasphemy law is a case study in why such laws against insulting or defaming religions, as championed by the likes of theÂ OIC, should be flatly rejected in the West. 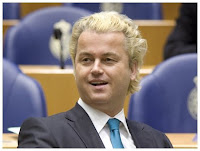 Is he theÂ only person in Europe who gets it?

“The war against Israel is not a war against Israel. It is a war against the West. It is jihad. Israel is simply receiving the blows that are meant for all of us. If there would have been no Israel , Islamic imperialism would have found other venues to release its energy and its desire for conquest. Thanks to Israeli parents who send their children to the army and lay awake at night, parents in Europe and America can sleep well and dream, unaware of the dangers looming.”