Too funny when liberal interfaith peaceniks, diehard progressives and Marxist Obama supporters pretend to be better Christians then those who oppose Â Islamofascism. They even invoke the Vatican, Sarah Palin and Â Pat Robertson to Â keep them save from Mohammedan Â R A G E…….

A reminder from KGS:

Hey, when it’s Christian Bibles, it’s OK to burn them! The brouhaha over US military members who were given Bibles to hand out to potential Christian converts in Afghanistan, erupted over a year ago, after a story in al-Jizz was released showing US soldiers praying and talking about conversions of Afghanis.Â Flashback: US military destroyed bibles meant for future Afghan converts…..

You know what happens when you take a bible to Saudi Arabia? Try wearing a cross or a star of David, or organize prayers at your own home in Jeddah. Chances are that you end up in jail, tortured and flogged. Year in, year out, Muslims burn churches and temples, Â kill, rape and maim Christians, Hindus, Jews, Bahai and even fellow Muslims. And now, a pastor in Florida with 50 followers gets the blame Â for causing Islamic jihad? WTF is wrong with us?

Hannity interviews Terry Jones, the controversial pastor from Gainesville, Florida about his upcoming event which is burning the Quran on September 11th.

“we do not tolerate their threats, their fear, their radicalness. We live in the United States of America.”

WASHINGTON (AP) — Pakistan’s ambassador to the United States is calling on conservative radio and television host Glenn Beck to denounce the planned burning of the Quran to show that Americans are tolerant of other faiths. (AP)

END_OF_DOCUMENT_TOKEN_TO_BE_REPLACED 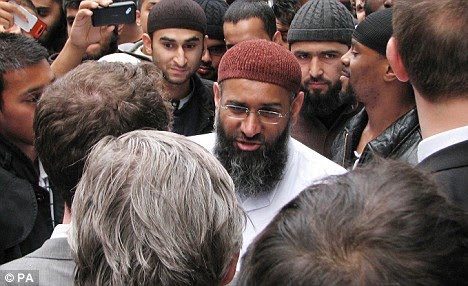 END_OF_DOCUMENT_TOKEN_TO_BE_REPLACED

Scotland’s largest police force has promised to “oppose” a demonstration by anti-Muslim extremists if the event is intent on stirring up “racial hatred”.

Looks more like the pandering, lazy police skirts of Scotland are hiding behind the pretentious “racial hatred’ shield not to do their job. Their job includes Â upholding the right of free speech and expression, and it also puts the onus on them Â  to protect demonstrators who want to exercise their G-d given right to Â free speech. Â That includes the right of Scots to participate in any protest Â against Â Islamization of their country without being vilified and criminalized.

Yes, we all know that Islam is a Religion of Peace and if you say we Â Mohammedans are not peaceful we smash up the place. But the law is still the law and the law must be upheld: Fiat Justicia et Pereat Mundus!

A spokesman for Strathclyde Police made the comment about a procession by the newly-formed Scottish Defence League (SDL) that is pencilled in for November.

Anti-racist campaigners believe the far-right group wants to hold its rally near a mosque in Glasgow, or at a venue that is being lined up as a Muslim place of worship in Kilmarnock.

The SDL is thought to be affiliated to the English Defence League (EDL), an organisation that has staged protests this year against what it calls “militant Islam”.

END_OF_DOCUMENT_TOKEN_TO_BE_REPLACED

* Atlas Shrugs has more on the brutal crackdown…

Judeopundit: IRIB RadioÂ seems to be the one Iranian news agency which always gives Ahmadinejad the title “Doctor.”

Iran’s President, Dr. Mahmoud Ahmadinejad emphasized that Islamic Republic of Iran is a forerunner in democracy and global management. According to IRIB, addressing Iran Armed Forces Industrial Research Festival on Sunday, President Ahmadinejad underlined that currently Islamic Iran pioneers the scientific scenes, democracy, and global management and that the recent presidential poll is the beginning of the end of World Arrogance domination over the world.

President considered 10th presidential poll as a source of major development in international relations and underscored: “In this election, the role model of democracy that was displayed in Iran was unprecedented and exclusive such that it challenged the democracies in Western countries.”

President noted: “In Western countries, democracy is 100% controlled and people’s role is ceremonial. But, what happened in Islamic Iran was the true manifestation of the nation’s resolve and determination.”