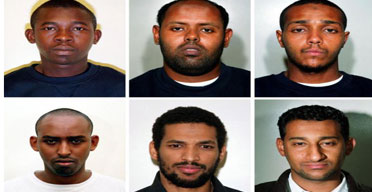 *
LONDON (AFP) – Dramatic CCTV footage of the moment an alleged would-be suicide bomber tried to blow up a London Underground train was shown at the trial of six Muslims accused of a failed terrorist attack.

Ramzi Mohammed, 25, was shown boarding the train and turning his back to a mother with a child in a pushchair before allegedly trying, and failing, to detonate a bomb in his rucksack.

Prosecutors say that Mohammed left a suicide note in which he begged Allah to admit him “to the highest station in paradise” and told his son: “We shall meet again in paradise, God willing.”

He is one of six men being tried at Britain’s highest-security court, accused of hatching an extremist plot to carry out a string of suicide bombings on the capital’s public transport system.