The facilitators of the global jihad, the utterly corrupt and useless United Nations,Â  want to hand Kosovo over to the Mohammedans. They are not saying it clearly, of course. They are making their best efforts to try to package it nicely in a way that the unsuspecting public in western Europe stays calm and goes back to sleep.

Kosovo ‘should split from Serbia’

Ethnic Albanians overwhelmingly want to break away from Serbia
Kosovo will be allowed to separate from Serbia and use its own national symbols under proposals to end its limbo status drawn up by the UN’s special envoy.
Martti Ahtisaari’s plan does not mention the word “independence”, but that is virtually what is on offer, Western diplomats told the BBC.

Mr Ahtisaari will present his plan in Serbia later on Friday.

The UN has administered Kosovo since a Nato bombing campaign forced Serbian troops to withdraw in 1999.

Talks to determine Kosovo’s final status have been continuing for years without the two sides coming to agreement. 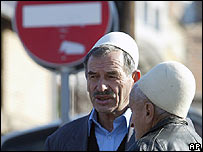 Ethnic Albanians want a Muslim stateÂ  (Make that ‘Caliphate’)
To be honest, I am a bit scared of what we are coming toÂ

Ethnic Albanians, who make up 90% of the province’s two million people, overwhelmingly want to break away from Serbia.

But Serbs regard the province – which is still officially part of Serbia – as the cradle of their culture, and oppose any solution that would lead to its independence.

Mr Ahtisaari’s plan, however, amounts to “independence, subject to international supervision”, said one Western diplomat, who wished to remain unnamed.
Â Read it all…

One thought on “Throwing Pearls to Swine”