Karachi (AsiaNews) â€“ Leaders of theÂ Tehreek-e-Taliban Pakistan have warned that theirÂ boys and girls aged 10 to 20 are ready for a “Jihad against the infidels.” Addressing a press conference on Tuesday in Anayat Kalley, a few kilometres from the headquarters of the Bajaur Agency, a tribal area near the Afghan border, Tehrik’s deputy chief Maulana Faqir Mohammad and spokesmanMaulvi Omar said thatÂ “a ‘fidayeen squad’(suicide bomber squad) comprising 10- to 20-year-old boys and girls, was ready to carry out attacks if the government did not immediately stop its operations in the Swat Valley and reverse its decision to launch military operation in other tribal areas.

Read: if you don’t do what we say, we’ll have our children kill themselves.

In the meantime arrangements have been made to effectively wage a “Jihad against the infidels”.

(RTTNews) – Two suspected pro-Taliban militants were killed while attempting to detonate explosives in an effort to blow up a school in Pakistan’s northwestern valley of Swat, according to media reports quoting the police.

* Lovely when they get their premature explosions virgins:

Maulvi Omar said that Tehrik’s chief, Baitullah Mehsud, held consultations with key Taliban commanders and they agreed that the only way to effectively counter the government’s plans was to launch massive terror attacks.

“We don’t need no education” 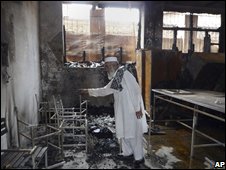 More and more schools are being destroyed in Swat

Ten schools have been destroyed in the district in the last four days.

Nearly 70 state-run schools have been burnt down in the area in recent months, affecting over 17,000 students.

There has been no word from militant groups in relation to the latest arson attacks, but local militants group have admitted to such attacks in the past.

MINGORA, Aug 6: Commander Ali Bakht, a close aide of Maulana Fazlullah, and 13 other militants were killed in Swat on Wednesday.

Major Farooq of the Army Media Centre in Swat told Dawn that nine top militants, including Ali Bakht, had been killed during an operation in Deolai area of Kabal tehsil early in the morning.

Two security personnel and several militants were injured in an exchange of fire.

Ali Bakht was buried in ancestral graveyard in Deolai in the evening. Militant commanders and a large number of people attended the funeral.

The forces blew up houses of Ali Bakht and local commander Fazalur Rehman during the operation. According to local people, both the commanders were in the houses during the attack.

Military sources said the militants had been killed in crossfire when they opened fire on security personnel. A militant, identified as Fazal Rahim, was arrested.

Ali Bakht was among the top 25 commanders of the Tehrik-i-Taliban (Swat chapter) who had negotiated the May 21 peace agreement with the ANP-led provincial government. He also liaised between the Swat district government and the Taliban.

He was earlier in the Awami National Party but quit and joined the Tehrik Nifaz-i-Sharia Muhammadi. He later joined the forces of Fazlullah.

He was the fourth Taliban commander killed in the current military operation in Swat.

Three militants were killed when an explosive device they were planting in a government school in Aligrama exploded.

Another militant was killed in a crossfire which followed an attack on the Shahdara police station near Mingora.

Militants blew up a soap factory in Rahimabad on Wednesday morning. Most of the workers in the factory were women. However, there was no casualty.
Helicopter gunships pounded militants’ hideouts in Gut, Peuchar, Namal, Charbagh, Malam Jabba, Deolai, Mancha, Shah Dheri and Shamozai.

6 thoughts on “Its all about Israel, right?”