*Â The IndependentÂ reportedÂ that “Germany’s council of Muslims called the conference an unparalleled abuse of freedom of opinion.”

* Slideshow from Spiegel Online: can you spot the fascists?

Instead, it was the extreme left, a combined force of rabid anarcho’s, commies, ferals and you-know-who-the-usual-suspects are, who went on the attack. Shamelessly supported by the authorities and the outrageously stoopid, criminal behavior by Â the Christian-DemocratÂ mayor of Cologne,Â Fritz Schramma, who was trying to outdo his Belgian Â communist mayor-colleagueÂ Freddy Thilemans, who has now for 2 years in a row outlawed any anti-Islamic demonstrations. Simply because he is totally in the pocket of the Islamics: the majority of the Brussels city council are Muhammedans or ride on the Muhammedan ticket.

* Â Here, in the report from Brussels journal, Filip Dewinter tells it like it is:

Â Filip DewinterÂ criticised Fritz Schramma, the Christian-Democrat mayor of Cologne and a proponent of the mosque, who had exhorted his townsmen to demonstrate against the Pro Cologne gathering and toÂ display their “intolerance”Â towards Pro Cologne. Dewinter compared Schramma to Freddy Thielemans, the Socialist mayor of Brussels, who for two consecutive yearsÂ has bannedÂ demonstrations commemorating the 2001 9/11 terror victims in Manhattan because he does not want to upset the Brussels Muslims. “Brussels and Cologne have mayors who kneel and submit to Islamisation,” he said. 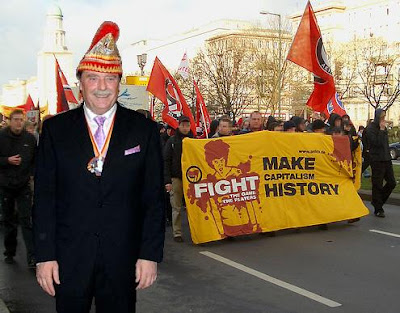 “These brown BiedermÃ¤nner [Bieder-men, a smear word for conservative people from the southern hinterland of Germany] are in reality arsonists, racists in bourgeois outfits, subtle fear mongers,” he warned in front of thousands of [Leftist] demonstrators. “This dirty clique of Euro fascists, these Haiders and Le Pens [who wasn’t even planning to attend the Congress] and whatever their names may be, I call to them: There is the exit, that’s the way back home!”

According toÂ Deutsche Welle, “the mayhem also hit rail links. A signal box on the edge of town was set on fire in the early morning by persons unknown, forcing the closure of a main line for several hours and the diversion of 12 national express trains.” 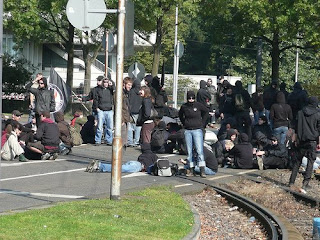 Violent protests by leftists forced the cancellation of a far-right rally against the influence of Islam in Europe and prompted the detention of 500 people, German authorities said Sunday.Â Â

The street battles came on the sidelines of a two-day congress organized by right-wing extremists on the purportedly growing dominance of Europe’s Muslim minority and the construction of one ofÂ Europe’s largest mosques here.

The clashes that ran into the night Saturday overshadowed a peaceful protest by tens of thousands of people against the “anti-Islamification” congress, police chief Klaus Steffenhagen told reporters.

Carrying banners reading “We areÂ CologneÂ — Get rid of the Nazis!” protesters gathered outside the citys landmark cathedral to oppose the congress organized by the local far-right group Pro-Koeln (For Cologne).

Organizers said about 40,000 people turned out for the demonstration for peaceful coexistence between Muslims and non-Muslims inÂ Europe, an event backed by the German government and authorities in this western city.

One hotel even cancelled bookings made by “undesirables”.

A leading figure in the Greens party, Volker Beck, welcomed the “victory of civil society against the far-right”.

Pro-Koeln had begun two days of seminars Friday during which about 300 participants from acrossEuropeÂ denounced a Muslim “immigrant invasion” on the continent.

Earlier Saturday, police banned an outdoor rally organized by far-right adherents inÂ CologneÂ just as it was about to begin, following the clashes with a violent fringe of counter-protesters.

“This was not a protest but was unbridled violence against our police force and those who wanted to demonstrate peacefully inÂ Cologne,” he said.

Some 3,000 police officers were deployed and used truncheons and water hoses to fend off violent “anti-fascist” leftist activists.

Pro-Koeln has five elected local councilors and is chasing other official positions in the region.

Over at Tundra:Â CNN reporter labels pro-KÃ¶ln supporters “as Neo-Nazis” inÂ video report. The woman is as clueless to who the Nazis are, though they are in front of her blocking streets and railways all throughout the city. The media are in bed with these thugs as much as the government. Listen to the journalist/activist, Diane Magnay, then proceed to paint the city of Cologne as bigoted anyways, because they forced the mosque to reduce the size of its minarets. Nothing but total submission to intolerant religionists will suffice for these idiots on the Left, and in the Leftist media. Morons.

NOTE:Â While we expect radical Lefties to wrongly depict their opposition as “neo-nazis” in order to shut them up and drive people away from what they’re trying to convey, the media has no right in depecting them as such. After all, the media is supposed to cling to the creed of being “fair and balanced”. Eh,…yeah riiiight.

Fjordman explained the way it is,”In Norway, a Communist journalist for the left-wing Multicultural (and rabidly anti-Israeli and pro-Obama) national newspaper Dagbladet reported that “right-wing extremists” and “Nazis” were sent packing from Cologne this weekend. End of story. The fact that peaceful participants, including Jews, were beaten up by these “anti-Nazis” wasn’t mentioned. Dagbladet’s long-timeÂ cartoonist Finn GraffÂ in 2006 published a cartoon depicting Israel’s PM Olmert as a Nazi concentration camp commander. The scene was taken from the movieÂ Schindler’s List, in which the commander shoots down a Jew from his balcony. Mr. Graff declared only half a year earlier that he would not draw a cartoon of Muhammad out of fear and “respect.” This same newspaper later passionately backed the left-wing Norwegian government when they wanted to use tax money to openly fund the then Hamas-led Palestinian government. As we know, the ideology of Hamas is virtually indistinguishable from Nazism, except for the fact that its members have a slightly darker skin color than did old Adolf. But supporting the Nazis of our time is just fine. The real Nazis are the anti-Islamists. This is how Western Europe is actually like, and LGF bought this elitist disinformation hook, line and sinker.

The state-funded Islamic Council of Norway openly admit that they get “spiritual guidance” from the Muslim Brotherhood’s spiritual leader Yusuf al-Qaradawi and his Fatwa Council. That’s OK. Meanwhile, a left-wing Multiculturalist named Lars Gule, who was arrested for and has openly admitted to traveling to the Jewish state of Israel with dynamite in his backpack in order to blow up stuff, suggested on a major blog recently that the security services should have me under surveillance because I am an “extremist.”

One thought on “500 'Right-Wing Extremists' Arrested in Cologne Demo Against Islamization!”