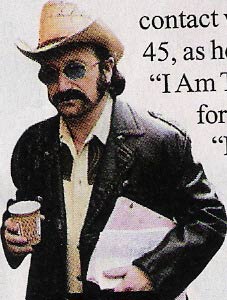 I’ve had more than enough of limousine, private jet liberals–especially wasteful celebrity hypocrites–telling hard-working Americans how their money must be spent.

Sadly, Bono was courted by not just the Clintons but every high-ranking member of the Bush Administration, including the star-struck President, himself. They, Jesse Helms, and pseudo-conservative Laura Ingraham repeatedly slobbered and gushed over this fraud in rose-colored (in his case literally) glasses.

Ingraham is smart to see the value in talking about global and national issues with [U2’s frontman Bono] who is, not only in the spotlight, but has the respect and admiration of so many listeners.

Bush, with Bono by his site,Â announced he was forgiving a good deal of American taxpayer money owed by Terrorist SudanÂ and other countries ruled by despots.

Yes, faux-conservatives like Bush and Ingraham–not liberals–legitimized Bono, which led him on the path to this new gig.

Would love to read an op-ed by Bono about how and why he doesn’t pay a dime of taxes in his native Ireland (under a tax break for artists and entertainers), and why he feels people who actually do pay their share here in America should pay for him to feel good in his has-been days.

I’d love to hear in an op-ed why Bono employed a convicted IRA terrorist as his bodyguard, or why–if he’s so concerned about the poor and downtrodden–right after the 9/11 attacks, he and U2 skipped a scheduled concert performance to raise money for the familes of fallen heroes’ and victims’ families, but then showed up to a paid gig at Madison Square Garden, lecturing concertgoers to have “empathy for Muslims. They go to church, too.” Really? And I thought it was a mosque. But what do I know?

I’d also like to know why he–if he’s so concerned about the downtrodden–he pursued an extensiveÂ lawsuit against a destitute former assistant to get $5,000 in clothes he gave her twenty years ago.

Since his American concert tours are among the most successful in recent years,grossing upwards of $260 million, maybe he’ll write about just how much of that he, himself, gives to charity, instead of constantlyÂ schnoringÂ [Yiddish for “mooching”] from America and calling them “stingy” and “cheap”.

Bono’s “Red” campaign to raise money for debt forgiveness and AIDS relief in Africa–with all of its fanfare on Oprah, at The Gap, and elsewhere–was a huge failure, just like his wife’s eco-friendly clothing line, Edun, is. I predict the third strike with his hypocrisy in print on the pages of the New York Fishwrap. Sadly, unlike in baseball, the three strikes won’t mean he’s out.

What’s next–the New York Times inviting Elizabeth Taylor and Baba Wawa to give us tips on how to have a successful marriage? Maybe George Michael and Clay Aiken can write about what it’s like to be a heterosexual on the pages of the “Newspaper of Record,” too.

I have an even better idea: Jeffrey Dahmer can arise from the dead and write the New York Times food column.

I repeatedly come back to the one-timeÂ quote from Kiss’ Gene Simmons a/k/a Chaim Witz, who unfortunately doesn’t take his own advice:

We don’t comment on whales and the rain forest. We don’t try to be ambassadors to Bosnia. Duh. You need a rock star for that? Some idiot who couldn’t tune a guitar six months ago is now an environmental specialist? I blame media for giving rock stars more credence than they deserve. Why don’t they ask Al Gore how to play bass?

Read some of my previous columns and posts on Bono:

* “Not a Good Samaritan: TIME’s Phony Person of the Year”