Modena, 9 Oct. (AKI) – Muslims in the northern Italian city of Sassuolo plan to protest on Friday against what they claim is the town council’s refusal to allow them to build a mosque.

*Â Milan mosque ‘to be closed down’/ lots o’ pic’s 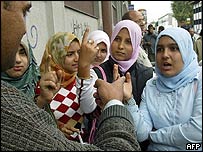 “Tomorrow we will perform Friday prayers in the street, to protest against the municipality for not allowing us to have a mosque,” said Hisham Abu Marwan, spokesman for the Islamic Association Huda of Sassuolo, in an interview with Adnkronos International (AKI).Â

The Muslim community, guided by Egyptian-born imam Sheikh Tareq, said it wanted to continue protesting against the council which had ordered police to close the prayer hall that the community had been using for more than 10 years.

“We will pray in the street in front of the mosque that was shut down, and there will be several hundred of us so that the municipality does not discriminate against us,” said Abu Marwan.

“We wanted to follow the rules and so we rented a new place where we could pray, but the authorities deemed it unsuitable because they said it is located in an industrial area and not an appropriate place to carry out religious activities.”Â

Abu Marwan said that explanations from city authorities are nothing but excuses and asked them to allow them to pray in the place that they rented.

The council offered the group a temporary place of worship located five kilometres outside of Sassuolo. But Abu Marwan said the location was too far away, and the community was looking for a permanent solution instead.

At least 300 Muslims from Sassuolo, an industrial city near Modena, have been praying in the past few days outside the mosque closed by the authorities.Â

There is a considerable number of Moroccan immigrants that work in the ceramic factories in Modena who have been living there for years.

4 thoughts on “Italy: Muslims try to force authorities into building a new mosque”