* Â Because this one will be an Islamic propaganda flick.

* Yep, if we don’t make it who will? Would be interesting to film the mass-killing on theÂ Banu Quraiza and how Muhammad divided the spoils, the rape of captured Â women and their enslavement, along with the practice of “Azl” -(explained at the bottom of this page)

Â
‘The Messenger of Peace’ will be set during time of Prophet Mohammed, focus wholly on rich values of Islam.

DUBAI – Producer Oscar Zoghbi, who worked on the “Halloween” series of Hollywood movies, has joined a team working on a new picture on the birth of Islam, according to details unveiled in Dubai Monday.

Titled “The Messenger of Peace”, the movie will be set during the time of the Prophet Mohammed, a media statement by the production company said.

Zoghbi, who was more recently involved in redeveloping Twickenham Studios in Britain, also contributed to making the 1977 film “The Message”, regarded as the only epic to portray early Islam.

The new film “is not about division and conflict but will focus wholly on the rich values common to all Muslims, like compassion and tolerance,” Zoghbi said.

Having worked with Moustapha Akkad, director of “The Message”, Zoghbi said he appreciates the sensitivities and challenges linked with the subject of Islam.

As with “The Message”, there will be no depiction of the Prophet Mohammed on screen, as images of the prophet are strictly forbidden in Islam.

“Since 9/11, Islam’s image has suffered tremendously,” said Hajja Subhia Abu Elheja, an international film financier and executive producer of the new movie. “Now more than ever it has become important to bridge the gap of understanding between Muslims and non-Muslims.”

“It is telling that only one great historical film has ever been made about Islam, a religion with 1.5 billion followers, whereas Christianity has been the subject of over 30,” he said.

Hollywood director Ramsey Thomas, also linked with “Halloween” and with other films like “Boiling Point”, will write the script for the new film, which will be shot in English but dubbed into other languages, in particular Arabic.

Moustapha Akkad died with more than 60 other people when bombers attacked three hotels in Amman, Jordan in 2005.

“Azl” explained in the hadith:Â

We went out with Allah’s Messenger (may peace be upon him) on the expedition to the Bi’l-Mustaliq and took captive some excellent Arab women; and we desired them, for we were suffering from the absence of our wives, (but at the same time) we also desired ransom for them. So we decided to have sexual intercourse with them but by observing azl (withdrawing the male sexual organ before emission of semen to avoid conception). But we said: We are doing an act whereas Allah’s Messenger is amongst us; why not ask him? So we asked Allah’s Messenger (may peace be upon him), and he said: It does not matter if you do not do it, for every soul that is to be born up to the Day of Resurrection will be born.[19]

According to the executive producer’s reasoning for making the movie — “to bridge the gap of understanding between Muslims and non-Muslims” — one can’t help but conclude the latter.

A remake of The Message, a movie about the life of the Prophet Mohammed, is to be filmed, its producers have said.Â

“The MessengerÂ of Peace“, to be shot around the holy cities of Mecca and Medina, was originally a 1977 Hollywood film made by Moustapha Akkad and starring Anthony Quinn.Â

It is often applauded by Muslims asÂ an example of how commercial Western cinema can respect Islam.

Producer Oscar Zoghbi, who worked on the original, said: “We have only the utmost respect for Akkad’s work but technology in cinema has advanced since the 1970s and this latest project will employ modern film techniques in its renewal of the first film’s core messages.”

“Now more than ever it has become important to bridge the gap of understanding between Muslims and non-Muslims.”

Clearly, then, this will be a movie totally based on the primary sources of Muhammad’s life, such as the hadiths and the sira of Ibn Ishaq. Wonder if the anecdote of Muhammad sending assassins to kill the aged Umm Kirfa (by tying her legs to two camels and driving them in separate directions) will be depicted?

“It is telling that only one great historical film has ever been made about Islam, a religion with 1.5 billion followers, whereas Christianity has been the subject of over 30.”

Yes, very telling: producers are terrified of having a fatwa issued against them.

The film’s scriptwriter Ramsey Thomas, said: “In the 21st century there is a real need for a film that emotionally engages audiences on the journey that led to the birth of Islam.”Â

In the original Message, Mohammed was not seen or heard. Instead Syrian-born director Akkad signified the Prophet’s presence with light organ music and occasionally framed the film from the prophet’s point of view.

Two versions of the film were shot – one in Arabic and one in English. The remake will be only the second English-language film of its kind ever made.

Akkad, who was the executive producer behind Hollywood’s Halloween horror films, was killed in a suicide bomb attack on a luxury hotel in Jordan in 2005.

Portrayals of Mohammed have sparked anger in recent years – Danish cartoons of him in 2006 triggered protests by Muslims in many countries.

Random House US recently cancelled the publication of The Jewel of Medina, a book about one of Mohammed’s wives, over fears it would offend Muslims.

It was also pulled in the UK when publisher Martin Rynja’s house was targeted in a firebomb attack.

Why again are film-makers not too enthusiastic about making a movie about Muhammad? 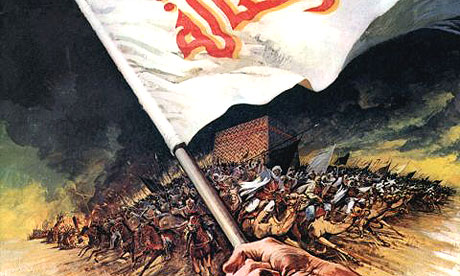 A poster for Message, the 1970s film about the prophet Muhammad

It was one of the most controversial films of the 1970s: an English-language biopic of the prophet Muhammad that was bankrolled by Libyan leader Muammar Gadafy and went on to trigger a fatal siege ahead of its US premiere.

Now The Message could be scheduled for a grand return to the fray courtesy of a remake.

Oscar Zoghbi, a producer who worked on the 1976 original, has announced that a new version is to be filmed around the holy cities of Mecca and Medina.

“We have only the utmost respect for [the original film] but technology in cinema has advanced since the 1970s,” Zoghbi said yesterday. “This latest project will employ modern film techniques in its renewal of the first film’s core messages.”

The new film, The Messenger of Peace, is being scripted by Ramzi Thomas, whose credits include Some Call it Loving, Halloween 5 and Appointment with Fear. Thomas said: “In the 21st century there is a real need for a film that emotionally engages audiences on the journey that led to the birth of Islam.”

A spokesman for the producers suggested to Reuters that the film’s funding and production schedule had yet to be finalised, promising that details would be announced “in due course”.

The Message prompted controversy in the US when it was rumoured that Anthony Quinn was starring as Muhammad. In March 1977, a dozen Muslims stormed three civic buildings in Washington, taking 149 people hostage and demanding the film be destroyed. The now notorious Hanafi Muslim Siege resulted in the deaths of a police officer and a radio reporter, while council member, and future mayor, Marion Barry was wounded by a shotgun pellet. The hostages were eventually released after a 39-hour standoff.

While the Qur’an does not explicitly forbid images of Muhammad there are some that discourage the visual representation of any living creature. The concern about depicting Muhammad is that it will lead to idolatry, which is forbidden in Islam.

Most Muslims follow convention and avoid images of the prophet and choosing an actor to play him could be problematic, so would filming in Mecca and Medina. Both cities are strictly off-limits for non-Muslims, so all the cast and crew would have to be Muslim, and the project would need approval from the Saudi government.

The 1976 film, starring Quinn as an Arab follower of Muhammad, was funded by Gadafy. The prophet is not seen or heard in the film. Instead the director, Syrian-born Moustapha Akkad, signified Muhammad’s presence with light organ music and occasionally framed the film from the prophet’s point of view as he observed the actions of his followers. Two versions of the picture were shot, one in Arabic and the other in English.

Speaking at the time, Akkad claimed he made The Message because he wanted to explain Islam to a western audience. “I think there was something personal, being Muslim myself who lived in the west, I felt that it was my obligation, my duty, to tell the truth about Islam,” he said.

Portraits of key Islamic figures have prompted protests around the world and the film is likely to renew debate about freedom of expression and self-censorship. Random House recently cancelled the publication of The Jewel of Medina, a book about one of Muhammad’s wives, after fears that it would offend Muslims. It was also pulled in the UK, when the publisher’s London home was firebombed.