More indications that “moderate” Morocco is not deserving of that epithet. “47 people convicted in Morocco terror trial,” by Hassan Alaoui for theÂ Associated Press,Â from JW

RABAT, Morocco (AP) â€” A Moroccan court convicted 47 people and sentenced them to up to 30 years in prison over a suicide bombing last year at aÂ Casablanca Internet cafe, a lawyer said Friday. 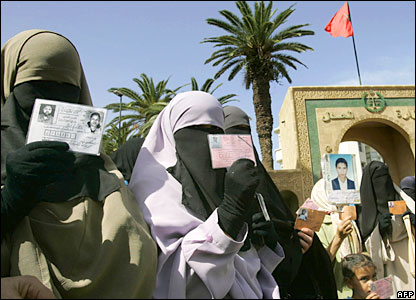 These females seem to be missing their husband

A criminal court in Sale, near the capital Rabat, gave the longest jail term of 30 years to Abdelkrim Ougard late Thursday, said lawyer Khalil Idrissi, who defended two other suspects on trial. Ougard was accused of forming a criminal gang with the aim of committing terrorist acts, making explosives, theft, forgery and failure to denounce terrorism. 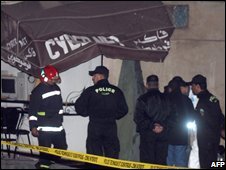 Gee, did this “criminal gang” subscribe to any particular ideology, any common worldview or framework — any Islam?

All those convicted were accused of links to a March 2007 suicide bombing at a Casablanca cybercafe. Abdelfettah Raydi, 23, detonated his charge after the cafe’s ownerÂ caught him surfing an Islamist Web site.Â

After the 2007 bombing, a police investigation turned up an alleged plot involving dozens of suspects to attack Casablanca’s port and police stations and tourist sites around Morocco, a moderate Muslim nation and popular tourist destination.

Youssef Khouidri, who was with Raydi at the time of the cybercafe bombing but dropped his bombs and fled, was sentenced to 15 years in prison. He and two of the others convicted were minors at the time of the explosion, the state news agency MAP said.

Twelve others were given six to 15 years, and four people were acquitted, lawyer Idrissi said. Idrissi said most of the sentences were overly harsh and based on flimsy evidence.

Half a dozen terrorism cells have been dismantled recently in Morocco, a strong ally of the United States in its war against terrorism.

This North African country of 33 million has also seen a rise of political and radical Islam in recent years. Suicide bombings in Casablanca in 2003 killed 45 people, and about 1,000 suspected Islamic militants are behind bars, either awaiting trial or sentenced on terrorism charges.

Another major Moroccan terrorist trial opened Thursday in the same court in Sale, involving a Belgian of Moroccan descent,Â Abdelkader Belliraj, accused of running a cell of 36 people and ordering the murder of a Muslim moderate leader killed in Brussels in the 1980s. The proceedings were immediately adjourned until Nov. 14.

This is especially the case in prisons around Casablanca, where the majority of al-Qaida insurgents have been held, the Med Basin Newsline reported Tuesday, citing the city’s Okasha prison, where al-Qaida-aligned inmates were reported to have taken over an entire ward.

Sources told the news agency that opponents there were intimidated or assaulted until they were transferred or accepted al-Qaida’s rule, which includes strict adherence to Sharia law. Some who have opposed the Islamic militants — most of whom were convicted for terrorism offenses — have been strangled to death, the sources said.

Med Basin Newsline said the al-Qaida inmates have also succeeded in intimidating prison authorities, who have allowed self-appointed investigators to search prison cells for liquor or other contraband that violates Islamic law.

Reporters Without Borders today voiced its dismay after Morocco’s communications ministry announced a ban on distribution of the international edition of the French weekly L’Express for an “attack on Islam”.Â

The 30 October to 5 November 2008 issue of l’Express had a cover page headlined “The shock: Jesus-Mohammed: Their journey, their message, their vision of the world”.

A ten-page article inside presented portraits of the founders of Christianity and Islam days ahead of a meeting in Rome of Muslim and Catholic dignitaries on the initiative of Pope Benoit XVI, to “promote dialogue” between the two monotheist religions.

“It is unfortunate that the communications ministry has on[c]e again chosen to resort to censorship to have a newspaper banned which was only bringing elements to the debate on an issue in the news that is of major interest to its Moroccan readers”, the worldwide press freedom organisation said.

“This decision is all the more surprising since the Moroccan authorities never stop describing the kingdom as an historic place of dialogue and coexistence between cultures and religions”.

That may be, but it still is, after all, the western most appendage of Dar al-Islam, where this sort of thing is beyond hackneyed.

“It is still more unfortunate that Algiers and Tunis decided to follow in Morocco’s footsteps” it added, wondering “if the kingdom is in the process of becoming an example for the repression of press freedom in the region.”[…]

No, such “sensitivity” and censorship is hardly a product of Morroco’s example; rather, it is endemic to the Islamic world.

Morocco was ranked 122nd out of 173 countries in Reporters Without Borders’ world press freedom index, released on 22 October 2008.

Take a wild guess what the predominant religion of countries ranking 123-173 is? Coincidence, or has Morroco simply corrupted them too?