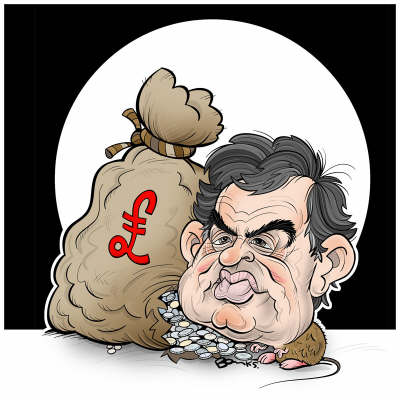 * Gordon had to prove that he is Muslim-friendly by visiting Ex Gitmo terrorists in their luxurious Saudi Â “de-radicalization facility”:Â Britain’s Brown meets Saudi terroristÂ suspectsÂ and this might have something to do with it as well:Â Application for London mega-mosque can go aheadÂ

* Great idea! Why didn’t anyone think of this before? But more likely than anything he will come back empty handed. Because Infidels must pay the jiziyah “with willing submission”, that’s what the immutable Koran says. Gordon Brownnose hasn’t got the message yet.

* Â Gordon even went so far asÂ to promiseÂ “business leaders in the Gulf that they would have a say in any future new world economic order.” Who in the f*kc is Gordon Brown to be making pledges on behalf of the whole Western world that Saudi Arabia will have a say in sculpting the new world financial order?/ed

The worst financial crisis in 80 years, started when a U.S. housing market boom turned sour, has raised fears of recession, which one bank official said would spread across the globe hurting even fast-growing economies in Asia and South America.

China was the latest country to fear it might be hit by the downturn, saying it must maintain a fast pace of growth or risk heightening “factors damaging social stability.”

Governments have cut interest rates, propped up banks and stepped up state spending to try to spur their economies, but some countries have been forced to turn to the International Monetary Fund (IMF) and other global lenders for help.

Brown urged countries with large financial resources, such as oil-producing Gulf states, to contribute to a new International Monetary Fund facility to help vulnerable economies and said he expected Saudi Arabia to contribute — after some time.

“The Saudis, I think, will contribute so we can have a bigger fund worldwide,” Brown told reporters in the Saudi capital, Riyadh, on a tour of the Gulf to seek investment, help on oil prices and funds for the IMF.

“The oil producing countries, who have generated over $1 trillion from higher oil prices in recent years, are in a position to contribute.”

He next heads to the gas and oil-producing Gulf Arab state of Qatar. Earlier in Kuwait, the finance minister said the government would base any decision to support international markets on potential returns and investment opportunities.

The IMF, which had $201 billion in loanable funds as of August 28, has offered money to Iceland, Ukraine, Hungary and Belarus to help their economies against the crisis, and several other countries are in talks to secure funding.

Officials have said that funds could run very low if many more countries requested help.

The British leader said cooperation on getting the world economy through the crisis could create a new global order — “fairer, more stable and offering greater prosperity for all.”

He will meet other world leaders at a summit in Washington on November 15 to press for reform of the financial system.

The president of oil producing group OPEC, Chakib Khelil, said its members had no choice but to implement agreed output cuts if they wanted a stable oil price between $70-90 a barrel.

Asked what effect Brown’s visit could have on OPEC’s plan to stabilize prices, Khelil said: “Everything depends on the impact on the decision of Saudi Arabia … Therefore, if it slows the cut, or does not do it, then of course there will be an impact on the oil price.”

The Organization of the Petroleum Exporting Countries (OPEC) decided at a meeting in Vienna on October 24 to reduce production by 1.5 million barrels per day or about 5 percent from November 1.

The crisis has struck countries around the world, with Sri Lanka becoming the latest to receive an IMF warning that its growth was at risk.

He said the theory of a decoupling of fast growing countries in Asia and South America had turned out to be an “unfulfilled hope.”

China also said it feared a downturn in its export markets could hurt the economy.

“We must be crystal-clear that without a certain pace of economic growth, there will be difficulties with employment, fiscal revenues and social development … and factors damaging social stability will grow,” Premier Wen Jiabao wrote in the Communist Party’s ideological journal.

China cut interest rates on Wednesday for the third time in six weeks to spur the world’s fourth-largest economy.

In India — like China, a magnet for foreign investment in recent years — the central bank cut its main lending rate on Saturday for the second time in as many weeks to ease a cash squeeze and spur economic growth.

Governments have pledged about $4 trillion to support banks and restart money markets to try to stem the crisis set off by the bursting of a U.S. housing market bubble.

In Ireland, a senior HBOS banker said the country would need to recapitalize its banks in the “next number of months” because exposure to the falling property market will undermine their capital bases.

“The government is in denial but they are going to have to recapitalize the Irish banking sector,” said Mark Duffy, chief executive of Bank of Scotland, part of the HBOS group, which is being taken over by rival Lloyds TSB.

The crisis has also stalled privatizations.

After Germany said its planned flotation of rail operator Deutsche Bahn was off the agenda, a senior adviser to French President Nicolas Sarkozy said plans to sell off parts of post office operator La Poste would not go ahead for the moment.

(Reporting by Reuters bureaux around the world; Writing by Elizabeth Piper; Editing by Janet McBride)

Now that you’ve seen the error of your ways, how about joining the “new world economic order,” hmm?

He also just got done imploring the Saudis for financial aid, going so far asÂ to promiseÂ “business leaders in the Gulf that they would have a say in any future new world economic order.”

Saudi officials claim their efforts at rehabilitating extremists usingÂ months of reasoned argument against radical IslamÂ have a success rate of 80 to 90 percent: Only 35 people out of 3,200 in the program have been re-arrested for security offenses…

“Radical Islam” is practically synonymous with Wahhabism, the Saudi endorsed “version” of Islam, which children are taught from the moment they can read. This assertion totally contradicts itself, but don’t expect Brown to notice, or care.

Brown spoke with six men at the facility near the capital Riyadh and shook hands with two inmates who had each spent six years at Guantanamo Bay as a result of their al-Qaida links.Â

Saudi officials claim their efforts at rehabilitating extremists using months of reasoned argument against radical Islam have a success rate of 80 to 90 percent: Only 35 people out of 3,200 in the program have been re-arrested for security offenses.

When the men are released, they are given jobs and other support.

An official at the center, Dr. Abdel Rahman Hadlaq, said it was a key step to break the inmates’ links with radicals.

Brown spoke with six men at the facility near the capital Riyadh and shook hands with two inmates who had each spent six years at Guantanamo Bay as a result of their al-Qaida links.

Jonathan Evans, head of Britain’s domestic spy agency MI5, has said his officers are monitoring around 2,000 potential terrorists in the U.K., who are planning around 30 potential attacks at any given time.

The Saudi innates are kept in secure compounds with facilities such as gyms and swimming pools while imams give them lessons on moderate Islam.

The Riyadh facility is staffed by 100 clerics, 50 social workers and 30 other specialists.

Juma al-Dossary, 35, who has been at the facility for six months after six years at Guantanamo, said “they have convinced us logically.”

Al-Dossary said the had been in the “wrong place at the wrong time” and fell in with extremists. He is now married, about to become a father and planning a career in computing.

None of the six men Brown met have been charged or convicted of any offense.

Awards were given to people in recognition of their outstanding contribution to society. Madeleine Bunting, a Guardian columnist and Associate Editor, was awarded the ‘Friends of Islam Media Award’ this year.

And that’s not all:

Britain’s Labor MPÂ Stephen TimmsÂ Thanks Muslims for Bringing Islam Into UK, “We Need Decent Values Which the Muslim Community Shows in Abundance”…..

By Dr. Mozammel Haque Saudi Gazette
LONDON â€“ Britain’s Labor MP Stephen Timms praised Muslims for bringing back faith into Britain.
“When parts of our society are so deeply secular, so hostile to the acknowledgment of God, I want today to express appreciation and thanks to Muslims in Britain for insisting on faith,” said the Minister for Business and Labour MP for East Ham at the Global Peace and Unity Event organized by Islam Channel last week.Â
“(I want to thank Muslims) for helping put faith back today at the centre of Britain’s national life and debate in a way that it wasn’t for a very long time.Â
“You are part of the reason for that change, and I warmly welcome it,” he added.
He urged Muslims to take up politics.Â
“We need more people taking up politics from the starting point of faith. Because faith is the source of decent values (like) honesty, commitment to family, generosity, support for peace,” Timms said. “(We need such) decent values which the Muslim community shows in abundance.”
“Those are the very values which we need in our politics, and which this event can help us to promote,” he added.
In an earlier BBC program, Stephen Timms visited two mosques, two churches, a Hindu temple and a Sikh Gurudwara and highlighted the positive contribution the faith groups were making towards cohesion.
The GPU event 2008 was supported by major Islamic organizations including the Muslim Council of Britain (MCB) and British Muslim Forum (BMF). The event attracted more than 60,000 visitors last year with addresses from a number of prominent Islamic scholars.
Awards were given to people in recognition of their outstanding contribution to society. Madeleine Bunting, a Guardian columnist and Associate Editor, was awarded the ‘Friends of Islam Media Award’ this year.