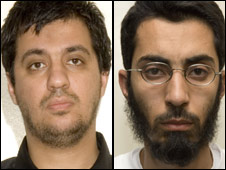 Dr Abdulla and Dr Asha from the “dumber than dirt” department?

Car bombs in London and Glasgow were meant to scare public but not maim or kill, says Bilal Abdulla

Update: the Lebanese who tried to blow up the trains in Germany with suitcase-bombs use the same BS defence. Just saw it in the news, unfortunatley couldn’t get a link yet…

For the last week or so CNN and far left publications like the Guardian are drumming the message into unsuspecting lemmings that the bombers from Glasgow or London did it because they had justifiable grievances. Do not believe them; these A-soles are in bed with Islamic terrorists because they believe they can use the sons of Allah to make your world into a Socialist utopia.

An NHS doctor accused of the Glasgow airport attack today admitted planning to set cars on fire to give Britain a “taste of fear”.

Bilal Abdulla, 29, an Iraqi, said he had wanted the incendiary devices to throw the spotlight back on the devastating effect of war on his homeland.

He branded the British government “democratically elected murderers” and said he wanted Muslims to escape oppression and leave Britain.

But Abdulla told Woolwich crown court in London that he knew the “horror and terror” of the July 7 attacks and had not wanted to injure or kill anyone.

Going into the witness box for the second day, Abdulla said he wanted to “bring the Iraq issue to life”.

“I wanted the public to taste what is going on, for them to have a taste of what the decisions of their democratically elected murderers did to my people.

“We intended to bring a device that would give just a taste, the taste of fear. It would look professional, it was dangerous, but in reality it was not.

“In reality it was not a dangerous device. It was a device that would not kill people.”

Abdulla admitted researching and preparing the devices in Houston, near Glasgow, with his friend Kafeel Ahmed, 28, an Indian engineering student.

He said they decided to act as he prepared to leave Britain and return to Jordan after his family fled there from the fighting in Iraq. “I had a major sense of guilt, living in safety while all my people are massacred,” he said.

Abdulla said Ahmed, who died after the pair drove a burning Jeep into the main terminal building of Glasgow airport, was in London on July 7 2005.

“I felt the horror and terror of 7/7 as you people felt it. I felt exactly the same as you,” Abdulla said.

“One of my friends was in London. The opinion of all of us was that the killing of innocent people is an atrocity by all the word means.

“It is not accepted by any religion or any law and that was the opinion of all of us.”

Abdulla is accused of attempting to murder hundreds of people by leaving car bombs detonated by mobile phones outside a West End nightclub in June 2007.

When the gas canister and petrol devices did not go off, he joined a suicide attack on Glasgow airport the next day, the prosecution has said.

Abdulla said he was responsible for gathering cash and finding a base while Ahmed designed the devices.

The junior doctor said he “did not have a clue” about how the devices would be made and saw Ahmed as an expert. He admitted translating an Arabic internet document, The Military Use of Electronics, for his friend.

Abdulla said: “The plan was simple. Kafeel would use cars that would have petrol canisters at the back of the car, the boot.

“We would use mobile phones to ignite the petrol and the cars would burn.

“Kafeel said he would give it touches that would show there was an element of professionalism in this job.

“The media would take up these devices, [making them into] a big thing.”

Abdulla is on trial with a second man, Mohammed Asha, 28, who is accused of conspiracy to murder cause explosions. They have pleaded not guilt