* From Carl in Jerusalem 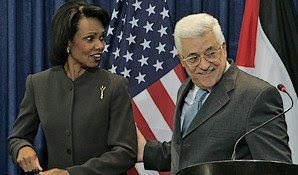 US Secretary of State Condoleeeezzza Clueless said on Sunday night that the reason there is no ‘peace agreement’ between Israel and the ‘Palestinians’ is the ‘political turmoil‘ in Israel.

“Even though there was not an agreement by the end of the year, it is really largely because of the political situation in Israel,” Rice told reporters.

They don’t call her Condi Clueless for nothing.

One of the mostÂ repulsive douchebagsÂ on the left is leaving the one show where anyone saw or heard him.

Once again, the UN appeals to yourÂ naivetÃ©’ to support the worst scum of the earth…

KuntarÂ was imprisoned in 1979 after he was convicted of one of the grisliest attacks in Israeli history – killing a man in front of his four-year-old daughter, and then killing the girl herself by crushing her skull.Â

4 thoughts on “They don't call her Condi Clueless for nothing…”