It’s a safe bet, dear reader, that the title of this column has caused you to either (a) roll your eyes and wonder,Â What century do you think we’re living in?Â or (b) scratch your head and ask,Yes, why don’t we?Â Wherever you come down, the question defines a fault line in the civilized world’s view about the latest encroachment of barbarism.

Year-to-date, Somalia-based pirates have attacked more than 90 ships, seized more than 35, and currently hold 17. Some 280 crew members are being held hostage, and two have been killed. Billions of dollars worth of cargo have been seized; millions have been paid in ransom. A multinational naval force has attempted to secure a corridor in the Gulf of Aden, through which 12% of the total volume of seaborne oil passes, and U.S., British and Indian naval ships have engaged the pirates by force. Yet the number of attacks keeps rising.

Why? The view of senior U.S. military officials seems to be, in effect, that there is no controlling legal authority. Title 18, Chapter 81 of the United States Code establishes a sentence of life in prison for foreigners captured in the act of piracy. But, crucially, the law is only enforceable against pirates who attack U.S.-flagged vessels, of which today there are few.

What about international law? Article 110 of the U.N.’s Law of the Sea Convention — ratified by most nations, but not by the U.S. — enjoins naval ships from simply firing on suspected pirates. Instead, they are required first to send over a boarding party to inquire of the pirates whether they are, in fact, pirates. A recent U.N. Security Council resolution allows foreign navies to pursue pirates into Somali waters — provided Somalia’s tottering government agrees — but the resolution expires next week. As for the idea of laying waste, Stephen Decatur-like, to the pirate’s prospering capital port city of Eyl, this too would require U.N. authorization. Yesterday, a shippers’ organization asked NATO to blockade the Somali coast. NATO promptly declined.

Then there is the problem of what to do with captured pirates. No international body similar to the old Admiralty Courts is currently empowered to try pirates and imprison them. The British foreign office recently produced a legal opinion warning Royal Navy ships not to take pirates captive, lest they seek asylum in the U.K. or otherwise face repatriation in jurisdictions where they might be dealt with harshly, in violation of the British Human Rights Act.

In March 2006, the U.S. Navy took 11 pirates prisoner, six of whom were injured. Not wanting to set a precedent for trying pirates in U.S. courts, the State Department turned to Kenya to do the job. The injured spent weeks aboard the USS Nassau, enjoying First World medical care.

All this legal exquisiteness stands in contrast to what was once a more robust attitude. Pirates, said Cicero, wereÂ hostis humani generisÂ — enemies of the human race — to be dealt with accordingly by their captors. Tellingly, Cicero’s notion of piracy vanished in the Middle Ages; its recovery traces the recovery of the West itself.

By the 18th century, pirates knew exactly where they stood in relation to the law. A legal dictionary of the day spelled it out: “A piracy attempted on the Ocean, if the Pirates are overcome, the Takers may immediately inflict a Punishment by hanging them up at the Main-yard End; though this is understood where no legal judgment may be obtained.”

Severe as the penalty may now seem (albeit necessary, since captured pirates were too dangerous to keep aboard on lengthy sea voyages), it succeeded in mostly eliminating piracy by the late 19th century — a civilizational achievement no less great than the elimination of smallpox a century later.

Today, by contrast, a Navy captain who takes captured pirates aboard his state-of-the-art warship will have a brig in which to keep them securely detained, and instantaneous communications through which he can obtain higher guidance and observe the rule of law.

Yet what ought to be a triumph for both justice and security has turned out closer to the opposite. Instead of greater security, we get the deteriorating situation described above. And in pursuit of a better form of justice — chiefly defined nowadays as keeping a clear conscience — we get (at best) a Kenyan jail. “We’re humane warriors,” says one U.S. Navy officer. “When the pirates put down their RPGs and raise their hands, we take them alive. And that’s a lot tougher than taking bodies.”

Piracy, of course, is hardly the only form of barbarism at work today: There are the suicide bombers on Israeli buses, the stonings of Iranian women, and so on. But piracy is certainly the most primordial of them, and our collective inability to deal with it says much about how far we’ve regressed in the pursuit of what is mistakenly thought of as a more humane policy. A society that erases the memory of how it overcame barbarism in the past inevitably loses sight of the meaning of civilization, and the means of sustaining it. 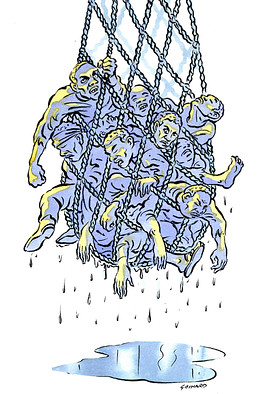 5 thoughts on “Why Don't We Hang Pirates Anymore?”