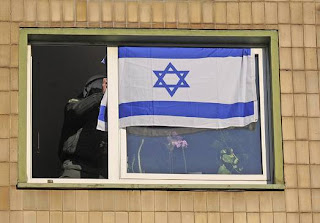 Today, 10.000 people demonstrated against Israel here in my hometown Duisburg (Germany) and to express their solidarity with Hamas. So, my girlfriend and me put two Israel flags out of the windows of our flat in the 3rd floor. During the demonstration which went through our street the police broke into our flat and removed the flag of Israel. The statement of the police was to de-escalate the situation, because many youth demonstrators were on the brink of breaking into our apartment house. Before this they threw snowballs, knifes and stones against our windows and the complete building. We both were standing on the other side of the street and were shocked by seeing a police officer standing in our bedroom and opening the window to get the flag. The picture illustrates this situation. The police acquiesced in the demands of the mob.

And as you can see from the video, the mob applauded, cheered, and shouted “Allahu akbar” when the flag disappeared.

Video above fromÂ Jewish OdysseusÂ (thanks to Phil).

* From Pamela: The Nazi-Muslim connection, Hitler & the Mufti

Or if you just want live nazis, you can watch theÂ Gaza livecam Deniece sent onto me.

The directÂ URL for the livecam: