Thousands of Maldivians rallied together to condemn Israel’s attacks on Gaza in a show of solidarity for their fellow Muslims on Friday, with one group burning an Israeli flag and a picture of the Israeli foreign minister.
**** 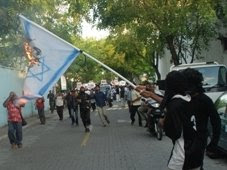 Protesters called for a boycott of all Israeli and American products and urged the government to denounce the attacks at the rally, which was held at the artificial beach in Male’.Â

Demonstrators carried Palestinian flags and placards reading, “Where are the guardians of human rights?”, “Stop the killings” and “Free Gaza and the Palestinians”.

Remember: “human rights” for Muslims means “Muslims Only”- because unbelievers are the vilest of creatures they don’t deserve human rights…

(note the gun and Koran)

We are doing these people a favor: they love death. They want virgins. Lets give ’em what they want…

THE mastermind of Hamas’s long-range rocket attacks on Israel was killed yesterday in an airstrike, according to Israeli military sources.Â Amir Mansi, an engineer who commanded cells responsible for firing Grad rockets supplied by Iran, died after coming under attack from a helicopter.

The Israeli army said he had been trying to fire mortar shells at their troops when he was targeted. Mansi headed the Hamas military wing’s Gaza Strip rocket division and “played a big role in Grad rocket attacks on Israeli communities”, a military spokesman said.

7 Things The Mainstream Media Isn’t Telling You About Gaza 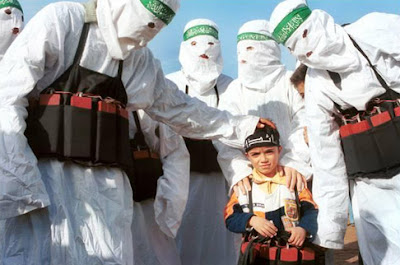 Hamas’ Damascus leader, Khaled Meshaal, singlehandedly blew up peace talks between Hamas and Israel, according to military sources reported in Debka Files today. Reportedly Hamas was near a breaking point when Meshaal pulled his stunt.

Meshaal went on Damascus TV and declared Hamas must fight on until Israel ends its military offensive, withdraws from the Gaza Strip and opens the enclave’s crossings. Egypt too must open the Rafah gate. Hamas would never accept any restrictions on its armament â€“ a hint at Israel-Egyptian plans to block the Philadelphi route â€“ and would treat international monitors as an “occupation” force.
Meshaal demanded an immediate Arab summmit which Egypt and Saudi Arabia have firmly refused. Israeli losses were much higher than admitted, he said, adding that Saturday, Hamas rockets had hit Israel’s Palmachim missile and satellite base more than 50 miles away.

That’s one thing you probably didn’t hear in the MSM.Â

Here’s some more from the Debka report:

1. Desertions are spreading among the 18,000 rank and file and police officers, who were left out in the open to shoot missiles and rockets and fight off Israeli attacks, while Hamas leaders and commanders stayed under cover in bunkers.
Seeing the fading resistance, Hamas’ Grad rocket specialist, Ami Mansi, emerged from hiding Saturday and took over a mortar position against Israel troops. Quickly identified, he was killed by an Israeli helicopter missile with two aides. That night, Al Qaeda’s Gaza commander, Ghassen Maqdad, was killed in Khan Younes in the south.
2. The Hamas hard core of fighters, estimated at 3,500 before the war, has suffered painful losses – at least 550 men, including high profile operatives. Israeli forces continued to press forward Saturday, disabling Hamas’ bunker hideouts, booby-trapped tunnels and buried passages designed to serve as escape hatches and the abduction of Israeli soldiers. Their missile production workshops have been destroyed but Hamas is not finished yet, say Israeli military sources.
Saturday, 12 Israeli soldiers suffered minor injuries.
3. Signaling an intense push ahead, Israeli aircraft dropped leaflets over the Gaza Strip Saturday with this warning: “The IDF will soon raise the level of attacks on tunnels, weapons caches and terrorists. For your own safety and that of your families, keep your distance from places where terrorists are hiding, active and store weapons.”
4. The commander of Hamas’ military wing, Muhammad Jabry, has lost his credibility after failing to follow through on his vow that Israeli troops would never set foot in Gaza City. Our military sources disclose that as of Saturday, the Gazan capital is virtually defenseless after desertions left Hamas bunkers, defensive tunnels and anti-tank positions unmanned.
Hamas tacticians have decided to deploy their dwindling manpower to maintain the missile and rocket-fire, which began dipping from 40 Thursday, to 30 Friday and 20 Saturday.
5. The southern town of Rafah is in the same dire straits as Gaza City.
6. Gaza’s population is increasingly estranged from its invisible Hamas rulers, accusing them of fighting their battles to the last civilian. Hamas has planted booby-traps, weapons caches and firing positions in private homes, so that civilians take the brunt of explosions and counter-attacks.

Which all goes a long way towards explaining why despite all the bold talk in the media, the Gaza-based Hamas was ready to deal with the Israelis.Â

Debka also speculates about the perception of a widening rift between Hamas’ Gaza HQ and the Damascus Branch Office. Supposedly Damascus is getting direction and funding from Iran, who announced today that they were keeping volunteers home and staying out of the Gaza conflict. So could it be that Iran engineered this and is now letting the Palestinians in Gaza pay the price for it?