Barack Obama has posed as a champion of human rights, a foe of tyrants and a staunch defender of Israel. But much that Obama says is not matched so far by what he actually does. And so it is here, with his not-denied slating of Charles “Chas” Freeman (right), the former US ambassador to Saudi Arabia, as his gatekeeper to US intelligence.

Either way, if those complaining loudest about politicized intelligence have indeed placedÂ a China-coddling Israel basherÂ in charge of drafting the most important analyses prepared by the U.S. government, it is quite a spectacle. The problem is not that Mr. Freeman will shade National Intelligence Estimates to suit the administration’s political views. The far more serious danger is that he will steer them to reflect his own outlandish perspectives and prejudices.

Judge for yourself from the man’s own words.

I find the dominant view in China about this very plausible, i.e. that the truly unforgivable mistake of the Chinese authorities was the failure to intervene on a timely basis to nip the demonstrations in the bud, rather thanâ€”as would have been both wise and efficaciousâ€”to intervene with force when all other measures had failed to restore domestic tranquility to Beijing and other major urban centers in China. In this optic, the Politburo’s response to the mob scene at “Tian’anmen” stands as a monument to overly cautious behavior on the part of the leadership, not as an example of rash action.

American identification with Israeli policy has also become total. Those in the region and beyond it who detest Israeli behavior, which is to say almost everyone, now naturally extend their loathing to Americans. This has had the effect of universalizing anti-Americanism, legitimizing radical Islamism, and gaining Iran a foothold among Sunni as well as Shiite Arabs. For its part, Israel no longer even pretends to seek peace with the Palestinians; it strives instead to pacify them. Palestinian retaliation against this policy is as likely to be directed against Israel’s American backers as against Israel itself. Under the circumstances, such retaliation â€“ whatever form it takes â€“ will have the support or at least the sympathy of most people in the region and many outside it. This makes the long-term escalation of terrorism against the United States a certainty, not a matter of conjecture.

The fact is, of course, that Israeli occupation and settlement of Arab lands is inherently violent. Occupations are acts of violence. The dispossession of people from their land is an act of violence. Preventing people from coming to and going from their own country is an act of violence. And as long as such Israeli violence against Palestinians continues, it is utterly unrealistic to expect that Palestinians will stand down from violent resistanceÂ and retaliation against Israelis.

Freeman onÂ the cause of Middle East terrorism:

And the problem of terrorism that now bedevils us has its origins in one region the Middle East. To end this terrorism we must address the issues in the region that give rise to it. Principal among these is the brutal oppression of the Palestinians by an Israeli occupationÂ that is about to mark its fortieth anniversary and shows no sign of ending. 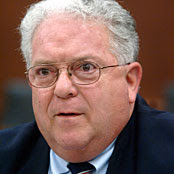 While President Obama speaks of helping the people of Israel “search for credible partners with whom they can make peace,” Mr. Freeman believes, as he said in a 2007 address to the Washington Institute of Foreign Affairs, that “Israel no longer even pretends to seek peace with the Palestinians; it strives instead to pacify them.” The primary reason America confronts a terrorism problem today, he continued, is “the brutal oppression of the Palestinians by an Israeli occupation that is about to mark its fortieth anniversary and shows no sign of ending.”

And unfortunately, this appointment is not likely to get a lot of scrutiny.

We have already seen a string of poorly vetted appointments from the Obama White House, like those of Tom Daschle and Bill Richardson, that after public scrutiny were tossed under the bus. The chairmanship of the National Intelligence Council differs from those cases, for it does not require Senate confirmation. If someone with such extreme views has been appointed to such a sensitive position, is this a reflection of Mr. Obama’s true predilections, or is it proof positive that the Obama White House has never gotten around to vetting its own vetters?

Either way, if those complaining loudest about politicized intelligence have indeed placed a China-coddling Israel basher in charge of drafting the most important analyses prepared by the U.S. government, it is quite a spectacle. The problem is not that Mr. Freeman will shade National Intelligence Estimates to suit the administration’s political views. The far more serious danger is that he will steer them to reflect his own outlandish perspectives and prejudices.

Here is the most stunning prospective appointment of the Obama administration as yet. Not stunning as in “spectacular” or “distinguished” but stunning as in bigoted and completely out of synch with the deepest convictions of the American people. What’s more, Charles “Chas” Freeman is a bought man, having been ambassador to Saudi Arabia and then having supped at its tables for almost two decades, supped quite literally, and supped also at home, courtesy of Prince Bandar, confidante of the Bushes who as everybody knows became extremely wealthy through the intimacy with the royal house, a story that has not been done adequately ever.

I suspect that Prince Bandar has warmer feelings for Chas Freeman – an appointee of a Democratic President – than his feelings for George W. Bush (43).

Chas Freeman is actually a new psychological type for a Democratic administration. He has never displayed a liberal instinct and wants the United States to kow-tow to authoritarians and tyrants, in some measure just because they may seem able to keep the streets quiet.Â And frankly, Chas brings a bitter rancor to how he looks at Israel. No Arab country and no Arab movement–basically including Hezbollah and Hamas–poses a challenge to the kind of world order we Americans want to see. He is now very big on Hamas as the key to bringing peace to Gaza, when in fact it is the key to uproar and bloodletting, not just against Israel but against the Palestinian Authority that is the only group of Palestinians that has even given lip-service (and, to be fair, a bit more) to a settlement with Israel.

But Freeman’s real offense (and the president’s if he were to appoint him) is that he has questioned the loyalty and patriotism of not only Zionists and other friends of Israel, the great swath of American Jews and their Christian countrymen, who believed that the protection of Zion is at the core of our religious and secular history, from the Pilgrim fathers through Harry Truman and John F. Kennedy. And how has he offended this tradition? By publishing and peddling the unabridged John Mearsheimer and Stephen Walt book, The Israel Lobby and U.S. Foreign Policy, with panegyric and hysteria. If Freeman believes that this book is the truth he can’t be trusted by anyone, least of all Barack Obama.Â I can’t believe that Obama wants to appoint someone who is quintessentially an insult to the patriotism of some many of his supporters, me included.

I’d be curious to hear why Peretz thinks Chas Freeman is any different fromSamantha PowerÂ orÂ Robert Malley, both of whom have also expressed extreme anti-Israel views.

Those of us who place Israel at the top of our priorities tried to warn those of you who still care about Israel that Barack Hussein Obama would sell the Jewish State down the river for a pair of shoes. We cried over and over again to look at the foreign policy advisers with whom Obama was surrounding himself.