Last Friday, in anticipation of the swearing in of the new Netanyahu government, EU foreign ministers met in Prague and discussed how they would stick it to the Jews.

Terror and the UNRWA

The UN-Islamist Assault on Freedom of Religion

According to media reports, the assembled ministers and diplomats decided that they will freeze the process of upgrading EU relations with Israel until Prime Minister Binyamin Netanyahu explicitly commits his government to establishing a Palestinian state and accepts that the only legitimate policy an Israeli government can have is the so-called “two-state solution.”

Czech Foreign Minister Karel Schwarzenberg, whose country holds the rotating EU presidency, reportedly summed up the new approach saying, “There won’t be any progress in relations between Israel and the European Union until the Israeli government clarifies its stance on the creation of a Palestinian state.”

On an operational level, the assembled ministers and diplomats decided to cancel the Israel-EU summit now scheduled for late May until Israel has bowed to Europe’s demand.

Europe’s decision to launch a preemptive strike against the Netanyahu government even before it was sworn into office on Tuesday came against the backdrop of its growing enthusiasm for opening formal ties with Hamas. AsÂ The Jerusalem PostÂ reported on Thursday, Europe’s diplomatic courtship of the Iranian-sponsored genocidal terror group is being spearheaded by Sweden and Switzerland. But they are far from alone.

Britain’s Foreign Minister David Miliband has in recent weeks openly called for recognizing Hamas. France is reportedly using its involvement in the attempts to secure the release of Israeli hostage Gilad Schalit from his Hamas-controlled captors to advance its own bilateral ties to the jihadist group. At last Friday’s meeting, Belgian Foreign Minister Karel De Gucht reportedly also called for Europe to open ties with Hamas.

In its move to isolate Israel – and indeed to treat the only free country in the Middle East as if it is morally and politically inferior to Hamas – the EU reportedly believes that it is acting in concert with the Obama administration.

Since entering office, and increasingly in recent weeks, the Obama administration has been both directly and indirectly signaling that it will adopt a hostile stance toward Netanyahu and his government. Unnamed Democratic congressional and administration sources have been warning Israel through the media that the administration does not accept the Israeli voters’ right to set a new agenda for the incoming government that rejects the Olmert-Livni government’s subordination of Israel’s national interests to the establishment of a Palestinian state.

The administration itself has stated through both White House and State Department spokesmen that it is completely committed to the swift establishment of a Palestinian state – regardless of Israel’s position on the issue.

Other global policy-shapers have also weighed in. Former British prime minister and current Quartet Middle East mediator Tony Blair has been making daily statements warning of a breach with Israel if the Netanyahu government doesn’t fall in line. On Wednesday, for instance, Blair threatened, “There is no alternative to a two-state solution, except the one-state solution. And if there is a one-state solution, there’s going to be a big fight.”

The Palestinians are enjoying the ride. Last Saturday, Fatah negotiator Saeb Erekat published an op-ed in The Washington Post where he portrayed Netanyahu as more radical than Hamas, and demanded that the US show that it is a true “honest broker” by treating Israel and Palestinian terrorists as moral, political and strategic equals.

Fatah leader Mahmoud Abbas has also piled on, announcing that he will boycott the Netanyahu government until it falls into line.

Perhaps the most noteworthy aspect of the international hysteria over the Netanyahu government is its timing. The calls for Israel’s international isolation, the decision to treat Israel as a beyond-the-pale-pariah-nation far worse than Hamas, emerged even before the Netanyahu government was sworn into office. How did this foul state of affairs come about? Why is the Middle East’s only democracy being treated worse than North Korea, Iran, Syria, Sudan, Hamas and Hizbullah?

THE RESPONSIBILITY for this horrendous state of affairs belongs mainly with Netanyahu’s predecessors – former prime minister Ehud Olmert and opposition leader Tzipi Livni. During their tenures in office, Olmert and Livni effectively embraced Israel’s enemies’ view that unlike the PLO and even Hamas, Israel has no independent right to exist. Indeed, not only did they accept that view, they turned it into the official policy of the government.

Around the time that prime minister Ariel Sharon was felled by a stroke in January 2006, Olmert and Livni began asserting that Israel’s very legitimacy is dependent on the rapid establishment of a Palestinian state. For instance, in her speech at the Herzliya conference in January 2006, Livni stated outright that until and unless a Palestinian state is carved out of land currently controlled by Israel, the Jewish state cannot expect for the world to accept its right to exist. Olmert made this point explicitly in a series of media interviews in recent months.

Livni maintained her allegiance to the view that a Palestinian state is more legitimate than Israel when during coalition talks with Netanyahu she stipulated that like the EU and the PLO, she would only accept the legitimacy of the Netanyahu government, and so agree to serve in it, if it accepted the two-state paradigm.

Israel embarked on the road toward accepting the PLO’s position when it accepted the legitimacy of the PLO with the launch of the Oslo peace process in 1993. The first time Israel explicitly and formally accepted the establishment of a Palestinian state, however, came only in 2004, with the Sharon government’s qualified acceptance of the Middle East Quartet’s so-called road map plan for the establishment of a Palestinian state.

The innovation of the Olmert-Livni government was to discard this position. In November 2007, Olmert and Livni enthusiastically signed on to the Annapolis formula for Palestinian statehood, which itself was nothing more than a regurgitation of the PLO’s position. Then-US secretary of state Condoleezza Rice extolled the Annapolis formula specifically because it removed the requirement that the Palestinians dismantle all terror groups operating in their territory before receiving statehood. That is, she applauded the fact that at Annapolis, the goal of fostering peaceful coexistence between the Palestinians and Israel was supplanted by the establishment of a Palestinian state as the aim of the so-called peace process.

By adopting the so-called the Annapolis “two-state” platform then, the Olmert-Livni government accepted the PLO’s position that it is Israel, not the PLO and its sister terror groups, whose legitimacy is contingent on its behavior. It is not the PLO that needs to quit the terror business in order to be acceptable. Israel needs to accept the PLO – and for that matter Hamas – regardless of their behavior if it wishes for anyone to even consider recognizing it.

DUE TO the Olmert-Livni government’s unconditional acceptance of the PLO’s position, today conditional Israeli acceptance of the eventual establishment of a Palestinian state, along the lines of the Sharon government’s conditional acceptance of the road map, is no longer sufficient. Now, as Europe, the US and regional actors are all making clear, Israel must accept that its own right to exist is contingent on the establishment of a Palestinian state – regardless of its character or the identity of the Palestinian leadership. That is, if Israel doesn’t accept the legitimacy of a Hamas or Fatah-ruled Palestinian terror state in Judea, Samaria, Jerusalem and Gaza, then it has no right to exist.

This reality, of course, was made clear by the outcry that Foreign Minister Avigdor Lieberman’s official denunciation of the Annapolis formula on Wednesday induced. Lieberman, after all, did not say anything particularly anti-Palestinian. Indeed, he made clear that the Netanyahu government remains committed to the establishment of a Palestinian state.

What the outcry at Lieberman’s remarks – from both Livni and her domestic supporters, and the international community – makes clear is that it will be exceedingly difficult for the Netanyahu government to walk away from the anti-Israel positions adopted by its immediate predecessor. But it also shows how urgently those positions need to be rejected.

For the past 16 years, from Israel’s first acceptance of the PLO as a legitimate actor to Israel’s acceptance of the PLO’s position that it is the Jewish state rather than the Palestinian state whose legitimacy is conditional, Israel’s international position has become ever more tenuous as prospects for peace have become ever more remote. The Netanyahu government was elected to put an end to this disastrous trend. It is heartening to see that straight out of the starting gate, it is working to accomplish this essential task. 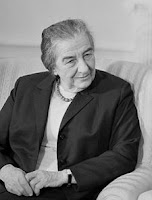 Finally, Bernard Lewis once told me a story about Golda Meir at Princeton. She did not give a speech. She just said, “Look, you know my views. You know my outlook on the world. I have been a public figure for a long time. Why don’t you just ask me some questions.”

So, during this session, someone said, “Why is it that the PLO belongs to UNESCO while Israel does not?” (Israel was forbidden to join, of course.) And Golda said, “Well, let’s see: ‘UNESCO’ stands for ‘United Nations Educational, Scientific, and Cultural Organization.’ Obviously, the Palestinians have more to contribute to education, science, and culture than we do.”

Sometimes, sarcasm is the most effective tool in the box.