* Â The FBI is wasting time and resources to spy on tea parties and returning veterans, all the while desperately pretending Â that Islamo-terror Â is an ‘overseas contingency operation” or a “men caused disaster” – and if you don’t look you can’t even see the 600 pound gorilla Â in the room:

Muslim outrage over demands to cooperate with law enforcement

Muslim groups are outraged and are calling Congressman King a bigot for daring to suggest that anything untoward might be happening in mosques in the United States. Never mindÂ this. AndÂ this. AndÂ this. And lots more besides. King, of course, is right on the money, but political experts said King (R-Seaford) was taking a risk by provoking fights with a minority group as he considers higher office in a diverse, Democratic state where the GOP usually wins by moving to the center.

In response to a Department of Homeland Security report about domestic right-wing extremism,Â King (R-Seaford) told MSNBC Friday that the department “has never put out a report talking about look out for mosques. Look out for Islamic terrorists in our country. Look out for the fact that very few Muslims come forward to cooperate with the police.”

King stood by his remarks in an interview Sunday and said: “We’re kidding ourselves by not addressing the issue.

“The fact is, the Muslim community does not cooperate with law enforcement,”Â said King,

CAIR rep to FBI: “Our mosques are off limits. Our Koran is off limits.”

In other words, despite incidents such asÂ this, andÂ this, andÂ this, and despiteÂ the fact that hatred and Islamic supremacism are taught in a number of mosques in the U.S., he wants law enforcement officials to turn a blind eye to the possibility of jihadist activity in mosques. And meanwhile, he also wants to take the Qur’an off the table — that is, he wants no investigation of the stated motives and goals of the jihad terrorists themselves. Apparently he would prefer that we remain in the dark about them.

Which side is he on again?

Desperately looking in all the wrong places:

WASHINGTON — The Federal Bureau of Investigation earlier this year launched a nationwide operation targeting white supremacists and “militia/sovereign-citizen extremist groups,” including a focus on veterans from Iraq and Afghanistan, according to memos sent from bureau headquarters to field offices.Â Â Â Â

The initiative, dubbed Operation Vigilant Eagle, was outlined in February, two months before a memo giving a similar warning was issued on April 7 by the Department of Homeland Security.

Disclosure of the DHS memo this week has sparked controversy among some conservatives and veterans groups. Appearing on television talk shows Thursday, Homeland Security Secretary Janet Napolitano defended the assessment, but apologized to veterans who saw it as an accusation.

“This is an assessment of things just to be wary of, not to infringe on constitutional rights, certainly not to malign our veterans,” she said on NBC’s Today Show.

The documents outlining Operation Vigilant Eagle cite a surge in activity by such groups. The memos say the FBI’s focus on veterans began as far back as December, during the final weeks of the Bush administration, when the bureau’s domestic counterterrorism division formed a special joint working group with the Defense Department. 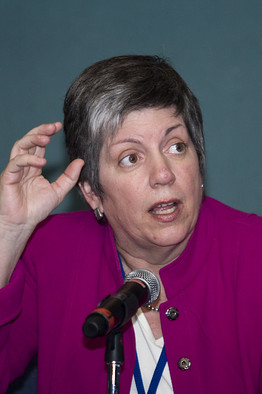 The FBI said in the memo that its conclusion about a surge in such activities was based on confidential sources, undercover operations, reporting from other law-enforcement agencies and publicly available information. The memo said the main goal of the multipronged operation was to get a better handle on “the scope of this emerging threat.” The operation also seeks to identify gaps in intelligence efforts surrounding these groups and their leaders.

The aim of the FBI’s effort with the Defense Department, which was rolled into the Vigilant Eagle program, is to “share information regarding Iraqi and Afghanistan war veterans whose involvement in white supremacy and/or militia sovereign citizen extremist groups poses a domestic terrorism threat,” according to the Feb. 23 FBI memo.

Michael Ward, FBI deputy assistant director for counterterrorism, said in an interview Thursday that the portion of the operation focusing on the military related only to veterans who draw the attention of Defense Department officials for joining white-supremacist or other extremist groups.

“We’re not doing an investigation into the military, we’re not looking at former military members,” he said. “It would have to be something they were concerned about, or someone they’re concerned is involved” with extremist groups.

Mr. Ward said that the FBI’s general counsel reviewed the operation before it began, “to make sure any tripwires we set do not violate any civil liberties.”

Some Republican lawmakers, talk-show hosts and veterans groups complained this week after the internal DHS assessment cited the potential for the same extremists groups to target returning combat veterans for recruitment. The Democratic chairman of the House Homeland Security Committee, Rep. Bennie Thompson of Mississippi, also echoed the concerns.

The separate DHS assessment, leaked this week after being sent to law-enforcement agencies, said the “willingness of a small percentage of military personnel to join extremist groups during the 1990s because they were disgruntled, disillusioned or suffering from the psychological effects of war is being replicated today.” Veterans could draw special attention, the report said, because of their advanced training.

Rep. John Boehner of Ohio, the House Republican leader, said Wednesday he was offended that veterans were characterized as potential domestic terrorists.

Amy Kudwa, a DHS spokeswoman, said Thursday the report was issued before an objection about one part of the document raised by the agency’s civil-rights division was resolved. She called it a “breakdown of an internal process” that would be fixed.

Documents detailing the operation are unclassified, but were meant for internal distribution only.