Frank Lindh,Â the father of the man commonly known as the American Taliban, spoke to Lecturer Richard Flynn’s English 1B classes in a teleconference on Thursday morning.

Why is Ahmadinejad interfering in the Roxana Saberi case?

With thanks to Carl in J’lem and Debbie Schlussel, who cuts through the BS: 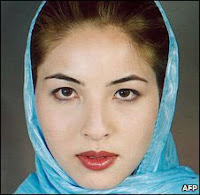 The New York Times reports that Iranian President Mahmoud Ahmadinejad has asked an Iranian prosecutor to re-examine the case ofÂ Roxana Saberi, who was sentenced to eight years in Evin prison in Tehran last week.

In Mr. Ahmadinejad’s letter, he urged Tehran’s prosecutor general, Saeed Mortazavi, to examine the cases fairly, the official IRNA news agency reported. Although the court’s workings are secret, Mr. Mortazavi, known as a hard-line conservative, would be the one to at least oversee the prosecution of both cases.

The letter was written by the president’s chief of staff, Abdolreza Sheikholeslami, on behalf of the president, who left Tehran for Geneva on Sunday to attend the United Nations conference on racism.

“At the president’s insistence, you must do what is needed to secure justice and fairness in examining these charges,” the letter said, IRNA reported. “Take care that the defendants have all the legal freedoms and rights to defend themselves against the charges and none of their rights are violated.” Â Read it all>>

Debbie Schlussel has aÂ very different take on Saberi, which may raise some other possibilities as to why Ahmadinejad may be trying to help her.

Roxana Saberi made her career as an apologist for Iran in her gushing reports for BBC, NPR (National Public Radio a/k/a National “Palestinian” Radio), and other media outlets for whom she freelanced over how “liberal” the country is. One of those pandering reports, ironically, was from a soccer match, where others of her gender are not allowed to attend and are sent to jail when they do. But not her. She was privileged in Iran and used that privilege as a platform to be a blatant sop. But she used her privileged position to promote the country endlessly and unapologetically. And now that she’s been arrested and tried, it’s poetic justice at its finest.

While Ms. Saberi could travel to and from Iran at will, hundreds of Iranian Jews are still not allowed to leave. When one of them does leave, his/her family members are held hostage by the government of Iran, until they return. Instead of covering things like this, Ms. Saberi painted a picture of Iran as Candyland, where everything’s coming up lollipops and gum drops. Even her father, Reza Saberti of Fargo, acknowledged, she’s “only used her position to promote this country [Iran]. For this woman, I’m supposed to be concerned? Whatever she gets, she deserves. Maybe her story will teach other far-left reporters that apologizing for Iran won’t protect you, even in Iran.

One thought on “Looking for suckers: why is Ahmadinejad interfering in the Roxana Saberi case?”