Obama meant to add that the Islamic killer shrink Â “acted stupidly”- Â but David Axlerod unplugged his teleprompter before he could finish his ridiculous remarks.

AP: “Anti-Muslim Backlash Immediate” — but offers not even one example

Ft. Hood jihadist’s cousin: “If he had killed one or two, I could say that he was defending himself.”

“There was racism towards him because he’s a Muslim, because he’s an Arab, because he prays,” the cousin said in aÂ CNN interview in the Palestinian city of Ramallah. “They used to see him dress in traditional Muslim clothing, so he wasÂ a bit irritated because of this.

The massacre at Fort Hood and Muslim soldiers with attitude

Allahpundit at Hot Air has aÂ massive, blow-by-blow post on all the latest developments. TheÂ Christian Science Monitor profiles Nidal Malik Hasan, the Muslim soldier identified by the military as the shooter… more>> 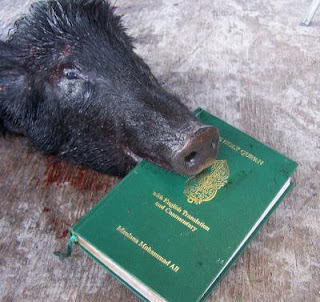 An outbreak of honor killings in America

The Killer Shrink is Now the Victim

What did cruel Americans do to make a poor Muslim snap?

SBS, our taxpayer-funded multicultural station, reports tonight onÂ the Muslim soldier who killed 13 of his American colleagues, while shouting “God is great”. The reporter says investigators are still searching for a motive, and presenter Lee Lin Chin adds:

And later in the program we’ll be examing some of the problems faced by Muslim soldiers in the US military.

From once great Britain:

FEAR THAT UK ISLAMIC SCHOOLS MAY GROOM CHILDREN FOR TERROR FEARS are emerging that vulnerable children might be groomed for religious extremism or even terrorism at taxpayers’ expense.

Muslim pupils are being taken out of classes and sent to study at Islamic schools, or madrassas.

A pilot scheme, the Open Madrasah Network, has received a Â£550,000 government grant to pay for under-achievers to attend lessons in Arabic, Urdu and religion.

The Dance around the Truth

A Dutch writer living in politically correct America says what too many are afraid to say.

There is only one term that adequately describes the massacre at Fort Hood: a terrorist attack. The media tries to avoid this term, but the more that isknown about the killer, the more it becomes clear that this premeditated and deadly attack on unarmed soldiers and civilians was driven by his belief that Islam should rule the world.

In politically correct America, this massacre will lead to intensified efforts to find explanations which fit into the progressive worldview. It justÂ can’t be true that a serious adult like the perpetrator starts killing because he feels justified to murder infidels.

Within hours, liberal commentators were able to find all kinds ofÂ explanations for his attack. The killer was a victim of verbal abuse or of a military that would send him, a soldier, to war. Or he was a victim of the insensitivity demonstrated by women (he wasn’t able to find a wife who was as religious as he was) or of whatever was available to deny the very core of this man’s existence: his unshakable belief in Allah and His final Messenger. But a gunman who shoutsÂ “Allahu Akbar” while killing unarmed people is exactly what he purports to be: a killing warrior for his God.

In a shocking interview on Fox News, one of Major Nidal Malik Hasan’s family members started the Â sanitization of the murderer. The family may have known about this killer’s radicalization. He was quite open about his belief system, about his efforts to convert colleagues and patients, about his opposition to America’s wars. Apparently, they thought it wasn’t unusual that aÂ devout Muslim was as radical as he declared himself to be.

But isn’t this strange? A huge civilization of more than a billion Muslims accepts the daily atrocities of suicide killings without showing its disgust. Never a mass rally, never a demonstration against the creatures that kill women and children in markets in Pakistan, Afghanistan, Iraq, and, if they get the chance, in the West.

The Muslim world accepts these atrocities as long as infidels or Jews aren’t involved. How many copies of the Koran have been destroyed in the hundreds of attacks by Muslims on Muslim believers and their mosques? But one rumor about the desecration of a copy by an infidel can lead toÂ violent eruptions.

2 thoughts on “Moe's Jihad News: "Lets not jump to conclusions…"”