So this is what it has come to — this is the fruit of the long-term efforts by groups such as the Council on American-Islamic Relations and others, to stigmatize and demonize everyone who speaks honestly about the threat of jihad and Islamic supremacism. People are afraid to speak up about what they see, when they know it is wrong.

WHY WAS MALIK NADAL HASAN IN THE U.S. MILITARY?

Major Malik Nadal Hasan, who opened fire on American troops at Fort Hood, was an Army psychiatrist who decried the U.S. invasion of Muslim lands, condemned the wars in Iraq and Afghanistan, and voiced his support of the global jihad.

But he was never taken to task for his views by his commanding officers and never reprimanded for his anti-American tirades.

Hasan was a devout Muslim who was born in Virginia to Palestinian parents who immigrated from Jordan.

He despised Christians and Jews and the principles of American democracy.

Why was a radical jihadist serving in the U.S. Army?

Why was he granted rank and privilege until he drew his weapons and proceeded to mow down 43 soldiers, killing 12 and wounding 31, on a“secure” military post.

The answers to these questions come from the 14th Annual Arab InternationalÂ Festival, which was held in Dearborn, Michigan from June 19 to 21.

The event was sponsored not only by the Ford Motor Company (we thought they were bankrupt) and the American Arab Chamber of Commerce but also (get this) by the FBI, the CIA and various branches of the U.S. Armed Services, including the Army.

The 250,000 people who attended the event munched on rolled pita sandwiches, shawarma, tabouli, hummus and baklava. The men, in many cases, wore throbs and ghutras; the women were draped in black burqas, or western jeans, accented with veils.

Representatives from the all branches of the U.S. Military â€“ â€“ Army, Navy, Marines, and Air Force Armed forces â€“ â€“ promised American citizenship to every Mid-Eastern immigrant willing to enlist â€“ â€“ as long as they were Muslims â€“ â€“ Christians and Jews were excluded from the offer. G.I. Issued uniforms were emblazoned with Arabic script in case prospective recruits could not understand terms such as “United States Army”. 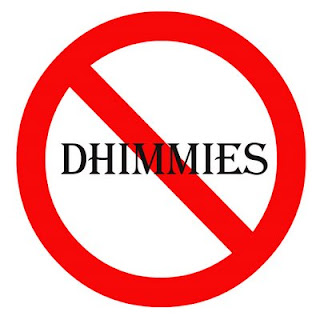 The FBI, not to be undone, set up a booth to recruit Muslim agents, and the CIA conducted raffles in order to entice young Islamists to enter the cloistered world of U.S. Intelligence.

The few Christians, who dared to venture forth on Warren Street to attend the festive gathering, were prohibited by law from distributing religious tracts and materials.

The order, which prohibited religious freedom to the Christians, came from U.S. District Judge Nancy Edmonds.

While there never has been a disruption of the public peace by Christians during the annual event, the Dearborn police kept vigilant watch for any Baptist or Pentecostal intrepid enough to violate the ruling to suppress their religious freedom.

No such stout-hearted soul appeared with tract, rosary, or Bible in hand, except for an inspired group of young Arab Christians and ex-Muslims. Rick Warren’s disciples and the Joel Osteen militia were conspicuously absent as innocent Christians were set upon with violence and threats.

Serving their Islamic masters, the Dearborn Police defied their oath of office to protect the violent 5th columnists and joined in the unconstitutional intimidation of the Christians.

No native-born American Christian had the guts to stand with the victims of Islamic Jihad in Dearbornistan.

Of course, the Muslims were not prohibited from distributing their tracts (mostly to the African Americans in attendance) and selling Islamic books and materials.

Fay Beydoun of the American Arab Chamber of Commerce in Dearborn told the Detroit News there was “no problem” with the Christians being at the event, “but we do have to think about the safety of everyone.”

The ruling by Judge Edmonds caused Richard Thompson, president of the Thomas More Law Center, to quip: “It’s ironic that while Americans are applauding the free speech exercised by hundreds of thousands of Muslims on the streets of Iran, the city of Dearborn is restricting free speech rights Christians are attempting to exercise on the city’s public sidewalks.”

Christians by the hundreds, representing major local and national mainline denominations were more than pleased to fly into Dearborn,Â  to act as dutiful dhimmis by cleaning the streets, attending to the Muslim children, and maintaining the Porta-Potties.

And the Army managed to obtain over 40 Muslim recruits.

A few came to serve at Fort Hood under Major Hasan.

Retired Col. Terry Lee, who said he worked with Hasan at Fort Hood, told Fox News he heard the gunman say at a conference that Muslims should stand up and “fight against the aggressors.”

Lee said that at first, he and his colleagues thought Hasan meant that Muslims in Iraq and Afghanistan should join forces with the U.S.

But, based on other comments Hasan made, it became clear he was encouraging Muslims to resist U.S. forces, Lee said.

Hasan, according to Lee, expressed happiness about the shooting of two soldiers by a Muslim convert outside an Arkansas recruiting center in June.