Airline Shrugs Off Passenger Concerns as Another Muslim Behaves Badly on U.S. Flight…

Here’s some good news for the civil liberties of Al Qaeda:

“Iran has executed two men arrested during the period of widespread unrest that erupted after June’s disputed presidential election, reports say.”Â The BBC hasÂ the rest of the story.

Copts to hold peaceful demonstration in Toronto against Muslim persecution 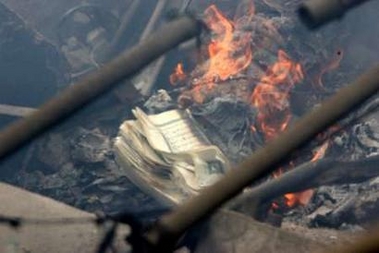 Rod Liddle: Â We should not absolve Islam of the crimes committed in its name /of course not. The question is why do we bend over and make these idiotic excuses?

White British people are being steadily ethnically cleansed from Britain’s second largest city. A new report by Birmingham City Council has confirmed that 61 percent of all primary school children are Asian or from other non-British ethnic groups.

This case could become a test case for the clash of cultures in Britain. Will British law bend to Sharia and allow polygamy on an open and legal basis instead of winking at it and tolerating it as it largely does now? Or will it draw the line and say that one law applies to all people there, and that polygamy is against the law?

“Man charged with bigamy,” fromÂ The Asian News, January 27 (thanks to JW):

A MAN suspected of being married to two women at the same time has been charged with bigamy.Restaurateur Fazlur Rahman, of Gowers Street, Heybrook, was arrested at Manchester Airport on Thursday night and charged with bigamy and an immigration offence.

It is believed that police swooped as the 42-year-old flew back into the country from Lanzarote, where he owns a restaurant in Fuerteventura….