“The Flag of Islam Will Fly High Over This Building”

As mentioned earlier tonight, Anjem Choudary is engaged in a little judicious arm-twisting and intimidation of the Norwegian government in an attempt to spring his esteemed colleague Mullah Krekar from the slammer.

Mr. Choudary insists that all his talk of exchanging Norwegian hostages for the Merry Mullah does not constitute a threat. Not at all! He is merely trying to help the Norwegian government “understand the reality of the situation.”

From Gates of Vienna:

The notorious Ilford firebrand Anjem Choudary has called for the kidnapping of Norwegian citizens abroad to exchange for the notorious Oslo firebrand Mullah Krekar, who has been detained after being convicted of making certain… ahem… indelicate public statements.

Our Norwegian correspondentÂ The ObserverÂ has translated an article about the latest antics of the Jumpin’ Jihad Jokesters. He includes this note:

The article claims that Choudary is calling on Muslims around the world to kidnap expat Norwegians in order to get Mullah Krekar out of jail.

For those interested, there is also an onlineÂ interview with ChoudaryÂ on NRK.no. 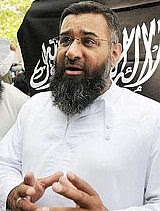 The British jihadist Anjem Choudary is calling for Muslims to kidnap Norwegians living abroad in order to get Mullah Krekar out of jail.

Choudary told NRK that it’s the duty of all good Muslims to ensure that Mullah Krekar gets out of jail, and that one has to be willing to use all necessary means in order to achieve this goal.

2 thoughts on “Anjem Choudary helps Norway 'to understand the situation'”