Below is the prepared text of speech given last night byÂ Elisabeth Sabaditsch-WolffÂ at the Ahavath Torah Congregation in Boston. 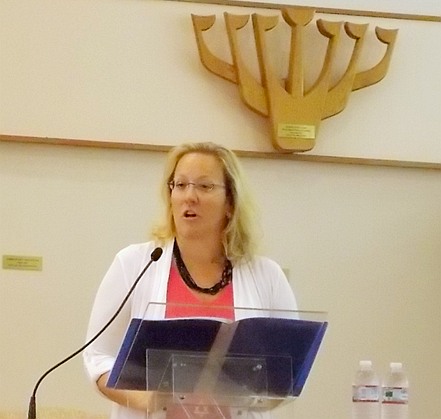 “Death Can Be Silent – The Present State of Free Speech in the U.S., Europe and Beyond”

I am here tonight to discuss the ominous and growing threat to free speech in the Europe, the United States, and the rest of the Western world.

I’ve never been to a synagogue before â€” although I have visited many mosques! I’m humbled to stand here before you. Thank you, Rabbi, for inviting me and giving the me the opportunity to exercise my freedom of speech.

He and I have a connection: his paternal grandmother was an Austrian, and if his English weren’t so good, we would be able to get by in Yiddish and German.

I’ve just recently learned that the audience for my talk may be larger than I had previously thought. In addition to the listeners gathered here in Stoughton, my words may be recorded by NSA and digitally stored in a huge database â€” all part of the struggle against “terror” and “violent extremism”. Since this congregation is a non-profit organization, the IRS may also be listening in, just to make sure that what I say here is compatible with your tax-exempt status.

If my words ever happen to be passed on through the social media, the person who posts them may be subject to criminal penalties. Yes, that’s why U.S. Attorney Bill Killian went to Manchester, Tennessee a couple of weeks ago: to discuss using federal civil rights laws to punish those who make critical remarks about Islam.

Such is the current sorry condition of free speech the United States of America.

If it’s that bad here, what must conditions be like elsewhere? This nation used to be a beacon of liberty, the shining city on a hill that inspired the entire world â€” what has happened to it?

I can tell you from my own experience that Europe has slid even farther down the slippery slope to tyranny.

We, too, live under constant surveillance by our own governments.

The security services in Britain and Sweden are entitled by law to record and store all forms of electronic communications â€” telephone, text messaging, internet usage, and so on.

But Europe has gone beyond mere surveillance. Member states of the European Union have implemented what is commonly known as the “Framework Decision”, which is a directive that requires all countries to pass laws that criminalize public incitement to “hatred” against “a group defined by reference to race, colour, religion, descent or national or ethnic origin”. This directive came into force in November 2010, and is binding on all states that signed the Lisbon Treaty.

So, as you can see, we Europeans don’t have any fundamental law that protects us as your First Amendment protects you. Our fundamental laws â€” which are created by unaccountable bureaucrats in Brussels â€” actuallyÂ give licenseÂ to the state to persecute us. We have no protection from state repression if we choose to criticize Islam.

Most countries in Europe have been gung-ho to implement the EU’s diktat. So many people have been harassed, detained, arrested, prosecuted, and convicted for criticizing Islam that it would be impossible for me to mention them all. To read a full list, even if it were possible to compile one, would take several hours at least.

But let me give you a brief representative sample of Europeans who have been persecuted by their governments for their opinions on Islamization:

From Britain:Â Stephen Yaxley-Lennon, a.k.a. Tommy Robinson, the founder and leader of the Islam-critical English Defence League, has been tried repeatedly on various contrived charges, and convicted on some of them. Late last year he spent several months in solitary confinement before he even made his first appearance in court.

From Denmark:Â Lars Hedegaard, a well-known journalist and historian, was tried for describing in a private conversation the tendency for Muslim men to rape their underage female relatives. He was acquitted by a lower court. The prosecutor appealed the case to a higher court, which overturned the acquittal and fined the defendant 5,000 kroner. He appealed the decision to the Danish supreme court, which overturned the conviction again.

From Finland:Â Jussi Halla-aho, a journalist and local politician, was tried for giving examples in his blog of things about immigrants that were now illegal to say. He was convicted and fined, and lost his appeals to all higher courts. He also lost his position within his party, the True Finns.

From France:Â Philippe Val, the editor of the satirical magazineÂ Charlie Hebdo, was sued by a Muslim group for publishing the Danish Mohammed cartoons. He was acquitted in court.

From Germany:Â Michael StÃ¼rzenberger was tried for using a photo of Heinrich Himmler as an analogy with Islam. He was acquitted, but the prosecutor is appealing the verdict to a higher court.

From the Netherlands:Â Geert Wilders, the leader of what may now be the most popular party in the country, was put on trial not once, but twice for expressing his opinions on Islam. After a lengthy and expensive court process, he was acquitted in both cases.

From Sweden:Â Carl P. Herslow, a local politician, posted a campaign placard of Mohammed and his wife Aisha, with the caption: “He is 53 and she is 9: Is this the kind of wedding you want to see here?” He was charged with “incitement against an ethnic group”, tried, and eventually acquitted.

From Switzerland:Â Avi Lipkin, a.k.a. Victor Mordecai, was tried and convicted of “inciting hatred or discrimination against a person or a group of persons on the grounds of their race, ethnic origin or religion”. His “crime” was committed during a discussion about the upcoming referendum on the minaret ban, when he read verses from the Koran requiring Muslims to hate Christians and Jews. He was convicted.

That was an alphabetical list, but I left out Austria, becauseÂ thatÂ case is my own.

Fascist totalitarianism has returned to my country. This time it does not come with the ring of jackboots on the cobblestones. No one’s door is battered down in the middle of the night. No cattle cars haul innocent victims away to an unknown destination.

This is a soft totalitarianism. It wears a business suit, smiles, and speaks in reasonable tones in the name of tolerance and diversity.

This time its victims are the natives of Austria, who are being deliberately replaced with a violent, barbaric, alien culture.

I am one of those victims.