Syria: if you don’t know what to do, don’t do anything…Â

Of course it’s not regime change. Libya wasn’t about regime change either. What possible reasonÂ could we have to doubt Jay Carney’s claimÂ aside from the fact that Obama is arming and training Syrian rebels who want to oust Assad.

US Forces to Punish Syria, not Push Regime Change

Idiotic. “Â if you don’t know what to do, don’t do anything…” Miles Davis

To those of us lacking in nuance, that might seem like a regime change move. But clearly that can’t be so. It would mean that Obama Inc. is lying to us.Â Daniel Greenfield has more….
.
Iranian Foreign Ministry Spokesman Seyyed Abbas Araqchi has rejected recent Israeli media reports that Syrian President Bashar al-Assad has flown to Iran. (Disputed)
.
Obama crosses red line by supporting jihadi terrorism

By now it should be obvious that whenever the U.S. interferes in another nation’s politics in the name of “human rights,” that that is only a pretext. 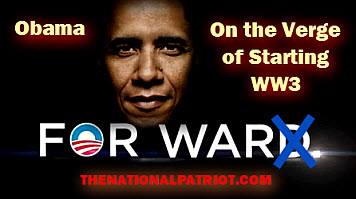 NYT: ‘Bomb Syria, Even if It Is Illegal’

Never thought I would agree with Kucinich on anything….

The BBC is facing criticism after it “accidentally” used a picture taken in Iraq in 2003 to illustrate the senseless massacre of children in Syria. 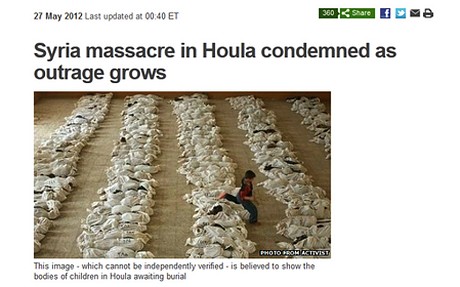 Photographer Marco di Lauro said he nearly “fell off his chair” when he saw the image being used, and said he was “astonished” at the failure of the corporation to check their sources.

Robert Spencer in FrontPageMag: What’s Wrong with Going into Syria

American military intervention in Syria is likely to begin this week, and one thing we know amid the general confusion is that the objective is not to oust Bashar Assad: White House spokesman Jay CarneyÂ said Tuesday: “I want to make clear that the options that we are considering are not about regime change. They are about responding to a clear violation of international standard that prohibits the use of chemical weapons.” How the Obama Administration plans to deal with Assad’s alleged use of chemical weapons without challenging his grip on power is unclear, but then again, so is everything else about this misadventure.