Right on the heels of the Palestinian Authority’s annual bizarre labeling of Jesus as being “Palestinian,” Lebanese media are reporting that he was in fact – “Lebanese.”

Â Jesus was a “Palestinian?”

That would put Jesus in interesting company.

What does Jesus have in common with Palestinian Arab terrorists?

And Santa was a rock-throwing Palestinian too, right?

In his annual Christmas message Palestinian President Mahmoud Abbas called Jesus a Palestinian messenger of hope. (He forgot the change.)

Jesus was a Jew. He was not a “Palestinian”. 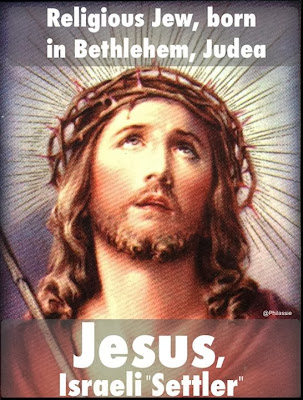 The ‘Palestinians’ have been trying to market Jesus as one of them.Â That’s just another lie.Â Carl in Jerusalem

Much has been written about Mahmoud AbbasÂ referring to Jesus as “Palestinian”Â in a Christmas address. But the rest of his Christmas message is no less offensive, as he attempts to use the Christian holy day as an excuse to extensively bash Israel. Â Here is theÂ entire message.

Abbas also talked about the impending release of more murderous terrorists -Â at the Church of the Nativity.

Don’t Christians find Abbas’ nauseating attempts to hijack the holiday for his own political purposes to be hugely offensive? Why is there no outcry about this cynical and sickening politicization of Christmas?

Israel to Abbas: No, Jesus was not a Palestinian

“He should have read the Gospel before uttering such offensive nonsense, but we will forgive him because he doesn’t know what he’s doing,” Foreign Ministry spokesman Yigal Palmor told The Times of Israel on Monday. Abbas’s statement is an “outrageous rewriting of Christian history,” according to Palmor.

No Jews allowed in Judea

Dr Vacy Vlazna is “Coordinator of Justice for Palestine Matters.”

She appeals to the pope to give a helping hand to release the “suffering people of Gaza from the genocidal strangulation of Israel’s seven-year blockade.”–There is no end to this BS.

Omar Barghouti is an independent Palestinian human rights activist and a founding member of the BDS movement.

There is no such thing as an “independent Palestinian human rights activist”. Bargouti is a radical headbanger Â and a representative of the Muslim ummah, just like Hamas, al Qaeda, Islamic Jihad or the PLO. There is no difference.

He is also full of shiite:

“… A South Africa moment is being reached by the BDS movement…”

The movement calling for the boycott, divestiture and sanction of Israel is gaining momentum globally.

“Leading academicians and artists, as well as some church groups, have headed BDS’ call” [AP]

Dozens of American colleges and universities are rejecting an academic boycott of Israeli universities recently approved by the academic American Studies Association, the nation’s oldest and largest association devoted to the interdisciplinary study of American culture and history. And a few schools said they are withdrawing from the organization. 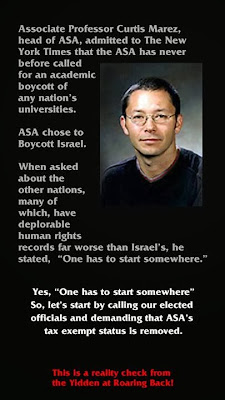 Indiana University has become the fourth academic institution toÂ withdraw from the American Studies AssociationÂ over the latter’s boycott of Israel.

Indiana UniversityÂ is the latest academic institution to announce its withdrawal from the ASA in protest of the boycott decision. Indiana University President Michael McRobbie noted the chilling effect such boycotts have on academic freedom.

The university joins Kenyon College, Penn State Harrisburg, and Brandeis University, which already announced theirÂ withdrawal from the ASA. Other prominent institutions of higher learning, including Harvard and Brown, have spoken against the boycott but refrained from moving against it formally.

Perhaps the biggest blow against the ASA, however, came this week in a strongly-wordedÂ condemnationÂ from the Executive Committee of the Association of American Universities:

The statement also asserted that the boycott “clearly violates the academic freedom not only of Israeli scholars but also of American scholarsÂ who might be pressured to comply with it.”

This is quickly becoming a trend…..

“Palestine was the Greco-Roman name for a region. In the year 135 AC, the name of the region became the official name of one of the provinces of the Roman Empire in an attempt to obliterate the connection between the Jewish people and Judea – the land they’ve inhabited for over 1000 years.

However, like Antarctica, the Amazons or the Sahara, naming a place doesn’t create a nation of Antarcticans or Saharans.

Oh, and for the record, Jesus was not a Palestinian, he was a Judean Jew.”

Let’s go to the videotape. (Carl)

7 thoughts on “No, Jesus was not a Palestinian (and Santa wasn’t black)”