Abbas’s Spokesman: Livni Unfit to be a Negotiator

It is not often that I agree with an Abbas spokesman:

PA spokesman takes issue with Livni’s comments that Abbas will “pay the price” for his hardline positions.

Â Livni said that by refusing to recognize Israel as a Jewish state, PA Chairman Mahmoud Abbas has taken positions “that are unacceptable to us or to the rest of the world.”

How a Jew was tortured to death in France because he was a Jew.

Seven years ago, at the outskirts of the Ville LumiÃ¨re, Paris, a Jewish boy named Ilan Halimi was kidnapped and held prisoner for twenty-four days, tortured to death because he was a Jew. A poor human torso to dismember and throw in the street, as you do with the remains of dinner, thrown to the dogs. (Pamela Geller documented it here)

All that was to remain of Ilan Halimi was his name.Â (Giulio Meotti)

Only Mustards are allowed to threaten the Jews, not the other way ’round:

Fatah must “join all of the organizations, both those operating under the Palestinian Authority, and those outside it,” he added, in an apparent reference to Hamas and Islamic Jihad. Hamas remains openly committed to obliterating Israel, while Islamic Jihad recentlyÂ threatened to resume suicide bombings.

An open letter to Isi Leibler 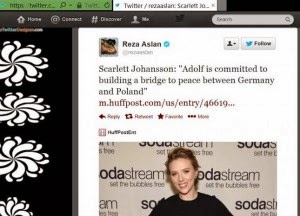 Iranian-American writer and academic, Reza Aslan, compared Israeli company SodaStream to Adolf Hitler and implied that its newly minted spokesperson, actress Scarlett Johansson, was a Nazi supporter in a tweet on Friday afternoon that he quickly deleted.

“Scarlett Johansson: Adolf is committed to building a bridge to peace between Germany and Poland,” Aslan wrote, linking to a Huffington Post article in which the actress responds to critics of her representation of the soda machine maker.

“SodaStream is a company that is not only committed to the environment but to building a bridge to peace between Israel and Palestine,” Johansson said in a statement, which Aslan then modified to make his point. The company is “supporting neighbors working alongside each other, receiving equal pay, equal benefits and equal rights,” she said further. “That is what is happening in their Ma’ale Adumim factory every working day.”

SodaStream says it employs 550 Palestinian Arabs who are afforded the same benefits as Israeli workers at its Ma’ale Adumim plant in the West Bank.

Although Aslan’s comment was quickly deleted from his account, a screenshot, pictured above, was captured by Algemeiner blogger Petra Marquardt-Bigman. “Oh well,Â @rezaaslanÂ was apparently embarrassed enough to delete the tweet – but I have a screenshot,” Marquardt-Bigman tweeted.

Aslan made headlines last year whenÂ he responded indignantly to a Fox News reporterÂ who asked him why, as a Muslim, he had written a book about Jesus.

“Well, to be clear, I am a scholar of religions with four degrees including one in the New Testament and fluency in Biblical Greek, who has been studying the origins of Christianity for two decades, who also just happens to be a Muslim. So, it is not that I am just some Muslim writing about Jesus, I am an expert with a PhD in the history of religions,”Â he said at the time.

My first-ever holiday party was going great until someone in the living room wanted club soda for his vodka. It’s not that I wasn’t prepared. I was in the kitchen, overseeing eggnog, and I handed my co-host a bottle of seltzer made for the occasion with my SodaStream countertop carbonator. He’s the one who told me what happened next.

“Enjoy your Palestinian blood cocktails,” the left-wing reporter said to the vodka drinkers …

At a Thanksgiving with college friends, the appearance of SodaStream’s distinctive, reusable bottles was met with similar tut-tutting. “Blood bubbles,” someone called them. Defending herself, the hostess said the machine had been a gift. Now I say that too, even though I bought mine myself.