JustÂ another day in Gaza. (from the Elder)

This is an Islamic Jihad rally to denounce any possible peace deal – because any deal would allow Israel to still exist, which is against Palestinian Arab principles.

Dr. Mohammed al-Hindi, a member of Islamic Jihad’s “political wing,” spoke and led the crowd in both marching and in the obligatory stepping on an Israeli and American flags. 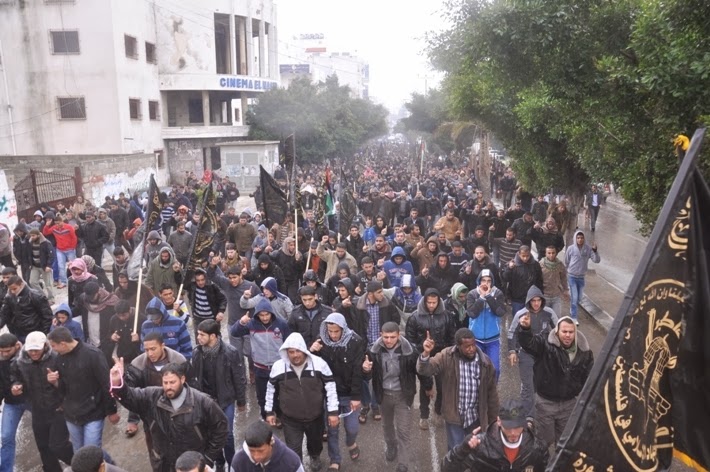 More on John Kerry’s uncreative peace fantasies below the fold.

Just as black people struggled for their rights and basic human dignity during the American Civil Rights Movement, so the Jews continue to struggle for our rights and basic human dignity within our 3,500 year old national home. Just as native peoples everywhere seek to free themselves from the negative influence of hostile conquering populations,Â so the Jews of the Middle East seek to free themselves from the never-ending hostility of their former masters in that part of the world.
The so-called “Palestinian national movement” is not a national movement of an indigenous people.Â It is a national movement designed specifically to overthrow the indigenous people and replace that people with the very people who conquered them and held them in something akin to servitude (dhimmitude) for thirteen long centuries.
Like indigenous peoples throughout the world, the Jewish people, too, are worthy of self-determination and self-defense.

Hollywood actress Meryl Streep blasted Walt Disney as an anti-Semitic misogynist in an unusually long and scathing speech at a film awards dinner on Tuesday night, Variety reported on Thursday.
Ironically, Streep’s nine-minute speech was to honor the actress who portrayed ‘Mary Poppins’ creator P.L. Travers in The Walt Disney Company’s ‘Saving Mr. Banks,’Â Emma Thompson, who the Zionist Organization of America denounced on Thursday for her letter in the Guardian advocating for a boycott of Israel’s Habima Theater troupe, which is to perform later this year at Shakespeare’s Globe Theater, in London.

Anti-Israel activists deliberately manipulated footage of Nelson Mandela, speaking at a 1990 Town Hall meeting anchored by Ted Koppel on ABC Nightline in New York, in an effort to eliminate his declaration “The support for Yassir Arafat in his struggle does not mean that the ANC has ever doubted the right of Israel to exist as a state. We have stood quite openly and firmly for the right of that state to exist within secured borders”
Lies. Manipulation. Selective editing. Could these ethically bankrupt anti-Israeli propagandists stoop any lower?

John Kerry Has A Lot To Learn

…the American plan is unsophisticated, and does notÂ answerÂ the needs of both sides,” the officials said. “There is noÂ connectionÂ between the positive statements Kerry is making in public and the details of the deal.Â He is, to put it mildly, very unfamiliar with the roots of the conflict, and as a result is incapable of bringing true solutions to the table. He can’t even read maps of the region properly,” the officials added.

Lean, languorous, pleasure-loving (Bobby Short at the Hotel Carlyle, liquor on the Elizabeth Islands, and other forms of recreation too that have been known to get men in trouble), this long-time member, and recently Chairman, of the Senate Foreign Relations Committee, is ill-prepared for dealing with the Jihad. A limited lemming, he wants to think, does think, what everyone else thinks. And what do they think? They think the Arab war on Israel has nothing to do with Islam. They think that those who bring up such things as Hudaibiyyah are simply trying to throw an imaginary spanner in the worksl They think that war against Israel, by every conceivable means, is not deep-seated and permanent and rooted in Islam, but is merely a “problem” to which there is, of course, a “solution.” And the “solution” — we know it is a solution because that is what, formulaically, it is repeatedly called — is the “two-state solution.” The man of grave mien is essentially dumb, and cannot grasp that, militarily, Israel already must endure a diabolically difficult job of defending itself which, if it were to lose control over any more territory, would become even more hellish, and far from assuaging the Muslim Arabs (the shock troops of the Jihad being those who carefully-renamed themselves the “Palestinians” after the Six-Day War, for obvious propaganda reasons), will whet, not sate, their appetites. But by then, John Kerry will be long gone.

He’s dangerous, and casual, and shallow, not up to the task at hand. But who, among those in the Western world who presume to protect and instruct us, is up to it, that task being to protect us from the adherents of Islam? Kerry is not worse than a great many others. He’s merely representative. But right now, as Secretary of State, he’s making mischief, while thinking that because his heart is — he thinks — in the right place, surely his mind must follow.