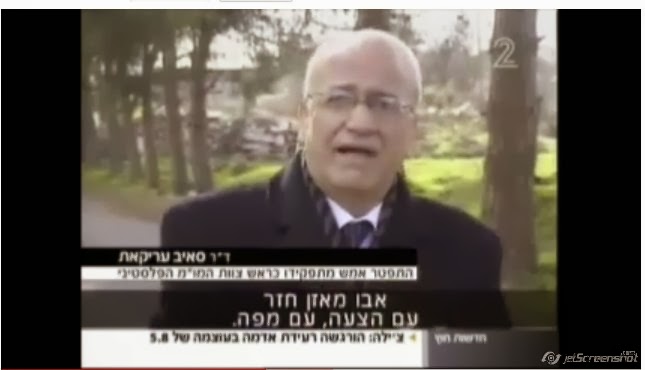 ‘Palestinian’ chiefÂ negotiatorÂ bottle washerÂ Saeb Erekat is blaming Israel for the impending failure of the ‘peace process,’ butÂ the only concessions he can name are the ones he refuses to make. (Carl in J’lem)

You need to read this to gain some basic understanding of what’s at stake here.

For the entire history of the Lesser Jihad against Israel, the promptings of that war from Islam itself have been largely obscured, obscured most of all from the Israelis themselves.

The original opposition of the Arabs to Jews buying land from landowners was naturally muted as long as the Arabs needed Western power to help them against the Turks. But as the earliest leader of the local Arabs — they were not then, not until after the Six-Day War, renamed the “Palestinians” — the mufti El Husseini — made clear, it was Muslims who opposed them, and it should be a common Muslim cause. It took quite a while. Arabs under French rule in North Africa, or miserably poor, and certainly distant from, whatever happened in Mandatory Palestine, would hardly have been in a position to participate in the Lesser Jihad, much less something wider in scope. The Dutch ruled in the East Indies; the British controlled India — in neither place did the Muslims possess the wherewithal to dream more dangerous dreams. Jihad never went away — how could it? — but the wherewithal to conduct Jihad was lacking.

In 1947, the Bishop of Beirut, Moubarac, understood clearly the Muslim basis of the Arab assault on Israel. His speech can be found in Bat Ye’or’sÂ Islam and Dhimmitude. The Jews of Israel, however, saw the conflict as one of Arabs who were opposed to the Jews. They knew very little, almost nothing, about Islam. They also knew that many of the local Arab Christians were echoing the sentiments of local Arab Muslims, and assumed, wrongly, that this meant that it was the “Arabs” who were hostile to them. They failed to realize that many of the local Arab Christians were classic dhimmis, who had accepted and internalized Muslim attitudes. That this phenomenon was observable in many communities of non-Muslims under Muslim rule was simply not understood.

The rhetoric of the 1948 attack contained all kinds of allusions to Islam. Azzam Pasha, Secretary-General of the Arab League (and great-uncle to Ayman al-Zawahiri) promised a massacre like that of the Mongols when they conquered the Jews. The still-weak Arabs, however, needed outside help, diplomatic and economic. They were in no position to start muttering darkly about a Jihad against the West.

Pan-Arabism, with which one associates the name of Nasser and then later of Saddam Hussein, who also saw himself as the Arab champion, the Saladin of our age (it didn’t matter that Saladin, another native of Tikrit, was a Kurd), was merely a realistic (for its day) subset of pan-Islamism. It was the Arabs who needed to be unified first, and no one could think beyond that goal. Nasser was hardly a Marxist. He was a local despot, with great appeal to Arab youths. This is one of the themes, played on a little too insistently and a little too plangently, by Fouad Ajami in his “predicament” of the Arabs, his “dream palace” of the Arabs shtick that very carefully avoids the subject of Islam.

The “secularists” were never that secular. If Nasser, and then Sadat, treated the Ikhwan, the Muslim Brotherhood, as a menace, it is because they were a menace to them — a political rival. But this did not make Sadat, in particular, a “secularist” (he actually favored, at times, the Muslim Brotherhood). Saddam Hussein was a Ba’athist because it allowed him to continue to pretend to have a regime open to all, Kurds as well as Arabs, Christians as well as Muslims, Shi’a Muslims as well as Sunni Muslims. And some of them were part of the government. But the real power remained that of Sunnis, and modern Iraq was essentially a Sunni despotism, mild under the monarchy, harsh from Qassem through to Saddam Hussein. Saddam Hussein knew perfectly well that the Shi’a far outnumbered the Sunnis, and that the opposition to him was most dangerous in the Shi’a mosques. It was to his advantage to minimize the political role of Islam, therefore, but whenever it suited him, he invoked Islam and Muslim history. The battles he spoke of when attacking Iran were the old battles against the Persians by the Islam-bearing Arabs. He was building the largest mosque in the world. He commissioned a Qur’an calligraphed using his blood for ink. He put a Qur’anic phrase on the flag of Iraq. Whether or not he was a deep Believer (in the days of his imprisonment he was Â reading the Qur’an with great intensity), he was certainly a Believer.

Against Israel, the rhetoric, the attitudes, the entire refusal to contemplate the permanence of an Infidel sovereign state, can all without difficulty be ascribed to Islam. The local dhimmis, such islamochristians as Hanan Ashrawi and Naim Ateek and others, promote the Muslim view and Muslim demands. That may confuse a few, but it should not confuse anyone familiar with the phenomenon.

The war against Israel is not an “ethnic” nor a “tribal” war by Arabs against Jews. When rants against Israel are repeated in Pakistan, or by Mahathir Mohamed in Malaysia, or by the assorted Islamic groups in Indonesia, one sees clearly that what is going on is prompted by the belief-system of Islam. It is a war against a non-Muslim state, by as many Muslims as care to participate. Some may have in the past been held in check by their own dislike of the Arabs. The Iranians and the Turks both make insistently clear that “we are not Arabs” and then go on to speak contemptuously of the Arabs. For a while, the national interests of Iran, as defined by the Shah and his advanced if corrupt coterie, included fair treatment of non-Muslims, and a reasonable attitude toward, even a kind of quasi-alliance, with Israel. Something of the sort seems to have developed, later on, between not Turkey but rather between the keepers-of-the-Kemalist-flame in the Turkish army, and some of its secularists, and Israel.

To assume that the war between the Arabs and Israel is ethnic or tribal ignores the rhetoric, the appeals, the views of Muslims as expressed through time and space. It ignores the simplest and most obvious truth: the entire world in the end belongs to Allah and his people, the best of people. And Israel, a sovereign state run by Jews, is a particular affront, not only for where it is situated (seeming to break up the continuity of one uninterrupted Arab Muslim landmass, as Arab Muslims see it — for them the Maronites, the Copts, the Berbers, the Kurds, have no rights, hardly exist in what Arabs, with a little help from ARAMCO, began decades ago calling “the Arab World” — a phrase that misleads, but stuck, so that it keeps on misleading), but because the traditionally despised Jews, despised because they had no power (unlike the local Christians, who at least could look to powerful co-religionists in Western Christendom) were in charge of that sliver of land.

The war of the Arabs against Israel is a “religious” war if we consider Islam to be a religion. It is promoted by, it springs from, the tenets, and attitudes, and atmospherics, of Islam. The Muslim Arabs know this. Other Muslims know this. Islamochristian Arabs pretend that it is not so. And the Israelis, of course, prefer not to recognize that it is so, because such recognition would also lead them to conclude, inexorably, that there is no end to this war, and that negotiations are merely occasions for Arab duplicity, as Muhammad (“War is deception”) demonstrated in his own treaty of Al-Hudaibiyya, which he made with the Meccans in 628 A.D., and broke 18 months later, when his side had increased its power. That, as Majid Khadduri notes, is the basis of Muslim treaty-making with Infidels. It always has been; it will remain such.

And the Muslims are not taught to permit Infidels to remain with some sliver of land where their rule will prevail — especially not on land once held by Muslims. So the recognition by the Israelis of the true nature of the war against them would also force them to conclude that not only are treaties largely pointless, but that there is no end to this, for the size of Israel is irrelevant to its acceptance by the Arab Muslims. If it further shrinks, however, it may tempt an attack, and the only way the peace can be kept is if the Arabs have an excuse not to attack. That excuse can be found in the idea of “Darura” or “necessity,” which can be invoked to justify inaction by Arab regimes.

Muslim Arabs, local (“Palestinians”) and non-local, understand perfectly why Israel will never be accepted and must in the end disappear. They differ on the instruments through which this may best be achieved. They differ on the amount of time it will take — there are the Rapid Jihaidsts of Hamas, and Hezbollah, and the Slow Jihadists of Abbas’s PLO. But the understanding of what the end result must be, at some point, is shared by all of them.

It is the Israelis, or many of them in the ruling elites, who refuse to see what is staring them in the face. It’s too upsetting. It would require seeing control of the “West Bank” as indispensable — control of the marches, of the invasion route, of the aquifers necessary for Israel to live. It would require ending the participation in the farce of this “Palestinian” people that the Israelis themselves refer to without any seeming understanding of the way that they thereby promote the “two-tiny-peoples” business, that which since the 1967 War began with the careful creation of the “Palestinian people” and has been so relentlessly used to present as a matter of competing nationalisms what is, in fact, a classic Jihad. Classic in aim, that is, but not classic in its instruments. For as with Western Europe, outright military conquest is unlikely.

Other methods are being employed.